Preventing Cancer and Diabetes by Not Drinking Sodas 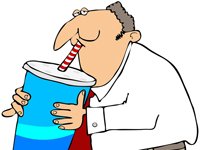 No one thinks of sugary soda as a healthy choice for a beverage.  But most drinkers will defend their habit by saying it isn’t dangerous, and a few glasses a day isn’t going to do any harm.  Unfortunately for them, soda drinkers may be very wrong.  A new study has found that consuming soda every day may be connected to the development of kidney disease.

The research, which took place at Osaka University in Japan, determined that adults who drink more than two sodas daily face a greater chance of showing early signs of kidney damage.1 Mann, Denise. “Sugary Soda Habit May Harm Kidneys, Study Suggests.” WebMD. 9 November 2013. Accessed 21 November 2013. http://www.webmd.com/news/20131109/sugary-soda-habit-may-harm-kidneys-study-suggests   The subjects were more than 12,000 adults employed by the university.  During their annual physical exam at the health center, the participants answered questions about their eating habits including the frequency of their soda consumption. Additionally, a urine sample was taken and analyzed for the presence of protein.  Protein in the urine is one of the initial signs of kidney damage, which is often still reversible at that point.

These differences may not seem enormous, but when the population sampled includes 12,000 individuals, that means several hundred more people were then suffering from an early symptom of kidney damage that can be associated with steady soft drink consumption.  And protein in the urine may indicate other diseases on the horizon as well as potentially serious kidney problems. A 2012 study at the Mario Negri Institute for Pharmacological Research in Bergamo, Italy found that even a miniscule amount of protein in the urine may be linked with an increased risk of cardiovascular disease in those with type 2 diabetes.2 Ruggenenti, Piero; et al. “Measurable Urinary Albumin Predicts Cardiovascular Risk among Normoalbuminuric Patients with Type 2 Diabetes.” Journal of the American Society of Nephrology. 30 August 2012. Accessed 22 November 2013. http://jasn.asnjournals.org/content/23/10/1717.abstract?sid=b5e25df5-7919-4e4e-9a14-7e4b40dabe04

While the current research was not designed to prove a cause-and-effect relationship between drinking soda and kidney disease, the evidence is mounting from other sources that sugar may be a key factor in damage to this organ.  A recent study conducted at Case Western Reserve University in Cleveland, Ohio discovered that even moderate amounts of fructose can alter the kidneys’ ability to properly regulate salt balance.  Maintaining the correct levels of sodium and water in the body is an important function of the kidneys.  Using rats as their study subjects, the scientists found that the changes taking place caused the cells of the kidneys to reabsorb a greater quantity of salt.  This may be why soda–which contains substantial quantities of high fructose corn syrup–has been implicated in the development of not only kidney problems, but also diabetes, high blood pressure, and obesity. This is bad news for people who are working on preventing diabetes. In fact, in 2010, researchers at the University of Southern California’s Keck School of Medicine in Los Angeles analyzed samples from numerous soft drinks and discovered that many contain even more fructose than their labels indicated.3 Ventura, Emily E. et al. “Sugar Content of Popular Sweetened Beverages Based on Objective Laboratory Analysis: Focus on Fructose Content.” Obesity. October 2010. Accessed 22 November 2013. http://goranlab.com/pdf/Ventura%20Obesity%202010-sugary%20beverages.pdf

And soft drink consumption is higher than ever, with a 2011 survey showing that carbonated soft drinks are the most commonly consumed beverages in the United States.4 Zmuda, Natalie. “Bottom’s Up! A Look at America’s Drinking Habits.” Advertising Age. 27 June 2011. Accessed 22 November 2013. http://adage.com/article/news/consumers-drink-soft-drinks-water-beer/228422 (Although sales have ebbed in the two years since.5 Stephanie Strom. ” Bottled Water Sales Rising as Soda Ebbs.” The New York Times. October 25, 2013. (Accessed 23 Nov 2013.) http://www.nytimes.com/2013/10/26/business/bottled-water-sales-rising-as-soda-ebbs.html ) Not to mention the fact that all those who are trying to avoid the sugar and reaching for diet sodas instead are no better off.  These artificially sweetened drinks have been linked to certain forms of cancer, cardiovascular disease, osteoporosis, osteoarthritis, and more. If preventing cancer is important to you then you should try to stay away from diet sodas.

Maybe an occasional glass of soda won’t hurt, but this is one habit with little redeeming value and plenty of potential for harm. Preventing diabetes and preventing cancer will be more difficult if you drink sodas on a regular basis. Switching to water will help properly hydrate your body, keeping the gastrointestinal tract and kidneys functioning optimally.  And if you look to your soft drink to get a little pep from the caffeine, consider making a cup of tea instead. Coffee is another option, but that offers considerably more caffeine, and it’s also a diuretic that dehydrates your body; so be careful not to drink too much or have it too late in the day if you want to avoid possible pitfalls like anxiety, insomnia, and kidney stones, which can be caused by dehydration.