The Defense of Diet Soda 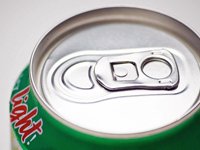 It’s hardly esoteric knowledge that soda isn’t a health food, so it’s a bit confounding that the industry is up in arms over an article just published in the American Journal of Clinical Nutrition citing a study that links the aspartame in diet soda to cancer.1 Schernhammer, Eva et al. “Consumption of artificial sweetener and sugar-containing soda and risk of lymphoma and leukemia in men and women.” 24 October 2012. The American Journal of Clinical Nutrition. 25 October 2012. <http://ajcn.nutrition.org/content/early/2012/10/23/ajcn.111.030833.abstract> The study involving 115,000 adults, out of Harvard School of Public Health and the Brigham and Women’s Hospital in Boston, found an elevated incidence of leukemia, non-Hodgkins lymphoma, and other blood cancers among those who regularly drank diet sodas. The results were poised for release to the public when suddenly, at the very last second, the story got nixed and media outlets were told to hold the presses.

According to an article in the NPR blog, “[The study was due] to be published at 3 p.m. Wednesday in the American Journal of Clinical Nutrition and released to reporters earlier in the week under embargo …but at 2:24 p.m.–about a half-hour before the paper was to publish–we and many other news outlets who had been working on the story got an email from the senior vice president of communications at Brigham and Women’s Hospital.”2 Aubrey, Allison. “Data Linking Aspartame to Cancer Risk are Too Weak to Defend, Hospital Says.” 24 October 2012. NPR. The Salt. 25 October 2012. <http://www.npr.org/blogs/thesalt/2012/10/24/163559533/aspartame-and-cancer-risk-new-study-is-too-weak-to-defend>

Apparently, the panicked email informed the press that the story wasn’t ready for prime-time because the data were weak. “It has come to our attention that the scientific leaders at Brigham and Women’s Hospital did not have an opportunity, prior to today, to review the findings of the paper,” wrote Erin McDonough. “Upon review of the findings, the consensus of our scientific leaders is that the data is weak, and that BWH Media Relations was premature in the promotion of this work. We apologize for the time you have invested in this story.”

The results showed that only men, not women, had higher rates of lymphoma because of the aspartame. Also, regular, non-diet soda correlated to elevated rates of these cancers, too, which the experts say undermines the data. In some cases, the elevated figures were marginal. “The results are really not that strong,” said Amy Subar of the National Cancer Center, and many of her colleagues agreed. Even so, the authors of the study insist that there’s enough evidence from the study linking aspartame to leukemia and lymphoma to warrant further research. “I do think this finding is strong enough to justify further study on aspartame and cancer risk,” said Harvard’s Walter Willet.

One might wonder what’s going on, given that Harvard isn’t wont to carelessly release unsubstantiated research. Why didn’t the press just print the story saying the results are preliminary? The thing is, this Harvard study comes right on the heels of another study that made diet soda look like a gift from the heavens. The study, from the Centers for Disease Control, found that teens who drank zero-calorie sodas rather than regular sodas gained four fewer pounds over the course of a year compared to the regular soda-swigging youth. “Our conclusion was quite clear,” said study director Bjorn Richelsen of Aarhaus University Hospital in Denmark. “Sugary coke led people to be slightly hungrier and to eat more. But Diet Coke had a more neutral effect on appetite. Volunteers did not increase their caloric intake in the four hours after drinking Diet Coke.”

Again, why would the press celebrate the story about the virtues of diet soda and squash the story pointing out that it might not be holy nectar, after all?

It’s not like aspartame has an unblemished past. According to a 2006 New York Times article on aspartame, all of the industry-funded studies on aspartame prior to that date had found it safe, while almost every single independent study (92%) found some significant problem with it, including a possible link to brain tumors.3 Cool, Lisa Collier. “Study Linking Aspartame to Cancer Deemed ‘Weak.'” 25 October 2012. Yahoo Health. 25 October 2012. < http://health.yahoo.net/experts/dayinhealth/aspartame-study-fuels-continued-debate> In 2007 it was linked to leukemia, lymphoma, and breast cancer. Way back in 1995, the FDA head of epidemiology said that three-quarters of all adverse reactions to food reported to the FDA involved aspartame. That same year, 60 Minutes said, “aspartame’s approval was one of the most contested in FDA history.” For more details on how aspartame was approved by the FDA check out Jon Barron’s 2004 newsletter on the subject.

It’s interesting that the story got pulled one day before yet another, unrelated story broke about the pharmaceutical company Medtronic, which apparently took an active role in manipulating data in clinical studies of its product, In Fuse.4 Baxter, Anni. “Senate Committee Report Highly Critical of Medtronic.” 25 October 2012. MPR News. 25 October 2012. < http://minnesota.publicradio.org/display/web/2012/10/25/health/senate-report-critical-medtronic/> Allegedly, Medtronic paid huge fees amounting to tens of millions of dollars to researchers who wrote studies supporting the drug.

In other words, all is not necessarily what it appears to be when it comes to scientific studies, as we’ve said so often in the past. That established, it is certainly possible and perhaps even likely that the Harvard study really wasn’t that strong and maybe taking it to press was premature. But it’s also true that the diet soda industry is gargantuan, with one out of every five people in the US guzzling the stuff with some regularity. Americans drink 92 billion cans of diet soda annually. Coca Cola Company reportedly sold 926 million cases of their diet beverage in 2010.  With Coca Cola Company reporting sales topping $1.9 billion in the first quarter of 2011 (Diet Pepsi isn’t far behind), bad news about diet soda would be bad news for business.5 Spain, William. “Coca Cola profit jumps, but shares slip.” 26 April 2011. The Wall Street Journal. 25 October 2012. < http://articles.marketwatch.com/2011-04-26/industries/30803617_1_coca-cola-muhtar-kent-worldwide-volume>

Again, we’re not saying that there’s necessarily anything shady going on in pulling the aspartame study from the clutches of the press (and besides there’s so much negative press out there already about artificial sweeteners and diet sodas that it probably doesn’t even matter), but it does seem odd that it didn’t simply get published with some provisos attached, as happens with so many other studies. In any event, it’s all moot if you care about your health because there are plenty of other studies pointing out the multiple risks of drinking diet sodas, not only because of the aspartame, but also because of the coloring agent.6 Chan, Amanda. “Diet Soda a Day Linked to Higher Risk of Stroke, Heart Attack.” 1 February 2012. Huffington Post.25 October 2012. < http://www.huffingtonpost.com/2012/02/01/diet-soda-stroke-heart-attack_n_1247195.html> Diet soda has been tied to higher risk for heart attacks, strokes, cancers, osteoporosis, tooth decay, and nervous system disorders. Oh, and don’t take the CDC study about diet sodas and weight loss too seriously. There are plenty of studies that contradict it and indicate that consuming diet sodas  packs weight on. That said, there are many other things you can drink that actually benefit your health, starting with purified water.