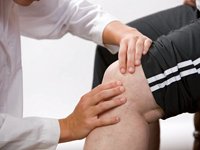 Soda is not what anyone would call a healthy drink.  It has been linked with asthma and other respiratory problems1 Kearney, Christine. “Respiratory Problems Linked To Soda Intake.” Medical News Today. 8 February 2012. Accessed 23 November 2012. http://www.medicalnewstoday.com/articles/241372.php and diabetes,2 Naish, John. “Having seen the evidence, I don’t touch fizzy drinks any more.  Frankly they’re evil, says leading biologist.” Daily Mail. 30 July 2012. Accessed 23 November 2012. http://www.dailymail.co.uk/health/article-2181290/Having-seen-evidence-I-dont-touch-fizzy-drinks-Frankly-theyre-evil.html especially in those who drink it in large quantities.   Now, there is one more reason to consider cutting back on soda consumption.  A new study has determined that sugary soft drinks may contribute to a worsening of knee osteoarthritis in men.3 Laino, Charlene. “Soda May Worsen Knee Osteoarthritis in Men.” WebMD. 14 November 2012. Accessed 22 November 2012. http://www.webmd.com/osteoarthritis/news/20121108/soda-may-worsen-knee-osteoarthritis-in-men

As the experiment began, the volunteers answered surveys regarding their dietary habits, which included information on the number of soft drinks containing sugar that they typically drink every week.  Annually, over the next four years, the scientists would assess each subject’s knees to establish how much cartilage had been lost since the last visit.  They also determined each patient’s body mass index (BMI), since a major risk factor for developing osteoarthritis is being overweight.  However, even when controlling for variables such as excessive weight, those men who admitted to regularly consuming five or more sodas per week experienced twice the amount of cartilage loss as the men who abstained from drinking sugary soft drinks.

The BMI readings were used to separate the male participants into obese and non-obese categories.  The influence of soda drinking on knee osteoarthritis only pertained to the men in the non-obese group.  That would appear to mean that soda consumption is a factor in the knee damage taking place that is completely separate from the progression of the condition that is brought on by extra weight placing pressure on the joints.

For some reason, these results only held true for the men involved in the study and not the women.  It’s possible that certain dietary factors affect one gender more than the other due to the slightly differing mechanics of the male and female bodies or because of some hormonal impact.  However, that will not be known unless further studies are conducted.

Additionally, the research did not look at the consumption of diet sodas by volunteers, so it is not clear whether these too may increase cartilage damage in men with knee osteoporosis.  It’s not unlikely that diet sodas would have a similar effect since they contain many of the same chemicals, including phosphoric acid, that have been shown to prohibit absorption of calcium and therefore may harm the bones.4 “Soft-Drinks And Bones.” Tufts University. 25 September 2003. Accessed 23 November 2012. http://enews.tufts.edu/stories/802/2003/09/25/Tucker They are also highly acid forming in the body, which tends to accelerate the degradation of body tissue.

This could potentially cause serious problems if these findings are accurate.  Osteoarthritis is a common health issue that is estimated to affect 27 million people in the United States alone.5 “Arthritis-Related Statistics.” Centers for Disease Control and Prevention. 1 August 2011. Accessed 23 November 2012. http://www.cdc.gov/arthritis/data_statistics/arthritis_related_stats.htm With the combination of the overall aging of the population and the ever-growing numbers of overweight and obese individuals, osteoarthritis of the weight-bearing joints including the knees may well be on the upswing.  And let’s face it, five soft drinks in one week is not that great of a quantity for lots of men.  Think about how many people you know who drink that much in a single day.  Not to mention those who order soft drinks in huge glasses at restaurants — along with an endless supply of free refills.

The bottom line is that soda–with or without sugar–has no nutritional value whatsoever and a possible association with several health issues.  If you truly love the taste of it, make it a very occasional treat.  And if you suffer from knee osteoarthritis, start by doing everything you can to lose weight if you are carrying excess pounds.  Acupuncture may be beneficial for many sufferers as well.  A study that took place earlier this year at Plymouth University in the United Kingdome found that acupuncture treatments were successful in relieving the symptoms of knee osteoarthritis such as pain and stiffness in the knee joint.6 White, Adrian, et al. “Group acupuncture for knee pain: evaluation of a cost-saving initiative in the health service.” Acupuncture in Medicine. 20 August 2012. Accessed 23 November 2012. http://aim.bmj.com/content/early/2012/06/22/acupmed-2012-010151 And you absolutely might want to consider a supplement based on avocado soy unsaponifiables, as it can not only help protect the cartilage in your joints — it can even help rebuild it. That is certainly worth a try, rather than relying on pain and anti-inflammatory medications that come with their own set of problems.