Walk to Work for Mental Wellness 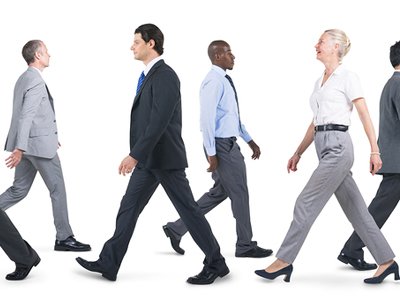 Unless you live in a major city, getting into your car and driving is usually the quickest and easiest method of transportation to get to work. However, it also keeps you sedentary, which means you are barely burning any calories as you just sit and drive, nor are you improving your cardiovascular function. In addition, driving to work is terrible for your carbon footprint, especially if you don’t carpool, as you are burning fuel and adding pollution to the atmosphere. Walking or riding a bicycle to work will eliminate these problems, and new research has found another benefit to these modes of commuting as well: reaching your destination under your own physical locomotion has been linked to a boost in psychological wellbeing.

The study, which was conducted at Norwich Medical School at the University of East Anglia in the United Kingdom, found that leaving your car at home and making your way to work on foot or by bike may have a very positive effect on your mental health as well.1 Dallas, Mary Elizabeth. “Walking, biking to work may boost mental health.” CBS News. 15 September 2014. Accessed 22 September 2014. http://www.cbsnews.com/news/walking-biking-to-work-may-boost-mental-health The subjects were close to 18,000 British adults ranging in age from 18 to 65 who regularly commuted to work. For a period of 18 years, these participants answered questions pertaining to their emotional state including feeling unhappy or worthless, whether they were getting a good night’s sleep, and if they considered themselves to be able to adequately deal with problems in their lives.

After sorting through all of the data, the scientists determined that those regular commuters who decided to abandon driving to work in favor of either walking or riding a bike had lower stress levels and improved concentration. That makes perfect sense, as exercise releases endorphins that put us in a better mood and provide stress relief. In fact, a 2010 study at Southern Methodist University in Dallas, Texas found that exercise can be a more powerful treatment for depression than pharmaceutical medications.2 “Study: Exercise should be prescribed more often for depression, anxiety.” Southern Methodist University. 1 April 2010. Accessed 23 September 2014. http://blog.smu.edu/research/2010/04/01/study-exercise-should-be-prescribed-more-often-for-depression-anxiety And getting in this sort of workout before starting your day on the job should see these benefits continue throughout at least the first portion of the workday.

If you live too far from the office to possibly consider walking or riding a bike to work, there’s hope for you too. The researchers discovered that even those people who took mass transit options to work reaped some mental health benefits as well. While there is a perception of commuters having to deal with major crowding or delays on buses or trains, the reality appears to be that it is still more relaxing than driving. Without having to pay constant attention to their surroundings and avoid all the bad drivers on the road, the subjects faced less stress and used the time talking to others or reading or listening to their iPods. Plus, there is the additional bonus of at least a little exercise usually involved with taking public transportation. A walk from home to the train or bus stop and another to the workplace may not get you any long-distance medals, but at least it’s getting you moving.

These results held up even when the scientists controlled for a number of potential factors that might have a negative psychological impact. They looked at issues including socioeconomic level, family problems, changing residences, and starting a new job. But despite the stress that can be brought on by these influences, the commuters still had a consistently better outlook on life when they were not driving to work. In addition, the length of time spent commuting each day was found to have an effect on a person’s well being, but in different ways depending on the mode of transportation. Longer rides to work in the car were associated with a downturn in satisfaction. Conversely, a longer bike ride or walk to work translated to a boost in mental health.

Therefore, until such time as Google begins selling its self-driving car, it might very well be worth trying to walk or ride a bike to work, at least on good-weather days. For the many people who say they can’t find any time to exercise, that would certainly kill two birds with one stone. Just make sure if you are biking to always wear a helmet. If the distance is too great to be walkable or bikeable, look into public transportation options or at least find parking farther away to try to incorporate some measure of exercise into your routine. And don’t forget to take the stairs as much as possible while at work. These changes can help you be physically and mentally healthier, and even give you some advantages on the job.

Gallery image with caption: Make the Most of Bike Month

Gallery image with caption: Too Much TV May Harm Your Fertility