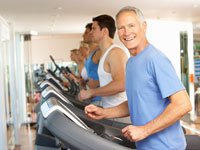 Imagine a day in the future when your prescription won’t read “Take two Lipitor and a Diovan, with food.” Instead, you’ll leave the doctor’s office with a note to “Go for a jog and then report to the gym.”

There’s plenty of scientific evidence that a prescription for a fitness and exercise routine often makes a lot more sense than one for a drug–as long as you’re not a pharmaceutical company and you’re willing to work up a sweat. This wisdom was once again confirmed by a recent, large-scale study that found that exercise equals, and in some cases outperforms medication in preventing death from most forms of cardiovascular disease.1 Nasi, Huseyin. “Comparative effectiveness of exercise and drug interventions on mortality outcomes: metaepidemiological study.” 1 October 2013. BMJ. 30 December 2013. http://www.bmj.com/content/347/bmj.f5577 Other studies show it isn’t just heart disease that responds better to exercise than to drugs: it’s almost any physical or mental ailment.

The cardiovascular study, published in the British Medical Journal and led by scientists from the Harvard Medical School, the London School of Economics, and the Stanford University School of Medicine, examined 305 randomized controlled trials that included 339,274 participants.2 “Working out can be ‘as good as’ taking medicine.” 2 October 2013. The Daily Briefing. http://www.advisory.com/Daily-Briefing/2013/10/02/Exercise-is-as-good-as-a-pill   On examination, the researchers discovered that exercise is equally as effective as medication in preventing diabetes and heart disease deaths and for treating ongoing coronary heart disease. Exercise programs, however, were significantly more effective than prescribed medicines in preventing death from stroke. The one exception found was that diuretics worked better than exercise in preventing death after heart failure.

The medications considered in the study included statins, beta blockers, ACE inhibitors, anticoagulants, angiotensin receptor blockers, antiplatelets, diuretics, and a host of prediabetes medications. These are the big sellers in the pharmaceutical world, and in spite of evidence that there’s a cheaper, safer palliative out there, they will most likely continue to rake in billions for their manufacturers. As we have written numerous times in the past, the side effects of virtually all of these medicines are confounding. For instance, statins can cause a host problems ranging from muscle loss to mental confusion, liver damage, and the onset of type II diabetes. Beta blockers have been tied to impotence, exhaustion, and ironically, heart problems.  Each medication on the list carries a similar burden of dangers.

Exercise, on the other hand, carries no side effects, unless you want to argue that you risk slipping on the ice while running, or pulling a muscle at the gym doing Zumba. Virtually everything associated with fitness and exercise is positive. It can help you lose weight. It can help you feel happier. As we’ve written before, studies show that exercise actually does a better job of lifting depression than antidepressant drugs do. It can help your kids do better in school, prevent or delay cognitive decline, control anxiety, prevent hip fractures, improve memory and mood, prevent a long list of diseases, and help you live longer. 3 Hellmich, Nancy. 29 December 2013. The News Star. 30 December 2013. http://www.thenewsstar.com/article/20131229/NEWS01/312290062/Docs-prescribe-best-preventative-drug-exercise Plus, two new studies show it can reduce the pain associated with breast cancer treatment and prevent early death from heart failure.

“Indeed, an increasing number of experts recommend prescribing an “exercise pill” as a preventive strategy to reduce morbidity and mortality,” says the BMJ report. It’s a cute sentiment, but the sad fact is that doctors almost do need to package exercise in a pill in order to get the public to comply, based on how few people get enough exercise. Right now, the US government suggests that adults should get a minimum of 2.5 hours of moderate aerobic exercise weekly (like walking fast) or an hour and 15 minutes of vigorous aerobic activity, such as running. Polls show that only 20 percent of the population meets this modest goal. Less than five percent of the population gets a daily dose of 30-minutes of exercise, and that includes exercise done in 10-minute increments.

“Exercise is the best preventive drug we have, and everybody needs to take that medicine,” says Jordan Metzi, author of The Exercise Cure. On the cusp of this new year, it seems high time to take that proclamation seriously and don those running shoes you got for Christmas. By the way, if you’re exercise-resistant, you might consider a workout regimen we described last year that requires only 15 minutes a week. The approach calls for short, intense micro-intervals of exercise–six 30-second bursts followed by short rest periods–done every other day for two weeks. Research found that the 15-minute-a-week plan conferred as much benefit, at least in terms of insulin function, as the 75-minute plan.

For more on exercise, check out Jon Barron’s article: The Need for Exercise.