How Much Fitness & Exercise Do You Need? | Natural Health Blog

How Much Exercise Do You REALLY Need? 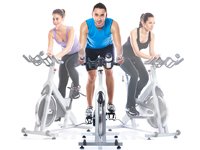 In the developed world, at least some of us spend more time shopping for athletic clothing than actually participating in anything athletic. In spite of media blitzes making it clear that we need to get moving in order to stay healthy and trim, over 80 percent of the US population doesn’t do even the minimum amount of exercise recommended by the Health and Human Services Department. Those recommendations call for 75 minutes of vigorous exercise each week, or failing that, 150 minutes of light exercise, like walking. For perspective, just imagine how much exercise our ancestors got heading out on an all day hunt, or working in the fields from dawn to dusk…doing everything by hand. Suddenly, 75 minutes a week sounds almost sad.

In any case, this reality presents something of a conundrum for those who care about society’s general well-being. Clearly, most people have been having a hard time finding 75-150 minutes each week to dedicate to fitness and exercise, which does seem sad when you consider that there are 10,800 minutes in a week. If you sleep eight hours a night, that still leaves 7,440 available waking minutes.  Since most of us can’t seem to carve 75 minutes out of those 7,440, researchers have been trying to find a shortcut.

Sure enough, a few years ago, the scientists did come up with what seemed to be a solution. As we reported at the time, researchers at Heriot-Watt University in Edinburgh, Scotland found that just three minutes of high-intensity exercise–in the form of six 30-second bursts followed by short rest periods–done every other day for two weeks, also known as interval training, provides health benefits equivalent to running for an hour a day. Three minutes versus one hour? That almost sounds like the equivalent of the invention of the ox drawn plow for our agrarian ancestors versus hand plowing.

Specifically, Timmon’s subjects worked out vigorously on static bikes for 30-second intervals followed by a few minutes of rest. Then they did another 30-second interval and rested again, repeating the routine four more times. The whole regimen took 15 minutes a week, and in return the volunteers reaped a 23 percent improvement in insulin function, meaning they reduced their risk of diabetes and related cardiovascular complications.1 Hobson, Catherine. “Can You Really Get a Great Workout in Three Minutes?” 28 January 2009. US New & World Report. 27 June 2013. http://health.usnews.com/health-news/blogs/on-fitness/2009/01/28/can-you-really-get-a-great-workout-in-3-minutes

A similar study at McMaster University in Ontario a few years prior compared the effects of four 30-second all-out high-intensity intervals on a bike, versus 90 minutes of moderate exertion on the bike.2 Gibala, MJ et al. “Short-term sprint interval versus traditional endurance training: similar initial adaptations in human skeletal muscle and exercise performance.” 15 September 2006. Journal of Physiology.  27 June 2013. http://www.ncbi.nlm.nih.gov/pubmed/16825308 Incredibly, the benefits were similar in terms of increasing exercise capacity and muscle tissue.  But both the McMaster study and the one in Scotland used fit subjects in their early 20’s. The McMaster’s researchers realized that not everyone can handle such vigorous, all-out effort, and so they went back to the lab and in 2010, published research concluding that older, overweight, or infirm people who can’t handle the intensity can substitute 10 moderately-vigorous one-minute sessions on the bike three times a week.3 “High-Intensity Interval Training Is Time-Efficient and Effective, Study Suggests” 12 March 2010. Science Daily. 27 June 2013. http://www.sciencedaily.com/releases/2010/03/100311123639.htm The “reduced intensity” workout takes 20 minutes, given that each peddling session gets followed by a one-minute rest. Over the course of a week, that adds up to only an hour. That may not be quite as attractive as the 15-minute a week option, but again, not everyone can handle the extreme intensity of all-out intervals.

The latest study, just in from the Norwegian University of Science and Technology, asked overweight volunteers to exercise at 90-percent capacity on a treadmill for just four-minutes three times a week. In other words, the participants exercised a total of 12 minutes a week, over a ten-week period. At 90-percent capacity, they were working too hard to talk in complete sentences while exercising, although they could manage to spit out single words. A control group did the same routine, except that group was instructed to repeat the four-minute intense workout four consecutive times, with a three-minute rest between sessions–for a total of 84 minutes a week. At the end of the 10 weeks, all the participants had increased their maximum oxygen uptake by at least 10 percent. The 12-minute group reaped the same benefit as the 84-minute group.

The evidence seems to indicate that short bursts of intense exercise can improve at least some aspects of fitness and health just as effectively as far longer sessions of more moderate exercise. But a question remains as to how the interval approach affects overall and natural heart health over the long run. Whether a few minutes of interval training a few times a week can ward off cardiovascular issues and add years to life, as traditional exercise can, remains to be seen. Remember, these studies only evaluated numbers that “potentially” translate into health and longer life–not health and longevity itself. Nevertheless, so far, it does appear that the short bursts of effort can reduce blood pressure and blood sugar.  That said, it should also be remembered that the studies to date have been very short term, which leaves a lot of questions unanswered. For example, at least one expert points out that if you exercise for 45 minutes you’ll be a lot hungrier than if you exercise for three or four minutes, so you’ll probably eat less with interval training, meaning you might actually lose more doing the shorter exercise cycles.

But all this may be beside the point if we hearken back to those 7440 available minutes in a week. On the one hand, it seems a marvelous breakthrough to discover that you may only need to dedicate 15 of those minutes to exercise, but on the other hand, something clearly is wrong with this picture.  Are we so divorced from our bodies that we can barely find 15 minutes a week to move? Or perhaps it’s a question of will. Perhaps sitting down in front of the TV with a bowl of ice cream for the evening, after a long day sitting at a desk, “seems” easier and more satisfying.

What can be done? Maybe corporations need to step up with programs to help, since most people spend the majority of their available hours at work. Back a few decades ago, until budget cuts forced them to abandon them, schools offered students gym classes five days a week. Why can’t companies and organizations do the same thing for adults, plus throw in some stress reduction besides? And when all else fails, just remember that intense exercise actually releases more feel good endorphins than a bowl of chocolate ice cream.