Music Helps Surgeons and Patients, but Not Driving Teens 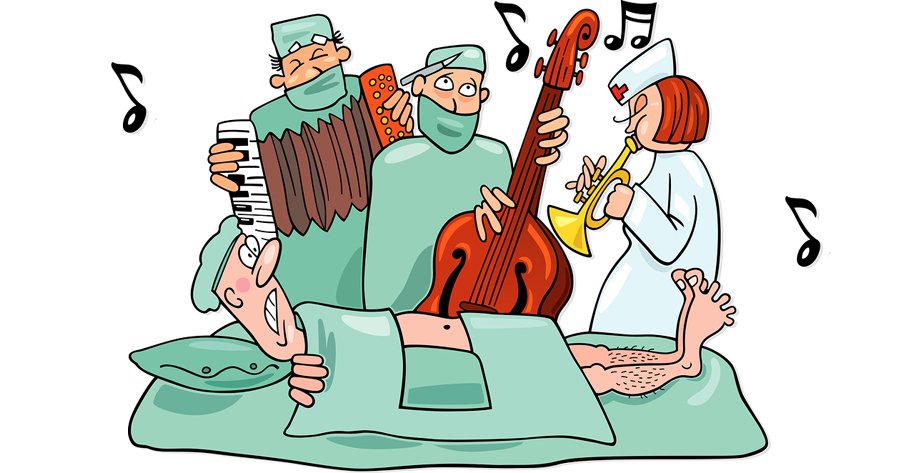 We’ve written before about how music can enhance athletic performance, improve balance, strengthen the immune system, and even make kids friendlier. Given all the things that listening to music already has been shown to improve, it’s no surprise to learn of a new study revealing yet more ways that music makes things better.

The study found that surgeons who listen to their favorite music while operating on patients do the job faster and with more accuracy.1 “When surgeons listen to their preferred music, their stitches are better and faster.”30 July 2015.  Science Daily. 30 July 2015. http://www.sciencedaily.com/releases/2015/07/150730162840.htm Incidentally, the “patients” in the study were pigs feet from a local market. Yes, seriously. The research tracked performance of 15 plastic surgery residents who were asked to suture up an incision in the pigs feet, and then to repeat the same procedure the following day. They performed one of those operations while listening to music. The other time, they worked in silence.

Okay, granted, sewing pig’s feet isn’t as high stress a challenge as suturing up a beating heart, but apparently the skin on pig’s feet closely approximates human skin and is often used by interns for practicing technique. Study director Dr. Shelby Lies of the University of Texas in Galveston explains how the researchers ensured valid results: “We recognized that our subjects could potentially improve on the second repair simply as the result of repetition. This effect was reduced by randomly assigning the residents to music first or no music first groups.”

A panel of plastic surgeons who were unaware of the study parameters judged the results. The improvement in speed ranged from seven to 10 percent when the doctors had their favorite tunes going, according to an article noting the effect in the professional journal Aesthetic Surgery Journal. The surgeons also noted a marked improvement in the quality of the stitches.

This certainly wasn’t the first study examining how music in the operating room affects both patients and doctors. A 2009 study out of Massachusetts General Hospital, for instance, found that surgeons who listened to Mozart had improved accuracy compared to those who worked in silence or who had two different types of music playing at the same time.2 “Can background music improve surgical performance and patient recovery?” Musicworks. 30 July 2015. http://www.musicworksforyou.com/news-and-charts/news/195-can-background-music-improve-surgical-performance-and-patient-recovery Performance time didn’t improve with Mozart, though–just accuracy. Maybe the researchers needed to play something a bit more “Allegro.”  In fact, faster surgery does make a big difference, according to Dr. Lies.

“Longer duration under general anesthesia is also linked with increased risk of adverse events for the patient,” he said, also noting that the longer the surgery, the more expensive it is.3 Smith-Strickland, Kiona. “Music in the Operating Room Could Improve Surgery.” 2 August 2015. Gizmodo. 12 August 2015. http://gizmodo.com/music-in-the-operating-room-could-improve-surgery-1721626813

The good news is that, according to the at least one surgeon, Dr. Alan I. Benvenisty of New York’s St. Luke’s Roosevelt Hospital Center, “75 to 80 percent of doctors listen to some kind of music in the operating room, whether the nurses are putting it on, or the O.R. techs are putting it on, or they are putting it on themselves. Usually the radio is on or someone’s brought their iPod.”4 Wise, Brian. “Surgeons Perform Better With Music On, Study Finds.” 4 August 2015. WXQR. 12 August 2015. http://www.wqxr.org/#!/story/surgeons-perform-music-study/

In fact, healers have used music as an adjunct to performing medical procedures since Ancient Greece, when Apollo was considered the god of both music and medicine. A report in the British Medical Journal confirms that musical surgeries are the rule, with classical music being the most common genre, at least in Britain.5 Gregoire, Carolyn. “Why Surgeons Listen to Music in the Operating Room-And How it Could Help You.” 12 December 2014. Huffington Post. 12 August 2015. http://www.huffingtonpost.com/2014/12/11/music-surgery_n_6310842.html That article says that music also improves cooperation among physicians and calms them down.

The fact is that music helps not just the doctors, but also patients about to undergo surgery. In fact, previous studies have found that music reduces the perception of pain and relaxes patients even better than pharmaceuticals prior to anesthesia.

Music, it seems then, is great medicine to the point where one might wonder if there’s anything music does not make better. The answer is yes–music can be disastrous for teens behind the wheel. A recent study by the AAA Foundation for Traffic Safety examined 1700 videos taken from in-car recorders, studying the six seconds prior to a moderate to severe crash.6 Green, Michael. “Distraction and Teen Crashes: Even Worse Than we Thought.” 25 March 2015. AAA. 12 August 2015. http://newsroom.aaa.com/2015/03/distraction-teen-crashes-even-worse-thought/ All the drivers were teens. Before the study, analysts assumed that distractions in the car from sources such as loud music, conversation with other passengers, or cell phone use caused about 14 percent of teen crashes, with drugs, alcohol, poor judgement and so on causing the majority of mishaps.

It turned out, though, that in-car distraction caused four times that number of accidents, or 58 percent of all crashes, including 89 percent of all accidents where the car went off the road.  Singing or moving to music caused eight percent of all of those accidents, while interacting with other passengers caused 15 percent and playing with cell phones 12 percent.

Smart parents might consider removing the stereo from the kid’s car (as if), while smart patients might want to gift their surgeon with some Mozart.