I Want My Baby Bach Riffs 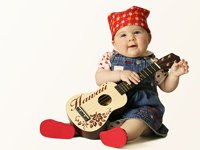 It’s common for musicians to hail from musical families. The clan of Johann Sebastian Bach, for instance, was full of musicians, with five of his own children considered important composers and 45 other relatives achieving some mark in the musical world.1 (The same might be true of baseball. Think Felipe, Matty, Jesus, and Moises Alou.) Certainly, though, it seems that musical ability must be inherited, and in fact, studies indicate that heredity does play a key role in an individual’s musicality.2 But even if you can’t sing “Happy Birthday” without careening so far out of key that the crowd turns to stare, you can give your child a shot at developing musical ability, plus boost his social and communication skills at the same time. You just have to start early enough.

A new study out of McMaster University in Canada found that infants between the ages of six months and a year involved in music activities for children twice a week, along with their parents, developed enhanced musical acuity plus superior social and communication skills.3 It’s difficult to imagine tots in diapers taking music lessons, but apparently, two teachers worked with the parents and their babies to help them play percussion instruments, move to music, and learn lullabies and nursery rhymes.4 The parents also received CDs so they could continue working with the babies daily at home. The approach used in the classes was the well-known Suzuki method.

In a control group, the babies went about normal tot activities — playing with balls, blocks, or books — while loops of music from the Baby Einstein recording series played in the background. The researchers found that babies who merely listened to the music didn’t gain the same advantages as those who actively participated in making music. When the researchers tested the babies after six months in the program, they found, among other things, that those who participated in the interactive classes with their parents had greater sensitivity to pitch.

“Specifically, they preferred to listen to a version of a piano piece that stayed in key, versus a version that included out-of-key notes,” says study director Dr. Laurel Trainor. “Infants who participated in the passive listening classes did not show the same preferences. Even their brains responded to music differently. Infants from the interactive music classes showed larger and/or earlier brain responses to musical tones.”

Even more significant, perhaps, were the social and psychological gains the musical babies reaped. The infants in the enhanced musical classes smiled more, waved goodbye more readily, pointed at objects out of reach, and responded to objects in the distance more than their peers did. Plus, they coped with change and frustration better than their peers.

The researchers note that the edge gained by the infants in the active music class may have as much to do with their heightened levels of parental interaction as with partaking in music making.  On the other hand, they write, “The infant brain might be particularly plastic with respect to musical experience.” In other words, music might provide a shortcut to enhancing children social skills. And in fact, a number of studies have already shown that learning to play music positively impacts the human brain.5

What if you missed the window of opportunity when your tots were still in diapers? Is it too late for them to benefit from music activities for children? Hardly. A few years ago, Jon Barron reported on a study that found that three years of studying musical instruments led kids to “trounce their peers in tests of auditory discrimination and finger dexterity, [and also to outperform] them in both verbal ability and non-verbal reasoning, as measured by IQ tests. Even more, the longer and more consistently the kids had been playing their instruments, the higher their scores.”

Plenty of other research reveals myriad advantages — Jimi Hendrix aside — gained by those who play music. A 2007 study found that adults who had completed at least three years of musical training before the age of 12 had far more linguistic capacity when compared to non-musicians. Earlier research revealed that children who had musical training far surpassed their peers in verbal memory.6 Again, the more years of musical study the children had, the better their verbal memory seemed to be.  In fact, various studies have found that musicians actually have a different brain structure than non-musicians, with more gray matter in their auditory cortex.

So back to the Bachs. Perhaps, in addition to inheriting musical genius, the entire clan benefited from being involved with music from birth, having instruments lying around to play with and tunes to hum along to. Likewise, maybe if you immerse your children in making music from the get go, they’ll develop latent musical abilities that otherwise would have remained hidden — plus build their overall brain power.

The bottom line is that banging on the drum (or the pots and pans) along with your toddler can’t hurt. In fact, if you enjoy daily sessions of singing and playing together, not only will your baby benefit, who knows: So might you. Nobody tested the parents to see if they also made gains from the musical moments they shared with their kids. In any event, if your child gains an increased ability to deal with stress, change, and social pressures from playing music, you might avoid the need for ADHD medications and antidepressants by the time your kid gets ready for grade school, not to mention anti-stress medication for yourself.

Gallery image with caption: Lower Anxiety in Kids with Dogs