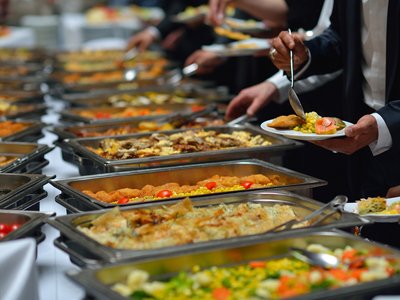 Illumined people across the globe have been quitting smoking and cutting back on fats en masse, but certain other addictions die hard. Take, for instance, our collective love affair with salty foods. Many of us know that we should limit the amount of sodium in our diets, and yet, we continue to eat salt-laden snacks and frequent restaurants that serve meals with sodium content in the stratosphere. New evidence shows that the restaurants we patronize aren’t doing enough to make their meals less salty, either, in spite of having made public pledges to do so.1 Wilson, Jacque. “Restaurants slacking on cutting sodium from meals, report says.” 3 July 2014. CNN Health. 3 July 2014. http://www.cnn.com/2014/07/02/health/sodium-restaurant-meals

A recent study by the Center for Science in the Public Interest compared the sodium content in 136 children’s and adult meals served in America’s 17 most popular chain restaurants in 2009, to those same meals today.2 “Chain Restaurants Decrease Sodium Slightly but Progress is Slow & Uneven, Report Finds.” 2 July 2014. Center for the Study of Science in the Public Interest. 3 July 2013. http://cspinet.org/new/201407021.html The researchers found that while a few of the restaurants examined did slightly decrease sodium in their offerings, several went in the other direction and actually increased the amount of sodium in their meals.

According to the study report, “In 2009, Yum! Brands Inc., the parent company of KFC, Pizza Hut, and Taco Bell, announced that it was working to reduce sodium in its restaurants.” Other restaurants gave themselves a longer timeline: “Olive Garden promised to cut sodium levels by 10% by 2016 and 20% by 2021, and McDonald’s has pledged a 15% reduction by 2015.” Subway made the most dramatic pledge, vowing to cut sodium by 25 percent by 2014, a goal the company has actually exceeded.

On average, the restaurants in this study reduced sodium by 1.5% annually. While that’s certainly better than nothing, it falls far short of being enough. As Michael Jacobson, who heads the Center for Science In The Public Interest (CSPI) says, “At that rate, to get even a 30% reduction, it would take 20 years, which is crazy.”3 Horovitz, Bruce. “Salt still high on restaurant menus.” 1 July 2014. USA Today. 4 July 2014. http://www.usatoday.com/story/money/business/2014/07/01/salt-sodium-restaurants-fast-food-casual-dining/11807709/

Even more crazy is the fact that some of the restaurants actually increased the amount of sodium in their meals, pledge be damned-but more on that in a minute. First, let’s review the context. As we’ve reported before, 90 percent of us consume far too much salt. In 2012, the Centers for Disease Control established a top limit of 2300 mg of salt daily for healthy people, and 1500 mg for individuals at risk of cardiac issues-and that includes 60 percent of the population. In other words, according to the CDC, the majority of us should consume under 1500 mg daily. In fact, most of us consume over 4000 mg daily. Experts say that excess sodium intake contributes to the high incidence of hypertension, stroke, heart attacks, kidney disease, and other health problems, and the CSPI report notes that if US citizens cut intake of sodium by 1200 mg daily, it would save as much as $24 billion in medical costs each year.4 “Stalling On Salt: Restaurant Meals Still Loaded With Sodium.” June 2014. Center For Science In The Public Interest. 4 July 2014. http://cspinet.org/new/pdf/stalling_on_salt.pdf

Now that said, while there is little debate about the 2300 mg figure, there is actually a lot of debate about the 1500 mg figure. For example, a panel of experts convened by the Institute of Medicine in 2013 concluded that “the evidence on direct health outcomes does not support recommendations to lower sodium intake … to or even below 1,500 mg per day.”5 Institute of Medicine. “Sodium Intake in Populations: Assessment of Evidence.” Washington, DC: The National Academies Press, 2013. http://www.nap.edu/catalog.php?record_id=18311 Among other things, the report cited an earlier Italian study that found that people on a low-sodium diet actually did worse [compared to those on medium-sodium diets]. They had more hospital re-admissions and they had a higher mortality rate.6 Paterna S1, Parrinello G, Cannizzaro S, et al. “Medium term effects of different dosage of diuretic, sodium, and fluid administration on neurohormonal and clinical outcome in patients with recently compensated heart failure.” Am J Cardiol. 2009 Jan 1;103(1):93-102. http://www.ncbi.nlm.nih.gov/pubmed/19101237 But let’s be perfectly clear here:  the numbers we’re talking about are way outside the 1,500-2,300 mg debate.

Polls indicate that most of us eat out anywhere from one to four times a week, and most of our sodium comes from restaurant meals or packaged foods.7 Bogue, Katy. “Fast Food or Fast Fat?” http://ucsdnutritionlink.org/articles/archives/fastfood.pdf The CSPI study found that some of the chains in the study offered meals containing more than 5000 mg of sodium. That’s in just one meal; imagine how high the total goes when you add in the rest of the day’s meals.  Worst of all were the higher end, sit-down chain restaurants like Red Lobster, Chili’s, and Olive Garden. While all of these chains did reduce the sodium content in their menu offerings within the past five years, they still serve single meals that contain three days’ worth of sodium.  The sodium reductions they achieved are the equivalent of going from a three-pack-a-day cigarette habit down to a two-pack habit.

For example, back in 2009, each of these chains offered entrees containing over 6000 milligrams, and none of them do that now, but Chili’s still serves Crispy Honey Chipotle Chicken Crispers with Ranch Dressing, which tops out at 4,100 mg of sodium, while Red Lobster’s North Pacific King Crab Legs contain 4,070 mg. Out of the 81 adult meals reviewed, 79 percent still contained more than 1500 milligrams of sodium. Clearly, these reductions still leave diners in the sodium danger zone.

As noted above, some of the restaurants added yet more salt to their offerings.  KFC did decrease sodium in one of the meals tested, but five actually showed significant increases. For instance, their Extra Crispy Chicken plate rang in at 3100 milligrams in 2009; today it contains 3445 mg. Likewise, the bacon ultimate cheeseburger at Jack-in-the-Box contained 3370 mg in 2009, but today it contains 3670 mg. In contrast, Subway exceeded the goals it set, reducing the sodium content in all the meals tested, and lowering sodium in children’s meals by 29%. You can order the 295 mg veggie delight sandwich at Subway, making it one of the lowest sodium offerings in the study.  Burger King also did very well, reducing sodium in children’s meals by an average of 40%.

Just because a restaurant was not included in the study doesn’t mean that it’s sodium safe. For instance, one bowl of hot and sour soup at PF Chang’s contains nearly 8000 mg of sodium. At Joe’s Crab Shack, the Big Hook Plate has 7610 mg. It might be even worse at single location restaurants, because they don’t have to reveal the amount of sodium in their meals. At present, only restaurants with more than 20 locations are required to reveal nutritional content.

The bottom line is that going out to eat is a risky adventure, particularly if you’re already at risk for coronary or kidney issues. You can avoid getting slammed with sodium overload by choosing restaurants carefully, examining the nutritional content if it’s available, going places where they cook to order, avoiding dishes with sauces and gravies, and specifying that you don’t want any extra salt added to your meals. Or, you can stay home and cook for yourself, always a safer bet.

And let’s keep in mind that what we’re talking about here are extraordinarily high levels of refined commercial salt not unrefined sea salt, which is an entirely different animal.