“The proximity of a desirable thing tempts one to overindulgence,” said author Frank Herbert, the guy who wrote Dune. In the case of salt, the proximity seems almost unavoidable, given how much sodium most available food contains, and not surprisingly, we overindulge big time. According to a study of over 7000 individuals just released by the Centers for Disease Control and Prevention (CDC), just about every single American — 90 percent of those over the age of two — consumes considerably too much sodium.1 And for those at-risk for cardiovascular disease – -a segment that includes 60-percent of the population — 99 percent exceed the recommended daily guidelines.

The CDC has established a top daily limit of 2,300 milligrams of dietary sodium as the recommended ceiling for normal, healthy adults. That recommended limit drops to 1500 milligrams daily for the 60 percent of the population at risk — those either over the age of 50 who have diabetes or kidney disease or hypertension, or those who are of African American descent. But the overwhelming majority of us disregard these guidelines, with the average person consuming 3,330 mg daily — at least 1000 milligrams too many.

What’s the problem with the over-the-top salt consumption? Before we answer that question, it’s important to note here, as Jon Barron has so often pointed out, that it isn’t sodium per se that causes problems, but rather, the fact that we eat so much “refined” salt — which has a very different effect on the body than does unrefined, natural sea salt or Himalayan salt, which the body actually needs in reasonable amounts. Unfortunately, almost all of the sodium in the foods we eat comes in the form of refined table salt, which is destructive to the body. And then there’s potassium. Potassium neutralizes the negative effects of sodium. The more potassium you have in your diet, the more sodium you can have without any negative health consequences. Not surprisingly, natural sources of unrefined salt contain potassium; whereas refined salt does not.

Nevertheless, as Thomas Frieden, the director of the CDC, says, “Too much sodium raises blood pressure, which is a major risk factor for heart disease and stroke. These diseases kill more than 800,000 Americans each year and contribute an estimated $273 billion in health care costs. Most Americans, if you just eat the food that’s in front of you, will end up with high blood pressure…Reducing sodium is one of the most effective, lowest cost, safest ways of [preventing] that.”2

Given that nearly one-third of Americans suffer from hypertension, these seem to be important points. The report notes that if the average American cut salt consumption by just a meager 400 mg daily, that could prevent up to 28,000 deaths a year, and save $7 billion in health-care costs.

While it’s no surprise that we consume too much sodium (and again, too much of the wrong type of sodium), some might find it a surprise where the bulk of the sodium comes from. Most of it does not come from wanton behavior with the salt-shaker, but rather, it’s resident in the foods we eat. Ten foods contributed more than 40 percent of the sodium excess, and no, it isn’t chips and salsa and fast-food snacks at the top of list, either. In fact, snack foods came in at the bottom of the “Top-10 list” in position number ten. The number one contributor to sodium intake, it turns out, is bread. In fact, bread and rolls contribute over two times more sodium to our diets than chips and pretzels do. 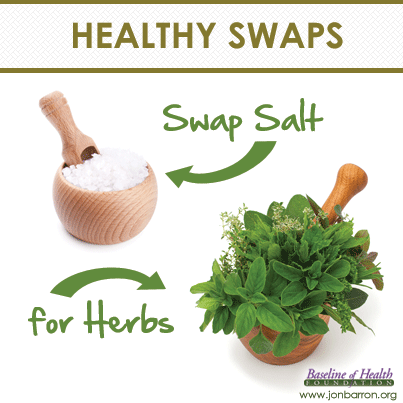 your bread might not taste salty, take a look at the label. The loaf probably has more sodium than you’d think. A typical slice of bread contains about 170 mg.3 If you ate but a slice a day, you’d be fine (depending on the rest of your diet), but you need to multiply that 170 milligrams by two for a sandwich. Then, say you eat a bagel for breakfast. That will add another 500 milligrams, for a whopping total of 800 or so mg of sodium from bread products alone, and that’s before dinner. One roll with dinner adds another 170 mg more, meaning that you will have consumed almost 1000 mg of sodium just in bread products.

The next culprits in the salty mix are cold cuts and cured meats; pizza; poultry; soups; fast-food hamburgers, cheese, spaghetti and other pasta dishes; meatloaf and other meat dishes, and finally, chips and pretzels and other salty snacks. If the high ranking of poultry on the list surprises you, take note of the fact that most chicken sold in supermarkets gets shot up with broth to make it look plump and juicy.4 The problem is that broth is a sodium fiesta, driving up the sodium count in what looks to be plain, unsalted chicken. It’s amazing, isn’t it? Even when you try and do the right thing and eat heart healthy, they get you when you’re not looking!

Other notable findings include the fact that 65 percent of our sodium intake comes from foods bought at the store. Another 25 percent comes from restaurant foods, leaving only 10 percent from salt-shakers or other sources. Children up to the age of 19 get only about eight percent of their sodium from food served at school or day care.

What can you do to curtail your sodium glut? For one thing, check labels. You’ll be astounded at how little attention most food manufacturers actually pay to keeping sodium levels in check — and that goes for the supposedly healthy brands, too. For instance, one cup of Amy’s Organic Chunky Tomato Bisque contains 680 mg. On the other hand, a mere half cup of Campbell’s Condensed Bean with Bacon soup has 860. Wow!

As mentioned above, choosing the right type of salt — namely unrefined sea salt for your cooking and seasoning — makes a big difference. So does limiting your meals out, or at least asking for low-salt options at the restaurants you frequent. Make sure you drink plenty of water to keep flushing excess sodium out of your system. And finally, learn to use other seasonings. Once you cut back on salt, you won’t crave it as much, and foods you once enjoyed will start to taste way too salty.