A Pillar Of Salt 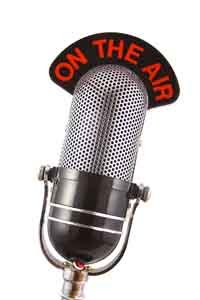 A couple of issues ago, I made a passing comment about the AMA’s recent public statement concerning salt, questioning both the validity of their pronouncement and their qualifications to make such a statement in the first place. What a furor it created!

Since then, I have been interviewed by several newspapers, magazines, and appeared on radio talk shows — all to talk about salt. Who knew it was such a big deal? But since it is, it seems worthwhile to revisit the subject again in more detail.

The primary issue that got lost by the AMA is that not all sources of sodium and salt are the same. As far as the body is concerned, there is no connection between the chemically-cleansed sodium chloride table salt you buy in the supermarket (which is also added to virtually every processed food you buy) and the mineral rich organic unrefined sea salt available in health food stores. One can kill you; the other heals you. In fact, it’s essential for life.

Of course, everyone can agree that just like anything else, salt or sodium should not be consumed in excess. (But then again, that’s true of water and oxygen as well.) Which brings us back to why the AMA came out with a warning at all: Americans are consuming ever higher amounts of sodium, up to 6,000 milligrams a day, instead of the recommended 500 to 2,000 milligrams per day. These high amounts, in a form that is unfriendly to the human body and with no ancillary trace mineral benefits, are what lead to serious health problems. However, this is not necessarily the heart of the debate. The issue is that the AMA is against all forms of salt, a broad-brush condemnation designed more for media sound bites than to truly advance the cause of health.

This is a point echoed in a U.S. Food and Drug Administration article “A Pinch of Controversy Shakes Up Dietary Salt”:

“Now modern technology has made salt readily available and at a price almost anyone can afford. As a result, many of us take salt and its merits for granted. But scientists keep salt in the news by debating its role in a healthful diet. At times, discussion and controversy threaten to obscure salt’s importance and to confuse thoughtful consumers.”

So let’s examine the true nature of salt to gain an understanding of how different types of salt act in our bodies. And let’s also examine some real health issues connected with salt; and finally, let’s talk about how to choose and balance salt in your diet.

Brief History of Humans and Salt 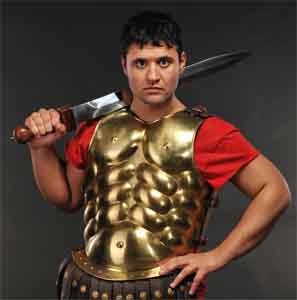 “Worth its weight in gold” is an expression that served well for salt in ancient times. The history of salt is sprinkled with piracy, war, economics, religion, and health. In fact, the next time you contemplate your current salary, consider that the very word “salary” is derived from the Latin word sal because Romans often received their pay in salt. If this is hard to accept, consider that during the Age of Discovery, Africans and European explorers traded an ounce of salt for an ounce of gold — even-steven. Around 110 BC, salt trade was so valued that salt piracy was punishable by death. And Mahatma Gandhi even used salt as major leverage against the British Empire in 1930 when he led thousands of people to the sea to collect their own salt in order to avoid the salt tax imposed by the British.

The Importance of Salt

One point everyone can agree on is that the body needs sodium chloride to function.

If we look at the big picture for a moment, we can recognize that: 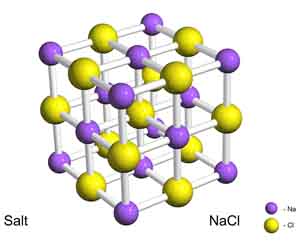 Although the words salt and sodium are often used interchangeably when it comes to nutrition, they are not the same. Salt is sodium chloride (NaCl) and Sodium (Na) is, well, just sodium — a soft metal occurring in isolation only on the periodic table of elements or in a lab.

While it is correct to say that our bodies need sodium, nature has not designed sodium as a solo player but offers it in a complex consisting of natural salt and essential trace minerals, as well as providing it in a variety of foods. Some foods naturally high in sodium/salt are fish, eggs, nuts, prawns, crabs, lobsters and seaweed (Note: all of these natural sources of salt are also natural sources of iodine.) Other naturally occurring sources of sodium (although not quite as high) are celery, carrots, cauliflower, pineapples, jackfruits, and even fresh cow’s milk. And then, of course, there is pure, natural unrefined salt — the salt once worth it’s weight in gold and the focus of this newsletter.

So, with all these great natural sources of sodium, why do we have refined table salt?

A Modern Misconception about Salt

Much like the story of refined flour it seems to come down to aesthetics and economics.

As a point of comparison, here’s the story of white flour.

Salt and flour have suffered the same fate. The process of turning naturally occurring non-white salt into the white-powdery-easily poured table salt involves a distinct trade-off between health and aesthetics/profitability.

And there’s one other financial reason for the dominance of refined salt in the market. Only 7% of salt goes for food; the other 93% goes to industry. Industry requires chemically pure sodium chloride for manufacture of explosives, chlorine gas, soda, fertilizers and plastics. In effect, table salt represents a “cheap” production overrun.

In today’s market, we now have two distinct choices when it comes to salt: unrefined and refined. Unrefined salt (sea salt) is 97.5% sodium chloride (with up to 14% of that being moisture content in some brands) and 2.5% consisting of some 50+ other trace minerals. Refined salt is also 97.5% sodium chloride, but the other 2.5% no longer consists of trace minerals, but rather, chemical additives. 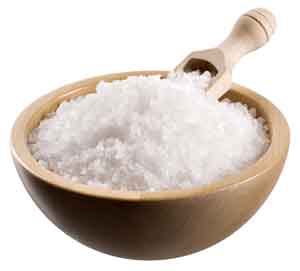 Unrefined salt is at heart sea salt, but can come from two sources: either freshly dried from the sea, as in Celtic Sea Salt, or mined from ancient inland ocean beds as in the Himalayan Salt and RealSalt brands. In either case, the salt is a naturally occurring complex of sodium chloride, major minerals such as calcium and magnesium, and a complete complement of essential trace minerals. This is the form of salt the body recognizes and is designed to use. (Note: a case can be made that mined salt is actually purer than fresh ocean water salt since the inland beds, unlike ocean water, have been sealed off from all pollution — particularly manmade — for millions of years.)

Note: much of the salt labeled “sea salt” is actually refined table salt unless the package is clearly labeled “unrefined.” (This is also true for Kosher salt!)

Refined salt, on the other hand, is a manmade creation of the last century that contains anti-caking chemicals (with very important health consequences as we shall see in a minute) and added iodine. Iodine was added for people who lived inland and at one time did not benefit from natural iodine found in seafood. Truth be told, all refined table salt is actually sea salt at heart, either refined from the sea (brine sourced) or found in salt mines created by ancient seabed deposits known as halite. Refined salt is processed at high temperatures altering the molecular structure of the salt (not good) and removing the beneficial trace minerals. The human body doesn’t like it.

Refined and unrefined salt act and react differently in our bodies.

The problem of excess salt in the diet 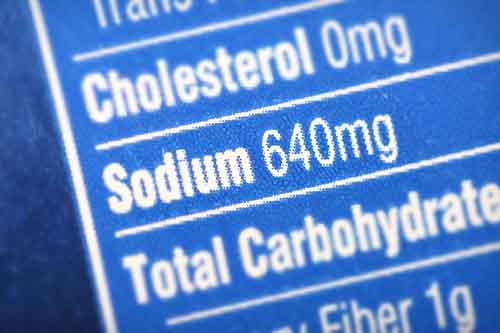 Choosing and balancing salt in your diet.

Unfortunately, you can’t rely on fruits and vegetables any more for your trace minerals: they just don’t contain them. Even organic fruits and vegetables are largely deficient, unless the grower goes to the extra expense of remineralizing the soil. In the end, you have to supplement either with unrefined sea salt or with a trace mineral supplement. Of course, we can all agree on one thing: a healthy diet is a diet in moderation.

The bottom line is unrefined natural sea salt is as essential to life as oxygen, water, vitamins, proteins and essential fats — in conscious moderation of course. The health benefits of unrefined salt must not be overlooked based on an overgeneralization in salt guidelines.

In that light, I recommend:

A study released in July of 2011 and published in the Archives of Internal Medicine strongly reinforces Jon Barron’s position that the major problem with sodium intake is not with the sodium itself, but with the sodium/potassium ration in the body. Balancing out higher intakes of sodium with higher intakes of potassium is likely to negate any negative effects.1Yang Q, Liu T, Kuklina EV, Flanders WD, et al. “Sodium and potassium intake and mortality among US adults: prospective data from the Third National Health and Nutrition Examination Survey.” Arch Intern Med. 2011 Jul 11;171(13):1183-91. <http://www.ncbi.nlm.nih.gov/pubmed/21747015> And in fact, reducing your consumption of sodium too much may have negative health consequences.