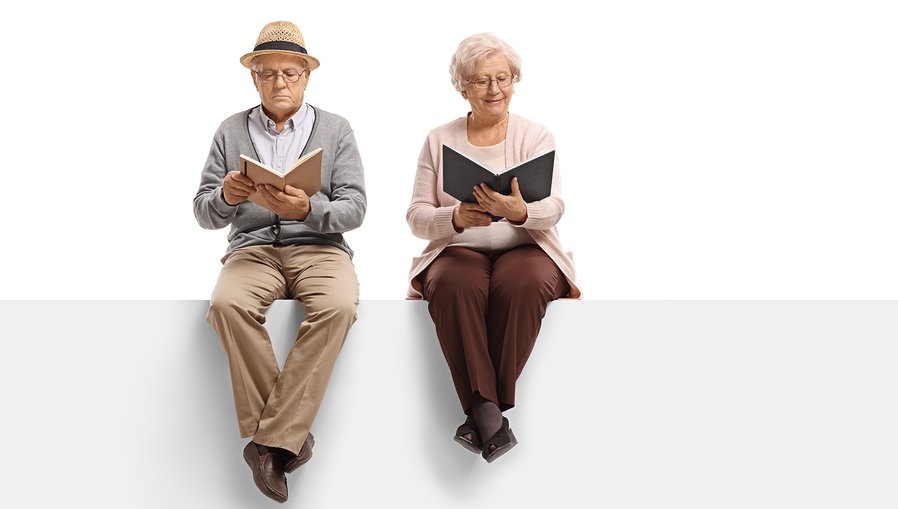 Cognitive decline is a scary concept, and unfortunately, it is something we potentially all have to worry about as we get older. After all, 5.7 million Americans have been diagnosed with dementia according to the Alzheimer’s Association, and there is still much we don’t know about what causes one person to develop these memory problems while another does not. Although, we do know that hospital stays and medications (both pharmaceutical and over-the-counter) play a role. But looking on the bright side, there are many everyday things we can do that have been associated with lowering the risk of dementia. In fact, new research suggests that commonplace activities such as reading might be extremely beneficial.

The study, which was conducted at the Chinese University of Hong Kong in China, found that mentally engaging pursuits including reading and playing games may substantially reduce the risk of developing cognitive decline as a senior citizen.1 Lee, Allen T.C.; et al. “Association of Daily Intellectual Activities With Lower Risk of Incident Dementia Among Older Chinese Adults.” JAMA Psychiatry. 30 May 2018. Accessed 3 June 2018. http://jamanetwork.com/journals/jamapsychiatry/fullarticle/2681169. These results are based on an investigation that involved 15,582 men and women. All the subjects were Hong Kong residents who were 65 or older.

At the beginning of the research, none of the participants were experiencing dementia, but after being tracked for a five-year period, more than 1,300 of them had been diagnosed. Several interviews were conducted throughout the trial during which the volunteers were questioned about what types of intellectual activities they had pursued during the previous month. This broad definition of intellectual activities included a wide range of possibilities like reading books, magazines, and newspapers; playing cards or board games; and betting on horse races. The subjects were also given a cognitive assessment at both the start and end of the investigation.

Once all the data was evaluated, it became clear that there were differences between those who engaged in some sort of brain stimulating activities and those who did not. The participants who said they involved themselves in intellectual activities every day had a substantially lower risk of being diagnosed with dementia than their peers who didn’t engage in these kinds of activities as frequently or at all.

The results remained steady even after the investigators controlled for other factors that can affect dementia risk such as socioeconomic level, exercise habits, and typical diet. The study was not designed to prove cause and effect, so we can’t say for certain that these intellectual activities actually prevented the men and women from developing dementia. In fact, there is even the possibility that the lack of interest in brain-challenging activities on the part of some of the volunteers may be an indicator of early cognitive decline that makes certain tasks such as reading or playing games more challenging and less enjoyable.

But it also needs to be noted that the outcomes of this research are very much in line with several others, all of which showed that an active brain is much more likely to remain healthy and highly functioning through your golden years. So, reading, playing games, and even using your powers of analysis to make a bet can help get those synapses firing and provide protection to your mental faculties.

Don’t just stop there, either. There are tons of ways to give your brain a workout that have all been associated with lowering your risk of dementia. Try your hand at crossword puzzles.2 Jagan A. Pillai, Charles B. Hall, Dennis W. Dickson, et al. “Association of Crossword Puzzle Participation with Memory Decline in Persons Who Develop Dementia.” J Int Neuropsychol Soc. 2011 Nov; 17(6): 10.1017/S1355617711001111. http://www.ncbi.nlm.nih.gov/pmc/articles/PMC3885259/ Learn a new skill such as photography or knitting. Spend time with friends or family to deepen your connections with others and engage your mind socially.

And, of course, don’t forget about living a healthy lifestyle. Good nutrition has been found to help prevent cognitive decline. Some particularly beneficial foods linked to memory and brain function include blueberries and mushrooms. Exercise, too, is a valuable tool in the fight to maintain brain function. A lack of physical activity is one of the biggest risk factors for Alzheimer’s disease, so make sure you work out on a daily basis. And since carnosine has been found in several studies to provide protection from Alzheimer’s disease, a daily supplement using an L-carnosine based formula is a smart idea.