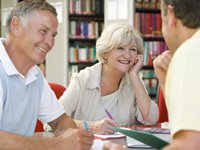 “Get over the idea that only children should spend their time in study.  Be a student so long as you still have something to learn, and this will mean all your life.” –Henry L. Doherty

Have you always wanted to try your hand at some new activity but couldn’t quite find the time?  One of the benefits (or problems) of getting older and retiring, or not having any children living at home, may be many more hours in the week to fill.  Rather than passing time in an empty way like sitting in front of the TV, this may be the ideal moment for you to take up bread baking, playing the guitar, quilting, canasta, or any number of other activities that interest you and give you a new skill at the same time.  And, according to new research, that may also be the best way to keep your memory sharp as you age.

The study, which was conducted at the Center for Vital Longevity at the University of Texas at Dallas, found that learning a new skill is an even more effective method of preventing cognitive decline than keeping your mind active by working on crossword puzzles.1 Castillo, Michelle. “Learning new skill beats puzzles for boosting seniors’ memory.” CBS News. 21 October 2013. Accessed 28 October 2013. http://www.cbsnews.com/8301-204_162-57608558    The subjects were 221 men and women ranging in age from 60 to 90.  They were randomly divided into three groups.

The first group engaged in acquiring a new skill.  These participants were asked to learn either digital photography or quilting, and some of them learned both.  The choices were selected by the researchers because they require active participation and employ both working and long-term memory as well as other cognitive functions.  The second group was asked to busy themselves with familiar activities that they were already accustomed to, including doing crossword puzzles and enjoying classical music.  Both of these pursuits have been shown in previous studies to help give the aging brain a boost.  Finally, the third group spent their time in primarily social settings, gathering with others to partake in some form of entertainment or outing.

All of the volunteers in every group were expected to spend 15 hours each week focusing on their planned activity over the three-month course of the study.  At the conclusion of the experiment, the subjects were tested on their cognitive skills.  Despite the fact that the participants in each group were strongly encouraged to maximize their time performing the tasks at hand and challenging themselves as much as possible, the results showed that those who took on a brand new type of activity that required mastering something never tried before had greater improvements to their memory than the people in either of the other groups.

The researchers speculated that it was due to a combination of factors—including trying something unfamiliar, providing a mental challenge, increasing cognitive stimulation, and being socially involved—that together made an impact on the subjects’ brains.  Each of these factors on its own might provide some benefit, but together they may be actually be able to maximize an older person’s mental potential.

This is an important area for all of us to be concerned with, no matter what our age.  Even if you are young and don’t have a parent or grandparent who may be experiencing the start of minor or more serious memory issues, it will most likely eventually touch you or someone you care about.  According to the latest statistics from the Alzheimer’s Association, approximately 5.2 million people in America have Alzheimer’s disease and one-third of the elderly have Alzheimer’s or another form of dementia by the time they die.2 “Alzheimer’s Facts and Figures.” Alzheimer’s Association. 2013. Accessed 30 October 2013. http://www.alz.org/alzheimers_disease_facts_and_figures.asp

So keep learning new skills well into your golden years to help stave off cognitive decline.  It is not inevitable, especially for those who lead a healthy lifestyle.  Also, it should be noted that a 2012 study at Seoul National University Hospital Healthcare System in Korea found that seniors between the ages of 60 and 70 who were overweight scored lower on brain skills testing than their normal weight counterparts.3 Yoon, Dae Hyun. “The relationship between visceral adiposity and cognitive performance in older adults.” Age and Ageing. 22 March 2012. Accessed 30 October 2013. http://ageing.oxfordjournals.org/content/41/4/456.full   Every piece of the puzzle is important.  Staying mentally, physically, and socially active can all make a big difference in natural anti aging and how well our brains function as time goes on. Read our mental health articles for more information on memory help and brain activites.