There are so many unfortunate things that can happen during a hospital stay, accidental death being chief among them. It’s bad enough that you have some condition that’s sending you to the hospital in the first place, but piled on top of that, if you follow this blog, you know that medical error ranks third as a cause of mortality in the US — which makes any hospital stay doubly frightening. A 2010 report revealed that one out of every seven patients admitted to a hospital in the US suffers harm at the hands of the medical staff. As if that’s not enough to worry about, a new study reveals yet another frightening possibility: that a hospital stay might incur significant cognitive decline — merely because you were in the hospital.1

The study, just published in the journal Neurology, followed 1,870 seniors over the age of 65 for 12 years. Seventy-one percent of the participants had at least one hospitalization during the course of the study, and 97 percent of those hospitalizations were for general medical issues, not involving critical care. Every three years, researchers administered cognitive testing.

The results showed that after just one hospital stay of any length, overall cognitive decline progressed twice as fast as before the hospital stay or compared to those who avoided hospitalization. The rate of decline increased exponentially if the patient was older, more ill, or stayed in the hospital for a longer time. While some cognitive decline is normal in the aging process, hospitalization sped up that decline considerably. Long-term memory suffered most, declining at an astonishing three times the normal rate after a first hospitalization, while complex attention declined at one-and-a-half times the normal rate.

Study director Dr. Robert S. Wilson of Rush University in Chicago says, “What we showed is that once you get out of the hospital your trajectory is downhill. In general, once people start declining they tend not to improve.” Wilson also noted that the rate of decline right after hospitalization equated to aging 10 years.

Holy hospital food, Bulwinkle! The findings are enough to make any sane person opt for getting bled with leeches in favor of checking into the hospital. The deputy director of the National Institute for Aging, Dr. Marie Bernard, comments, “The hospital can be a bad place to go if you’re an older individual. It should be avoided if possible, but that doesn’t mean patients shouldn’t see their health care provider. They need to do that.”2

What Bernard doesn’t say is that most mainstream health care providers are as married to hospitals as they are to their pharmaceutical reps. If you want to avoid the hospital, you need to choose your health care provider carefully, and you might need to shop outside the medical establishment. Also, Wilson’s comment implies that only old people need fear the hospital, and as readers of this blog know, that’s sure not true.

What causes rapid mental decline in the hospital setting? Nobody knows for certain. Study director Dr. Robert S. Wilson of Rush University in Chicago theorizes, “Hospitalization is very common in older age and many older Americans are struggling with their [mental] function. We think that people who have [mental] problems may be more likely to be hospitalized in the first place.” Although I’m sure Dr. Wilson didn’t mean that you have to be nuts to allow yourself to go to a place as dangerous as a hospital, one could interpret his statement that way.

Other reasons the decline might get triggered include the lack of sleep patients experience in a hospital and the fact that hospitals involve lying around with utterly no exercise. Some experts suggest that hospitals need to change their approach to patient care, suggesting that patients need to move and be encouraged to begin exercising even in small ways.

And then there’s the medication factor. The hospitalized patient is like a receptacle into which doctors dump drugs and then more drugs to counteract the effects of the original drugs. At home, patients generally have more control over what they take. In the hospital, that control may be gone, as evidenced by the abundance of medication errors that occur in hospital settings. And then, of course, there’s the elephant in the room: hospitals are not just the place where they give you “abundant” medications; it’s also the place where they give you “new” medications — morning, noon, and night. And frequently, patients are encourage to continue taking those “new” drugs when they leave the hospital. Common prescription drugs introduced in hospitals such as sleep aids, anti-anxiety drugs, antidepressants, allergy drugs, and even cold remedies can cause dementia as a side effect.

As creepy as the cognitive decline statistics are, there’s an equally creepy possibility that hospitalization will trigger a condition known as “Hospital Psychosis.” This is a state in which patients essentially go nuts, having hallucinations and suffering confusion and nightmares, and it’s common enough to have earned the name. The condition is especially common among those on ventilators: 80 percent develop some form of delirium. Also, an earlier study found that patients almost uniformly experienced temporary cognitive decline when leaving the hospital, but in half of all of the 200 cases studied, that decline neutralized in six months.3 In the interim, though, the fuzzy thinking caused patients to get confused about medical instructions on leaving the hospital, creating a dangerous situation.

In other words, getting admitted to the hospital, especially if you’re over the age of 65, seems a nearly surefire way to lose your marbles. The risks are simply off the charts between the chance of medical error affecting you or even killing you and the likely chance that you’ll never be quite as sharp again. If you haven’t been inspired to clean up your act, eat right, exercise, and take your supplements, hopefully this will light a fire under you.

Alzheimer's and DementiaDoctors and Drugs 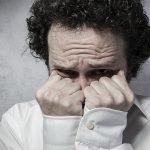