Greener Neighborhoods Are Better for Your Health | Natural Health Blog 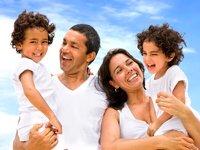 Living in a big city may be full of excitement, offering a myriad of entertainment options any time of the day or night. But when you are ready to settle down for the long haul, you might want to consider a more tranquil environment if you’re a woman interested in your longevity. According to new research, choosing a place to live where you can literally stop and smell the roses every day may be very beneficial to your long-term health.

The study, which was conducted at the Harvard T.H. Chan School of Public Health in Boston, Massachusetts, found that women residing in areas with more trees and other types of vegetation appear to have a lower risk of mortality compared to their peers who live in less green places.1 James, Peter; et al. “Exposure to Greenness and Mortality in a Nationwide Prospective Cohort Study of Women.” Environmental Health Perspectives. 14 April 2016. Accessed 17 April 2016. http://ehp.niehs.nih.gov/15-10363/#tab2 The subjects were 108,630 women living throughout the United States who took part in the Nurses’ Health Study. The scientists analyzed medical records of the volunteers as well as satellite imagery of seasonal greenness in their neighborhoods from 2000 through 2008.

This evaluation showed that those women inhabiting the most green environments had an overall 12 percent lower risk of death than the women whose homes were in the least green surroundings. When the investigators broke the analysis down into specific causes of death, they found two types of conditions that were influenced most. The participants living in lush green places had a 34 percent lower rate of death from a respiratory disease than their counterparts in places with little vegetation. And less significant but still substantial was the rate of cancer-related deaths, which was 13 percent lower in those living in green spaces.

The research was not designed to prove cause and effect, so we can’t say based on these results that the health benefits are definitely attributable to the greenness of one’s living environment. However, there does appear to be a major correlation that certainly deserves further exploration. It also jibes with earlier research including a 2011 study at the University of Heidelberg in Mannheim, Germany that showed those living in urban environments often have more stress and anxiety and are at greater risk of developing a mood or anxiety disorder than those in more rural settings,2 Lederbogen, Florian; et al. “City living and urban upbringing affect neural social stress processing in humans.” Nature. 22 June 2011. Accessed 18 April 2016. http://www.nature.com/nature/journal/v474/n7352/full/nature10190.html which by nature (pun intended) are more green than urban surroundings.

Lower levels of depression is one of the factors that the researchers of the current study speculate may be among the reasons why greener living spaces help us live longer. Other positive attributes they noted about living among greenness include greater opportunities to socialize, higher physical activity levels, and less air pollution. Remember, in addition to the fact that a lower concentration of cars produces less air pollution, green plants actually clean up air pollution simply by being there. They act like air filters. While some of these factors may be more influential than others, it certainly seems safe to say that they can all contribute tremendously to our wellbeing.

Green spaces are more inviting for being outdoors, whether it is to tend to your garden, take a stroll through the neighborhood, or sit outside to admire a sunset. Any of these types of activities can positively promote social interaction, which can curb loneliness and feelings of isolation and prevent depression. Mental health issues like depression have been linked to a lower quality of life and immune system problems. Plus, running, biking, or walking through a beautiful park or wooded area offers more appealing scenery to most of us, and thus more motivation to exercise, than hitting the city streets.

Air pollution too can have a huge impact on our health. A 2016 study at Duke University in Durham, North Carolina showed that living in a big city with a major pollution problem may be very detrimental, contributing to weight gain, insulin resistance, and elevated LDL cholesterol and triglycerides levels.3 Wei, Y.; et al. “Chronic exposure to air pollution particles increases the risk of obesity and metabolic syndrome: findings from a natural experiment in Beijing.” FASEB Journal. 18 February 2016. Accessed 18 April 2016. http://www.ncbi.nlm.nih.gov/pubmed/26891735

So if you’re thinking about making a change to a new location, consider one with a beautiful landscape of trees and flowers. If that’s not on the agenda any time soon, however, don’t worry too much. Living a healthy lifestyle focused around a nutritious diet, daily exercise, and managing your stress levels can go a long way toward maintaining your fitness even if you reside in the most urban of environments.