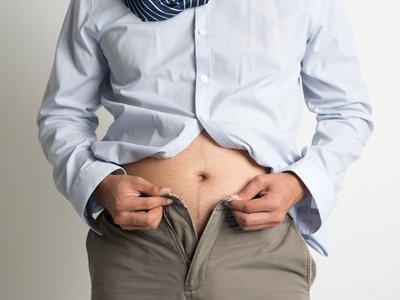 Americans have a reputation for not being among the healthiest of people. Our love of fast food is legendary, many of us are sedentary and develop our couch potato skills at a young age, and we have a high rate of obesity. And just when you might start to think things can’t get much worse, they do. According to new research, our society is still adding excess pounds, and our waistlines have grown even larger in the past few years.

The study, which took place at the Centers for Disease Control and Prevention in Atlanta, Georgia, found that the abdominal girth of adults in the United States increased by more than one inch between 1999 and 2012.1 Doheny, Kathleen. “U.S. Waistlines Keep Growing, With Women Leading the Way.” U.S. News & World Report. 16 September 2014. Accessed 24 September 2014. http://health.usnews.com/health-news/articles/2014/09/16/us-waistlines-keep-growing-with-women-leading-the-way The subjects were close to 33,000 men and women at least 20 years old who took part in the National Health and Nutrition Examination Survey (NHANES). Each of the participants had regular physical exams during the 13-year period that included taking waist measurements.

The data showed that the average waist circumference went from 37.6 inches in 1999 to expand more than an inch to 38.8 inches by 2012. And using waist size as a measuring tool shows that 54 percent of these volunteers were abdominally obese in 2012. That represented a jump from 46 percent in 1999, which was bad enough. Abdominal obesity is defined by a waist measurement of more than 35 inches in a woman and more than 40 inches in a man. It is evidence of not only total body fat, but also visceral or intra-abdominal fat, which is significantly more detrimental to overall health.

Visceral fat means there is more than just a muffin top or love handles present; this type of fat surrounds vital organs in the abdominal cavity and was linked in a 2013 study at Brigham and Women’s Hospital in Boston, Massachusetts to a higher risk of cardiovascular disease and cancer.2 Britton, Kathryn A.; et al. “Body Fat Distribution, Incident Cardiovascular Disease, Cancer, and All-Cause Mortality.” Journal of the American College of Cardiology. September 2013. Accessed 26 September 2014. http://content.onlinejacc.org/article.aspx?articleid=1711096&resultClick=3 What’s more, women fared worse on these waistline findings than did men. Women averaged a whopping 1.5-inch increase in the size of their midsections. The men expanded as well, but at least their gain in waist size remained somewhat smaller, with an average increase of 0.8 of an inch.

For some reason, the scientists were surprised at these results, citing recent evidence that obesity rates have finally begun to level off now that a mind-boggling 69 percent of American adults are overweight and 35 percent are obese. But there appears to be plenty of evidence to the contrary as well, showing that our weight problems are still growing (literally and figuratively). One example is a 2013 Gallup-Healthways poll that found annual obesity rates were still on the rise among U.S. adults in almost every demographic group.3 “U.S. Obesity Rate Climbing in 2013.” Gallup. 1 November 2013. Accessed 26 September 2014. http://www.gallup.com/poll/165671/obesity-rate-climbing-2013.aspx?utm_source=alert&utm_medium=email&utm_campaign=syndication&utm_content=morelink&utm_term=USA%20-%20Weight%20-%20Well-Being%20-%20Well-Being%20Index

So if our weight is still going up, it would stand to reason that our midriffs are enlarging as well. However, the fact that women’s waists appear to be expanding at almost twice the rate of men’s could not be explained by any factor the researchers considered. But accumulations of belly fat are often related to high levels of cortisol that are typically brought on by stress. And aside from the myriad issues throughout the day that stress us out, chronic insufficient sleep can also raise our stress levels. Studies show that the vast majority of us do not consistently get the hours or quality of sleep we need.

So if you would like to continue fitting into your jeans and not watch helplessly as your midsection expands a little more every year, it is worth your while to start making some changes for the better. Because it’s not only your wardrobe on the line, it is your health. Exercising is essential since it can not only help you burn those excess calories, but also relieve stress and promote a better night’s sleep. If you make an effort to eat a little more nutritiously as well, you may just find that you can even tighten that belt an extra notch or two pretty soon. And even if you can’t lose any weight, if you can just keep yourself from adding another inch to your waist over the next couple of years, that would be huge!