There are no magic bullets that will improve the health of the overweight or cause them to shed pounds without a little work on their part.  But new studies out of the University of Chicago suggest that it might be possible to sleep your way there — or at least part way.

The 10 subjects in this study were all between the ages of 35 and 49 and had an average body mass index (BMI) of 27.4.  Anyone with a BMI of 25 or higher is considered overweight.  Each of the participants was restricted to approximately 1,450 calories per day and provided with a customized nutrition plan.  The four-week trial was broken into two two-week blocks.  During one of these periods, the volunteers spent eight and a half hours in bed at the lab, sleeping for an average of 7 hours and 25 minutes.  During the other period — which took place either three months before or after the eight and a half hours a night stint — the participants were only permitted five and a half hours in bed at the lab, so they averaged 5 hours and 14 minutes of sleep.

All of the subjects lost about the same amount of weight, but during the time that they slept for the longer duration, the participants lost more than twice the amount of weight from fat reserves.  When the volunteers didn’t get as much sleep, they lost most of their weight from water or muscle tissue, which will do the body no good in the long run.

Chronic insufficient sleep raises our stress levels. Studies using animal subjects have shown that sleep deprivation can increase the amount of stress hormones circulating through the body.  Designed to help us in ancient fight or flight situations, these hormones such as cortisol, adrenaline, and corticotrophin releasing hormone (CRH) provide immediate energy.  But when the burst of adrenaline and CRH is gone, cortisol sticks around much longer.

Cortisol is a hormone produced in the adrenal gland that functions to maintain blood pressure, but it also influences metabolism, stimulates the production of insulin, and affects blood sugar levels.  In other words, when too much cortisol is circulating, there will be an uptick in appetite for a while.  As a reaction to this flood of insulin and sugar produced by the body, we begin to crave even more of it.  Our elevated levels of cortisol can enhance our desire for sugar and carbohydrate-rich fare, otherwise known as comfort food.

Not only can cortisol cause you to eat more, but it also affects the way your body distributes its fat stores.  Research indicates that stress and high cortisol levels promote weight gain around the midsection rather than in the lower half of the body.  This type of core fat is the most dangerous type of weight gain as it is a major risk factor for heart attacks, strokes, and diabetes.

And even children show signs of abdominal fat storage when they are feeling stressed.  Research at the University College London that is part of the Health and Behaviour in Teenagers Study (HABITS), looked at the height, weight, and waist circumference of 4,065 youths between the ages of 11 and 16.  The researchers found that the waist measurements and body mass indexes were significantly higher in participants categorized as having moderate to high levels of stress as opposed to those in a lower-stress grouping.

So what can you do when you’re stressed out?  Instead of reaching for a king-size candy bar, put that extra energy toward exercising.  It will help lower your insulin and sugar levels and work some of the anxiety out of your body.  In addition, having healthy, high-fiber foods on hand can not only keep you eating better, but this will maintain an even blood sugar level, which lowers cortisol.  Oh, and I almost forgot: get some sleep! 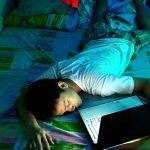