The Facts About Quitting Smoking 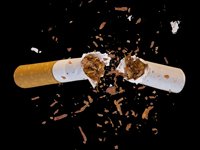 While 42 percent of all adult smokers try to quit in a typical year, only four to seven percent succeed.

Recently, pharmacy giant CVS announced that it will stop selling tobacco products in its 7600 retail stores across the nation as of October 1st.1 “Fattah Statement on CVS Decision to Stop Selling Cigarettes.” 7 February 2014. PrNewswire. 7 February 2014. http://www.marketwatch.com/story/fattah-statement-on-cvs-decision-to-stop-selling-cigarettes-2014-02-07 Take it as another sign that smoking increasingly is being viewed as an unacceptable activity by the mainstream–at least in developed countries. Those Americans who do smoke feel the sharp sting of social ostracism whenever they light up, which may be one reason that 68.8 percent of all smokers report that they want to quit.2 “Smoking and Tobacco Use.” Centers for Disease Control 7 February 2014. http://www.cdc.gov/tobacco/data_statistics/fact_sheets/cessation/quitting/

Despite the fact that the majority of smokers claim they want to permanently stomp out the butt, most fail in their attempts to do so. According to the CDC, “Nicotine dependence is the most common form of chemical dependence in the United States.6 Research suggests that nicotine may be as addictive as heroin, cocaine, or alcohol.”

The highly addictive nature of nicotine makes quitting difficult, to say the least. While 42 percent of all adult smokers try to quit in a typical year, only four to seven percent succeed. In fact, some sources say that for those attempting to quit for the second time, the success rate hovers around zero. In other words, the failure rate for quitting is sky high, leaving 136.7 million people smoking.

The dismal success rates apply to smokers trying the full range of available therapies. So, specifically, what are the predominant quit methods, and how successful is each?

The most common method of quitting is to use nicotine replacement therapy (NRT) products, which comprise a gigantic market, with worldwide sales expected to reach $6.2 billion by the year 2018.3 “Report: Nicotine replacement product sales to reach $6.2 billion worldwide by 2018.” Dsn.Drug Store News. 7 February 2014. http://www.drugstorenews.com/article/report-nicotine-replacement-product-sales-reach-62-billion-worldwide-2018 NRT products deliver small amounts of nicotine to help the smoker wean off the addictive substance. Over time, the user is then supposed to reduce the amount of the NRT product. NRT has an advantage over smoking in that NRT products lack the tar and 4000-plus chemicals found in cigarettes, at least 40 of which are known carcinogens.

NRT products include the nicotine patch, gum, and lozenge. There’s also a prescription gum, nasal spray, and an inhaler available. It can take anywhere from two to six months for any of the NRT therapies to work, although the patch tends to be faster. And yes, there is a possibility that the user can become addicted to the NRT product, but experts believe long-term use of the NRT is far safer than smoking, given the lack of additional chemicals delivered to the user.

In general, although it may be safer, NRT, like smoking itself, does have side effects. It may provoke some dizziness, headaches, nausea, digestive distress, and insomnia. And it may not be safe for pregnant women.

Another common quit therapy is to use prescription non-nicotine medicines–either Zyban or Chantix. Zyban is actually an antidepressant. It also works to help patients suffering from seasonal affective disorder. The side effect list is longer than the menu at The Cheesecake Factory. Some of the more common problems related to the drug include agitation, dry mouth, insomnia, headache, nausea, constipation, tremor, weight loss, allergic reaction, and seizures.4 “Zyban Side Effects Center.” RX List. 10 February 2014. http://www.rxlist.com/zyban-side-effects-drug-center.htm

Chantix (varenicline) can have even more chilling side effects, with an increased risk for heart attack and psychosis leading the list, followed by tremors, anxiety, lumps, fever, chest pain, suicidal ideation, swelling, red or black stools, and so on.5 http://www.ncbi.nlm.nih.gov/pubmedhealth/PMHT0012611/?report=details#side_effects

Experts recommend that all prescription approaches to quitting be accompanied by medical supervision and counseling. According to a study of more than 27,000 smokers who either attempted to quit or successfully did so, 31.7 percent used counseling or one of these NRT or pharmaceutical methods as an aid.6 “Quitting Smoking Among Adults–, United States, 2001-2010. Morbidity and Mortality Weekly Report. 10 February 2014. http://www.cdc.gov/mmwr/preview/mmwrhtml/mm6044a2.htm Here is how it breaks down: 14.6 percent used the nicotine patch,14.6% tried varenicline, 8.9% relied on nicotine gum or lozenge; 3.2% tried Zyban, and one percent used a nicotine spray or inhaler. Also, almost six percent tried counseling of some sort, including telephone quitlines, one-on-one meetings, or support groups.

Again, remember that of those using these various approaches, only five to seven percent succeed long term. A Cochrane study found that 93 percent of over-the-counter NRT users relapsed and started smoking again within six months.

It is possible to quit if you have enough determination, but you might not get the help you need from drugs and NRT aids. But here’s the bottom line: the CDC found that 90 percent of successful quitters did so by going “cold turkey”–not by investing in drugs or patches or inhalers. Plus, cold-turkey quitters tend to stick with their tobacco-free life as opposed to those who rely on crutches to quit. A 2005 article in the journal Addiction cited a study that found that one year after quitting, 25.5% of cold turkey quitters were still not smoking compared to only  “15.2% of NRT quitters, 14.4% of Zyban users, and 7.4% of those using both NRT and Zyban at the same time.”7 “90% of Ex-Smokers Quit Smoking Cold Turkey.” 31 December 20206. Why Quit. 10 February 2014. http://whyquit.com/pr/123106.html

In other words, if you have a strong will to quit, you might as well try the cheap and harmless methods first. Those would include going cold turkey, using hypnosis, meditation, prayer, counseling, and support groups. If you still can’t quit, you could give the patch a try, but it will only work if you have that same solid determination driving you–or if your doctor has instilled enough fear to motivate you to quit for good.

Oh, and make sure you don’t give up cigarettes just to switch to cigars or a pipe, which seems to be the current trend.

Gallery image with caption: Roundup: a Crack in the Wall

Gallery image with caption: Chemical Buildup on Your Toothbrush

Gallery image with caption: Fertility: the Canary in the Coal Mine