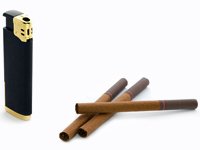 Giving up cigarettes for good is an important step on the road to health for everyone with smoking habits.  And many people have made the commitment and quit.  However, there are others who may have gotten rid of their cigarettes, but not their smoking habits, trading them in for other forms of tobacco instead such as cigars.

According to a new report from the Centers for Disease Control and Prevention, the number of people smoking cigars and pipes is on the rise.1  While there was good news in the report that the total use of smoked tobacco products has dropped 27.5 percent between 2000 and 2011, there was also a sharp rise in use of smoking items of a non-cigarette variety.  In fact, during that same time period, the consumption of non-cigarette smoked tobacco products skyrocketed by 123 percent.

A possible explanation as to why smokers are switching to other tobacco products such as cigar smoking may be due to price.  The recession and continuing economic woes have taken their toll on many consumers’ wallets and left them looking for their nicotine fix through a cheaper alternative.  Many have found just that in cigars and other non-cigarette items.  As of 2009, federal taxes on cigarettes are much higher than those for pipe tobacco, loose tobacco, and cigars, making cigarettes a comparatively costly option.

To take advantage of these lower rates for non-cigarette products, the tobacco companies made minor changes to some of their smaller cigars to make them more similar to cigarettes yet still allowing them to remain taxed at the lower rate.  In fact, these cigarette substitutes can be purchased for approximately $1.40 per pack, as opposed to true cigarettes, which typically cost in the range of $5-8 a pack — reaching $12.50 a pack in New York.2  And consumers are eagerly jumping on the bandwagon and dropping cigarettes in favor of cigar smoking.  Usage has been found to be especially high among younger smokers, who are now being set up for a potentially lifelong bad habit.

Cigar smoking has been demonstrated in other studies to be increasing in the young adult population.  A 2010 survey by the Substance Abuse and Mental Health Service Administration found that approximately 11 percent of Americans between the ages of 18 and 25 had reported smoking some type of cigar within the previous month.3  Most smoking habits are formed before the age of 25, so it’s not surprising that the tobacco industry does all it can to make cigar smoking appear glamorous to youths by recruiting athletes and celebrities to pose smoking them.  Certain manufacturers will even add chocolate or fruity flavors to their cigars to sweeten the taste for new smokers.

But smoking any type of tobacco product puts you at risk.  Some people may perceive cigars as less habit forming and dangerous because you take your time smoking one and don’t go through nearly as many in a day as you might with cigarettes.  But cigars are addictive.  They have anywhere from 100 to 400 milligrams of nicotine in them, packing a potent punch compared to cigarettes, which usually deliver one to two milligrams.4  That’s why these new cigarette-like small cigars represent a truly dangerous trend.  Nicotine is a very addictive substance, affecting the dopamine levels in the brain.  Once we become accustomed to it — and that happens very quickly for most smokers, especially those inhaling 100-400 mg per cigar — we start craving this drug and the good feelings it produces.5

Because of nicotine addiction, millions of smokers who know it’s bad for them nevertheless continue this habit.  And tobacco use is a major cause of preventable death and disease.  It is responsible for close to 500,000 fatalities in the United States alone every year.  Study after study has found tobacco to be associated with cancer, cardiovascular disease, fertility problems, and more.  So don’t let the tobacco companies fool you into trying their newer, less costly products.  Cigars, small cigars, cigarillos, and any other form of tobacco they want to sell you are every bit as dangerous as cigarettes, and the only way to protect yourself is by not smoking anything at all — e-cigarettes included.