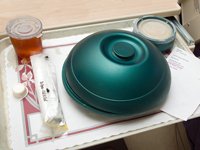 For most of us, surgery is a very scary prospect.  There are many risks involved, and we won’t put ourselves on an operating table unless we confirm that it’s truly necessary.  At that point, it is very important to follow pre-surgery instructions carefully to best prepare your body for the upcoming procedure–including when to stop taking certain medications and not to eat anything past a specific time.  And now, according to new research, it’s possible that eating a low-fat diet might eventually join the pre-surgical instruction list.

The study, conducted at Brigham and Women’s Hospital in Boston, Massachusetts, used laboratory mice as subjects to determine what if any difference dietary changes prior to undergoing surgery can make in recovery.1 “What You Eat Before Surgery May Affect Your Recovery.” Science Daily. 21 March 2013. Accessed 25 March 2013. http://www.sciencedaily.com/releases/2013/03/130321111015.htm   The mice were separated into two groups.  The first was fed a diet even higher in fat content than a typical Western diet, with 60 percent of their calories coming from fat (as opposed to the still-far-from-healthy 37 percent most Americans average).2 “Food For Life Cancer Project.” Physicians Committee for Responsible Medicine. Accessed 26 March 2013. http://www.pcrm.org/health/health/health/health/cancer-resources/diet-cancer/facts/breast-cancer   The second group was fed a standard mouse diet that derived 10 percent of daily calories from fat.

Three weeks prior to the scheduled surgery date, the scientists changed the diets of a segment of the high-fat eaters to the low-fat food meal plan.  As they performed common types of surgical procedures on the mice, they noted the response of fat tissue both at the location of the operation and in other areas of the body.  To access almost any body part, fat tissue needs to be cut through and manipulated.  Sure enough, the fat throughout the bodies of the mice was affected, showing increases in inflammation and decreases in the synthesis of specialized fat hormones.  Those most affected were the young adult mice and the mice in which the researchers created an infection similar to that of a wound, which is a common surgical complication.3 Knott, Laurence. “Common Postoperative Complications.” Patient. 11 February 2013. Accessed 26 March 2013. http://www.patient.co.uk/doctor/common-postoperative-complications

However, in the mice with the low-fat food diets, and even those whose diets were altered just a few weeks pre-surgery, the fat tissues displayed much less of the trauma found in the mice with the high-fat diets.  This may likely be because there was simply a smaller amount of fat tissue present to be affected in the mice with the healthier diets. So if fat deposits have trouble dealing with trauma, it makes sense that those with less fat experience an easier recovery.  Not to mention the fact that the antioxidants in many fruits and vegetables that are usually consumed in larger quantities in low-fat diets were shown in a 2010 study at the Federal University of Paraiba in Joao Pessoa, Brazil, to decrease levels of inflammation after surgery.4 Lima, RL, et al. “Consumption of fruits and vegetables and C-reactive protein in women undergoing cosmetic surgery.” National Library of Medicine. September-October 2010. Accessed 26 March 2013. http://www.ncbi.nlm.nih.gov/pubmed/21336433 That’s certainly a healthier, safer way to control inflammation than taking an array of medication.

While experiments on mice don’t always correlate so neatly to the same results in humans, it does stand to reason that with fat making up between 18 and 31 percent of an average human body,5 “Percentage Body Fat & Weight – What’s Normal?” Fitday. Accessed 26 March 2013. http://www.fitday.com/fitness-articles/fitness/weight-loss/percentage-body-fat-weight—whats-normal.html#b there is certainly a good chance that it would be affected during a traumatic event such as surgery.  In fact, a 2007 study at the University of Michigan in Ann Arbor found that obesity greatly increases the risk of post-surgery complications.6 Warner, Jennifer. “Surgery Risks Higher for Obese.” WebMD. 14 March 2007. Accessed 26 March 2013. http://www.webmd.com/diet/news/20070314/surgery-risks-higher-for-obese   So clearly, a change to a lower-fat diet couldn’t possibly hurt prior to undergoing any type of surgical procedure.

And along with the list of medications your doctor will provide that need to be stopped before having an operation, there are herbs and supplements to discontinue as well.  Not every physician will think to ask about what natural or alternative therapies you use, and some can have just as much impact on your body during and after surgery as pharmaceutical drugs.  For instance, cumin, garlic ginger, ginkgo biloba, milk thistle, Omega 3 fatty acids, St. John’s wort, and proteolytic enzymes have all been found to affect the clotting of the blood, which–although a good thing normally–can promote bleeding during and after surgery.7 “Medications and Herbs Which Affect Bleeding.” University of Wisconsin Health. 20 June 2011. Accessed 26 March 2013. http://www.uwhealth.org/healthfacts/B_EXTRANET_HEALTH_INFORMATION-FlexMember-Show_Public_HFFY_1126651115765.html   Therefore it is important to stop taking herbs, supplements, and vitamins at least 10 days before a procedure and for a week afterward if possible. On the other hand, supplementing with vitamin K can improve clotting, so that might be advisable.8 Jane Higdon. “Vitamin K.” OSU, Linus Pauling Institute.May 2004. (Accessed 26 Mar 2013.)  http://lpi.oregonstate.edu/infocenter/vitamins/vitaminK   You can get back on track with your usual regimen once you have completed the initial recovery phase and hopefully put the hospital experience far behind you.