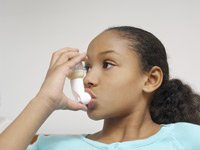 Asthma is a chronic problem with the airways of the lungs that can cause coughing, wheezing, and difficulty breathing.  It is also a disease on the rise, with the number of people suffering from asthma increasing from one in 12 people in 2009, up from one in 14 in 2001.  And in certain high risk populations, such as African American children, the disease grew by nearly 50 percent during that eight-year period.1 “Asthma in the US.” Centers for Disease Control and Prevention. May 2011. Accessed 31 May 2013. http://www.cdc.gov/vitalsigns/asthma   Asthma is treated by most doctors with a veritable cornucopia of medications, ranging from inhalers to pills to liquids breathed into the lungs via a nebulizer. But recent research has started to confirm what we’ve been saying for years: that there are natural health remedies that may be able to provide relief similar to these medications, enabling asthma sufferers to rely less on drugs while improving their symptoms.

One study, which was conducted at Columbia University in New York City, found that ginger compounds appear to be effective in relaxing inflamed airways in much the same way that pharmaceuticals do without all of the potential side effects.2 “Ginger Compounds May Be Effective in Treating Asthma Symptoms, Study Suggests.” Science Daily. 19 May 2013. Accessed 30 May 2013. http://www.sciencedaily.com/releases/2013/05/130519145647.htm   Using tissue samples of human airway smooth muscle (ASM), the scientists created a bronchoconstriction reaction in the tissue similar to that experienced during an asthma attack.  They achieved this by exposing the ASM samples to acetylcholine, a neurotransmitter within the central nervous system.  The ginger was broken down into several different components, including 6-gingerol, 8-gingerol, and 6-shogaol.  Each of these substances was then added to a commonly used asthma medication, isoproterenol, which is part of the beta-agonist family.  The constricted muscle tissue was then treated with the isoproterenol alone or in combination with one of the three ginger elements.

The ASM tissue samples that had received applications of ginger mixed with the beta-agonist were all considerably more relaxed than those samples that had received the medication only.  When comparing the effects of the three ginger compounds with each other, the 6-shogaol proved to provide the greatest degree of relaxation in the tissue.  To gain a better understanding of just how the ginger works to relax the muscles, the researchers tested whether its compounds affect an enzyme known as phosphodiesterase4D.  This enzyme, present in the lungs, has been found in earlier studies to inhibit reactions that promote the relaxation of ASM and reduce inflammatory responses.  Each of the three elements of the ginger reduced the enzyme’s effects to a measurable degree.

In a separate study that took place at King’s College London in the United Kingdom, researchers determined that vitamin D also appears to have a positive effect on asthma symptoms.3 Paddock, Catharine. “Vitamin D May Help Treat Asthma.” Medical News Today. 21 May 2013. Accessed 31 May 2013. http://www.medicalnewstoday.com/articles/260770.php   The 38 participants were broken down into three groups based on their health.  One group consisted of subjects with asthma that was satisfactorily relieved when steroid medications were taken, another group had asthma that did not respond to steroid treatments, and the third group was a healthy control group that did not have asthma.

The focus was on a chemical produced within the immune system called interleukin-17A, which can fight infection but also seems to aggravate asthma in susceptible individuals when larger quantities are produced.  The researchers analyzed how much IL-17A was produced by each of their bodies and, unsurprisingly, those without asthma have the least of the chemical, those with asthma that responds to steroids have more, and those with steroid-resistant asthma have the highest levels.

The volunteers were then given vitamin D, which was found to lower the levels of IL-17A across the board in all of the subjects, asthmatic or not.  Interestingly, the steroids being taken by the patients with asthma did not produce a notable effect on the levels of IL-17A.  If these results can be duplicated in a larger study, it would certainly be very helpful to the individuals with severe cases of asthma who cannot find relief from prescription medications.  And other asthma sufferers would likely be able to cut back on dosages of their drugs as well.

Ultimately, both of these studies may provide a win-win situation for people with asthma.  They get the health benefits of ginger (alleviating nausea, reducing inflammation, and lowering cholesterol4 “Ginger.” University of Maryland Medical Center. 2011. Accessed 31 May 2013. http://www.umm.edu/altmed/articles/ginger-000246.htm ) and/or vitamin D (which benefits the bones, prevents diabetes,5 Totty, Patrick. “Vitamin D Deficiency Common in People With Poor Diabetes Control.” Diabetes Health. 4 July 2010. Accessed 31 May 2013. http://diabeteshealth.com/read/2010/07/04/6747/vitamin-d-deficiency-common-in-people-with-poor-diabetes-control-/?isComment=1 and much more) in addition to relieving their asthma, while at the same time reducing their dependence on prescriptions that can provoke such side effects as rapid heartbeat, shaking, decreased resistance to infection, mood swings, insomnia, heartburn, increased appetite, osteoporosis, and the development of cataracts.6 “Side effects of asthma medicines.” Asthma UK. Accessed 31 May 2013. http://www.asthma.org.uk/knowledge-bank-treatment-and-medicines-side-effects-of-asthma-medicines

For more on asthma, check out