Marital Happiness May Be in Your Genes 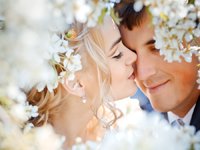 A recent study found that a gene known as 5-HTTLPR may hold the key to whether we will be happy in a long-term marriage.

Everyone wants to find love, happiness, and fulfillment in their lives.  A good, stable marriage can take you far in achieving all three of these elements.  But, with divorce rates hovering near 50 percent in the United States, how do you make a marriage successful?  According to new research, it would seem that we may not have all that much control over our marital harmony. Instead, it may be mainly a result of our genetic blueprints. Or to paraphrase William Shakespeare, “The fault, Dear Brutus, is not in our stars but in ourselves–in fact, deep within our very DNA.”

The study, which was conducted in a joint effort by scientists at Northwestern University in Evanston, Illinois, and the University of California, Berkeley, found that a gene known as 5-HTTLPR may hold the key to whether we will be happy in a long-term marriage.1 “Happy hormone’ may help predict wedded bliss.” Fox News. 11 October 2013. Accessed 17 October 2013. http://www.foxnews.com/health/2013/10/11/happy-hormone-may-help-predict-wedded-bliss   This gene is known to affect our production of serotonin, a hormone released in the brain that can greatly influence our moods. A person inherits certain traits on the 5-HTTLPR gene, either receiving two long alleles, one long and one short allele, or two short alleles in their DNA. (Incidentally, an allele is one of two or more genes that contain specific inheritable characteristics that occupy corresponding positions on paired chromosomes.)

The study subjects were 156 married couples who were all at least middle aged when the research began.  A DNA sample was taken from each participant and interviews were conducted to determine the emotional status of the couple’s relationship.  Follow-ups continued for a 13-year period, during which time the volunteers were regularly asked questions about how well they get along with their spouse. Far more common among the couples in this study were those with either two long alleles or one long and one short, comprising more than 83 percent of the volunteers.

The other 17 percent of the spouses possessed two short alleles.  It was this smaller grouping that was found to exhibit far less emotional stability within their marriage than their peers with either of the other gene variant combinations.  In fact, they appeared to express all of their emotions to a greater degree, so during the more positive times in the marriage, they perceived themselves as very happy and during tough periods, they perceived themselves as very upset.  In contrast the other volunteers remained more neutral in their responses about their emotional well-being regardless of whether the marriage might be going through a relatively good or bad phase.

While this research leads to an interesting discovery, it would be a little stronger if its size was larger and a very diverse ethnic and geographic population was included. It is possible that a broader array of thousands of individuals might change the outcome to some extent.  And it might also be beneficial to determine if having two short 5-HTTLPR alleles results in some shortage of serotonin production, and therefore that is what causes more instances of emotional volatility.  A 2011 study at Oxford University in the United Kingdom determined that our levels of serotonin affect our perception of intimacy and romance, so it stands to reason that a gene influencing this hormone might alter how we perceive our own relationships.2 “Serotonin, A Critical Chemical For Human Intimacy And Romance.” Medical News Today. 15 April 2011. Accessed 18 October 2013. http://www.medicalnewstoday.com/releases/222449.php

In any case, since we cannot change the genes we were born with, it is really up to each individual person to make changes in the way they handle various situations and stress and anxiety if they want to take steps to improve their marriage.  While a doctor may suggest an antidepressant to boost serotonin levels or another pharmaceutical drug to level off peak emotions, these come with the risk of major side effects.  Plus, there are some things you can do that naturally increase serotonin production in the brain.

Another thing to consider is that while most of us crave the stability and security of an even-keeled, strong relationship, that may not be the recipe for a happy marriage for everyone.  We all know people who prefer the excitement of arguments and drama and will go to lengths to create some if things are too calm.  Some of them may very well have two short alleles, and they might not want to change a thing.  And to each his own, if what you’ve got is working for you!