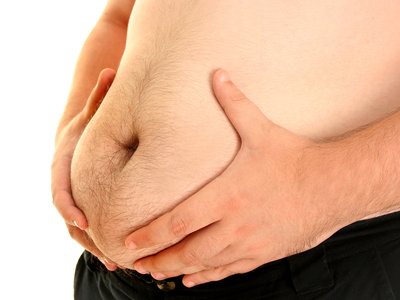 As we age, most of us find we are not quite so trim in the middle as we used to be. Whether it is due to having had a few children, sitting all day at a desk job, or just the natural course of getting older, many people find their waistlines have expanded and they have gone up a size or two (or four) in pants. But as long as you are still in a healthy weight range for your height, some love handles and a muffin top aren’t really so terrible, are they? Well, new research has found that, in fact, they may be. Having excess weight around the midsection has been linked with serious disease, even in those with a normal body mass index.

The study, which was lead by scientists at the Mayo Clinic in Rochester, Minnesota, found that having a large waist circumference increased the risk of developing cardiovascular disease, respiratory illnesses, and cancer, as well as dying prematurely.1 “Large waist linked to poor health, even among those in healthy body mass index ranges.” Science Daily. 12 March 2014. Accessed 17 March 2014. http://www.sciencedaily.com/releases/2014/03/140312114559.htm The subjects were 650,386 men and women between the ages of 20 and 83 from various nations. The researchers analyzed information collected in 11 cohort studies involving the weight, waist size, and medical records of the participants. They discovered that individuals with significantly larger bellies were much more likely to have health issues than their counterparts with smaller waistlines, even if their BMIs were not at 25 or above, which is considered overweight.

The men who had a waist circumference of 43 inches or greater were found to have a mortality risk that was 50 percent above that of men who had waists less than 35 inches in circumference. This difference was determined to be responsible for a life expectancy that was approximately three years lower for those over 40 years old. And, while you might think that men have more of a problem with big midsections and face greater dangers because of it, the study found that the outcomes were even worse for women.  Those women with a waist circumference of 37 inches or more faced a mortality risk that was found to be approximately 80 percent higher than that of women whose waists were 27 inches in circumference or smaller. In addition, their life expectancy was roughly five years less after the age of 40.

While the 37-inch mark for women and 43-inch mark for men acted as a benchmark of sorts for the purposes of the research, these are not magical numbers that lead to danger once the threshold is crossed. Instead, the scientists determined that the health hazards of having too much fat around the middle rose steadily along the way. Each instance, an additional two inches in circumference caused the mortality risk to jump by approximately seven percent in men and nine percent in women.

These findings held up even after controlling for other influential factors including smoking habits, physical activity levels, use of alcohol, and BMI. And interestingly, this increased risk of early death was found to rise in subjects as waist circumferences expanded, no matter what their BMI. So not only were the overweight and obese individuals noted to have a higher mortality rate, but even those with a BMI in the normal range who had a larger waistline were at an elevated risk as well.

Regular readers of Jon Barron’s columns should not be too surprised at these findings, as it has been noted here before that as handy as BMI can be to provide some crucial information on health, it is far from a perfect measure. In fact, it can be way off base when it comes to certain muscular people or, as in this case, those with a concentrated area of body fat. Measurements such as the Body Adiposity Index developed by researchers at the University of Southern California in Los Angeles that take hip circumference into consideration may prove to be more accurate.2 Bergman, Richard N.; et al. “A Better Index of Body Adiposity.” Obesity. 6 September 2012. Accessed 18 March 2014. http://onlinelibrary.wiley.com/doi/10.1038/oby.2011.38/abstract And on the topic of belly fat dangers, Jon Barron noted back in 2007 that even thin people can have major deposits of internal fat, which surround the vital organs. In fact, as he explained, it’s possible to be both obese and anorexic at the same time–to look thin but have a high percentage of body fat.

The good news that surfaced in the current study is that the disease and mortality risk appears to be on somewhat of a sliding scale, depending on the girth of the waist. Therefore, if you tend to gain in the midsection, it is definitely in your best interest to make the effort to whittle away at it. By incorporating a healthy, low-calorie diet and daily exercise routine, you can take your waist down by several inches–leaving you looking and feeling great and cutting your mortality risk with every additional notch on your belt.

United Kingdom Women are the Heaviest in Europe