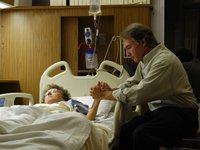 Doctors wielding knives, infections on the loose, high bills, sleeping in a strange bed—these are some of the reasons you might dread going to hospital.  You probably haven’t given much thought to an additional factor that can make you feel even worse once you tuck into the hospital bed.  According to a new study, the lighting in your hospital room may contribute to increased pain and exhaustion, crippling a healthy immune system. And yes, this is the second study in a row that we’ve discussed that focuses on the effects of light on health.

The study, conducted by the Cleveland Clinic’s Nursing Institute, found that most hospitals keep the lighting in rooms dim during the day, and that throws off the patients’ circadian rhythms, disturbing sleep.1 Esther Bernhofer, Patricia Higgins, Barbara Daly,et al. “Hospital lighting and its association with sleep, mood and pain in medical inpatients.”  J Adv Nurs 1365-2648. 27 OCT 2013. http://dx.doi.org/10.1111/jan.12282 Of course, getting sleep in a hospital room is a challenge even under the best of circumstances. Patients have to contend with blinking monitors, constant noise, interruptions day and night, and lights in the corridor at bedtime, to say nothing of pain that might keep them awake.  Keeping the lighting dim in the room during the day might seem to be a kindness and wise choice since patients need to rest and catch up on sleep lost at night, but the researchers found quite the opposite.

The study followed 40 individuals admitted to the Cleveland Clinic between 2011 and 2012. Each patient wore a wrist monitor to track his or her sleeping and waking patterns over 72 hours. Then, the patients filled out questionnaires reporting on their mood, fatigue, and pain levels.

It turned out, not surprisingly, that all the patients in the study experienced poor, interrupted sleep averaging four hours a night. That’s typical in a hospital. The surprise was that those exposed to the lowest levels of light during the day reported more pain and increased depression, and increased stress and anxiety, compared to patients in more brightly lit rooms.

If you’ve never noticed the dim lighting in the hospital, consider that the average daytime light level in the hospital rooms observed during the study was 150 lux. In comparison, the lighting in an average office setting measures around 500 lux. If you go outside in bright sunshine, you can be exposed to more than 100,000 lux. Yes, you read that correctly:  we’re talking150 VS 100,000!

The researchers note that in order to establish a normal sleep pattern, people need to be exposed to at least 1500 lux for 15 minutes a day. That’s the bare minimum. For improved sleep health, which can lead to a healthy immune system, at least 4000 lux per eight hour cycle is recommended. Obviously, hospital patients get nowhere near that amount. In fact, office workers barely reach that level—an argument for going out for lunch instead of staying glued to the desk or grabbing a burger in the basement cafeteria.

These findings, of course, have implications even for those not hospitalized, but also for anyone who wants to sleep well. Most wisdom on insomnia recommends steering clear of media and flashing lights close to bedtime. We’ve written before about how important it is to sleep in a darkened room, avoiding any light exposure at all to the extent possible. But this study points out that while nighttime preparation for sleep is essential, so is letting your body soak up light during the day.

The study points to one simple thing hospitals can do to help patients heal, reduce stress and anxiety, and maybe, to cut infection rates—turn up the lights. Again, sleep is a critical factor in healing. When we read reports about hospital safety, we tend to focus on things like unsanitary conditions and human error. Certainly these are horrifying realities that cause delayed healing and even unnecessary death, but perhaps part of a hospital’s rating should be based on how well it allows patients to sleep. Now we know, if this study proves accurate, that part of that equation involves providing adequate daytime lighting. And in fact, this study merely confirms a previous discussion we had concerning the role of sleep deprivation in the onset of post-hospital syndrome.

Study director Esther Bernhofer points out, “It makes sense that if a loved one is recovering, and they can be moved to an area with brighter, more natural light such as that directly in front of a window, that their mood may improve and that they may sleep better.”

By the way, although we’ve written before about the essential need to cut lights when you tuck in for the night, it turns out that certain types of night lights have a more disruptive effect on sleep and mood than others. Most night lights use white light, and those are a poor choice if you want to sleep well and wake up cheery. If you must have a night light, make it red. A study reported in the Journal of Neuroscience found that in hamster research, after a month of exposure to either red, blue, white, or no light, the hamsters who experienced red lights had the lowest rates of depression.2 Wilkinson, Allie. “Night Light Color Could Be Attitude Adjuster.” 28 October 2013. Scientific American. 8 November 2013. http://www.scientificamerican.com/podcast/episode.cfm?id=night-light-color-could-be-attitude-13-10-28 (In case you’re wondering how researchers can tell if hamsters feel depressed, they don’t stick them on a couch and ask them questions about their mothers. Rather, depressed hamsters lose interest in drinking sugar water.) On the other hand, a blue light had the most detrimental effect.

In fact, an earlier Harvard University study comparing blue and green light found that blue light suppressed melatonin, a hormone that helps us sleep, for twice as long as green light.3 “Blue Light Has a Dark Side.” Harvard Health Letter. http://www.health.harvard.edu/newsletters/Harvard_Health_Letter/2012/May/blue-light-has-a-dark-side If you think this is irrelevant to you since you have no blue light bulbs in your house, think again.   Computer and television screens tend to emit lots of blue light. Also, those energy-efficient compact fluorescent light bulbs and LEDs produce far more blue light than the old fashioned incandescent bulbs. When you think about it, maybe it’s not just a poetic thing that the blues are called “the blues” and not “the reds.” Maybe it’s based on an intuitive understanding by the first great bluesmen of the effects of light and color on our psyches.