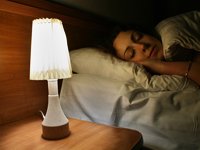 Move over Seasonal Affective Disorder (SAD), the depressive condition caused by lack of light during long winters. Make way for a form of depression caused by too much exposure to light. According to researchers at the Ohio State Medical Center, it’s not a good thing to have light exposure when you’re sleeping.1 Not any at all. That means no night lights, no blinking electronic devices, no television on to sleep with. And it’s also not great to be subjected to light at bedtime, before you fall asleep. That’s because sleeping with lights on triggers depression.

For a long time, Jon Barron has been saying that letting light touch any part of the body while sleeping activates the pineal gland, and that, in turn, stops the production of the hormone melatonin. Melatonin works to induce sleepiness; the lack of it interferes with getting deep, restful sleep. So if you have lights on at night, you probably aren’t producing enough melatonin to get the restful sleep your body and mind require.

The Ohio State Medical Center researchers set out to see what would happen to hamsters if they exposed them to very dim light while they slept. Every night when the mice got tucked in, a low-level light was left on for eight hours, at a brightness level similar to the nightlight that we humans often sleep with. A control group of mice got to sleep in total darkness for those same eight hours.

At the end of four weeks, the hamsters that had the nightlight exposure went into a deep rodent funk. They were listless compared to the control group and showed less interest in drinking their sugar water, a treat they normally would have attacked with zest. (Just think how depressed you’d have to be to turn down your daily sugar fix.) Keep in mind that this depression occurred though the hamsters had been subjected to just the tiniest bit of light. The measure for normal daylight is 150 lux; the hamsters had just five lux shining in their cages. That’s the equivalent of having a TV on in a darkened room.

In the cruel world of animal research, anything goes, and so after the poor light-drenched hamsters suffered depression, they were killed and autopsied. (Maybe that’s why they were depressed — they knew what was coming.) The researchers found changes had occurred in the hippocampus region of their brains, including an increased expression of a chemical called TNF that’s linked to inflammation resulting from injury or infection. Dr. Randy Nelson, one of the study directors, said,”Researchers have found a strong association in people between chronic inflammation and depression. That’s why it is very significant that we found this relationship between dim light at night and increased expression of TNF.”

By the way, if you’re thinking what goes for hamsters doesn’t apply to you, another of the researchers, Dr. Tracy Bedrosian, says, “The results we found in hamsters are consistent with what we know about depression in humans.”2 In other words, the results show that playing with your computer late at night or staring at the television just may invite the blues. If you leave the screen on all night and sleep in the room with it, that’s double the damage.

Although this study focused on mood and night light, depression is hardly the only worrisome effect that comes with nighttime immersion in light. I recently wrote about the elevated incidence of numerous deadly diseases among people who work the night shift. Operating in light at night and darkness during the day throws off the circadian rhythms, triggering biochemical shifts that lead to an increased incidence of cancer, diabetes, cardiovascular disease, ulcers, diabetes — and yes, depression.

And the news gets worse!

As it turns out, these same negative health effects may also result from low-levels of night-time light exposure among people who work normal hours. According to a recent report issued by the American Medical Association,”In addition to resetting the circadian pacemaker, light also stimulates additional neuroendocrine and neurobehavioral responses including suppression of melatonin release from the pineal gland … Low levels of illuminance in the blue or white fluorescent spectrum disrupt melatonin secretion.3 The primary human concerns with nighttime lighting include disability glare (which affects driving and pedestrian safety) and various health effects. Among the latter are potential carcinogenic effects related to melatonin suppression, especially breast cancer. Other diseases that may be exacerbated by circadian disruption include obesity, diabetes, depression and mood disorders, and reproductive problems.”

The good news here is that the researchers found that restoring the hamsters to sleeping in darkened environments reversed the depressive effects after two weeks. Since the hamsters only had disrupted sleep for eight weeks, it’s unclear whether exposure to night light for years would be reversible in such short order. Even so, Dr. Bedrosian says,”People who stay up late, in front of the television and computer, may be able to undo some of the harmful effects just by going back to a regular light-dark cycle and minimizing their exposure to artificial light at night.”

For many of us, the suggestion means a lifestyle change. No more late-night dates with the television, the computer, the video-game device. We just might have to talk to each other after sunset, take a walk, or — now here’s a radical idea embraced by our ancestors — go to bed. Or if all else fails, you can at least try taking a timed release melatonin supplement.