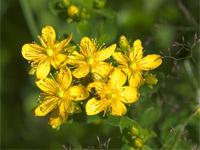 If you look closely enough, nature seems to have an answer for everything. Even more surprising is just how much our ancestors knew this to be true. Case in point: one of the most common herbs used for depression in the United States today is St. John’s wort.

“Nature cures, not the physician.” –Hippocrates

If you look closely enough, nature seems to have an answer for everything. Even more surprising is just how much our ancestors knew this to be true. Case in point: one of the most common herbs used for depression in the United States today is St. John’s wort. And if you follow Jon Barron’s newsletters, he even points out that it is the most popular antidepressant in Germany too, outselling Prozac 3-1! The use of this particular herb can be dated back to the ancient Greeks, when Hippocrates recorded its medicinal properties.

TWEET One of the most common herbs used for depression in the U.S. today is St. John’s wort. @BaselineHealth

The name itself has an ancient history. The flower is often in full bloom around June 24th, which is the day celebrated as John the Baptist’s birthday. The word “wort” means “plant” in Old English. Since medieval times, to celebrate this day, it is customary to gather the herb and hang it over doors, windows, and icons as a preventive measure to keep evil away.

Its ability to fight “evil spirits” or “demons” is actually what led the herb to its current depression fighting application. The ancients, in fact, believed that evil forces or demons were responsible for making people melancholy or downcast. Since treatment with St. John’s wort provided a calming or sedating effect, the herb began to develop a reputation for having a spiritual power that was able to protect individuals from being tormented by evil spirits.

As interesting as the history of this herb may be, its medicinal uses are equally, if not more, fascinating. Today, as in the past, the herb is most commonly used to naturally treat depression and its symptoms. It is licensed in Germany and other European countries as a treatment for mild to moderate depression, anxiety, and sleep disorders.

Sometimes called “Nature’s Prozac,” St. John’s wort helps relieve stress, anxiety, and tension. As you can imagine, this herb has been studied extensively. In fact, more than 20 clinical studies have been completed using several different St. John’s wort extracts. Most have reported antidepressant action equal to standard prescription antidepressant drugs, without the side effects.

In some studies, it has been shown to improve the mood of people suffering from seasonal affective disorder (SAD), a type of depression brought on in the winter months due to the lack of sunlight. There is also evidence that the herb works even better when combined with the traditional treatment for SAD: light therapy.

Of course, as with most of nature’s health remedies, it isn’t just a one-trick pony. St. John’s wort has also been used to treat a myriad of other conditions. For instance, one study has shown that the herb may be helpful in relieving a number of the physical and emotional symptoms of PMS, including cramps, irritability, food cravings, and breast tenderness.

In addition, a few studies suggest a combination of St. John’s wort and black cohosh can help improve mood and anxiety in menopause.

The herb also has antibacterial properties and may help with fighting inflammation. Used as a topical treatment, it can help relieve symptoms that are associated with minor wounds and skin irritation, as well as help heal burn wounds. St. John’s wort can also help ease nerve-related ache such as sciatica and neuralgia as well as help with arthritis and rheumatic aches. This is why you wil find it as an ingredient in some natural topical pain relief products, inlcuding Jon Barron’s Essential Relief formula.

The herb has also been promoted to help treat:

Studies on St. John’s wort continue as scientists and researches keep delving into the full medicinal potential of this herb. Some studies have shown that the herb may be effective in lessening withdrawal symptoms from nicotine and helping reduce the craving for alcohol. More studies are needed to further confirm these possibilities. The herb is also being studied as a potential treatment for HIV/AIDS, hepatitis C, and other viral illnesses. And it is being studied as a treatment for obsessive compulsive disorder (OCD) as well as other social phobias.

How to Take St. John’s Wort

St. John’s wort can be found in many forms – from capsules, tablets, and extracts to tinctures, teas, and even a powder.

Because St. John’s wort can accelerate the speed at which your body breaks down certain substances—both natural and synthetic, it can interfere with the action of several types of drugs including: immunosuppressants used for organ transplants, antiretrovirals used in the treatment of HIV, benzodiazepines, certain ADHD drugs, hormonal contraception pills and devices, anticonvulsants, and digoxin. And it may, in rare cases, increase sensitivity to light in both the eyes and the skin. Because of this, France has banned the use of St. John’s wort in products. In other countries St. John’s wort is only available with a prescription. The bottom line is that if you are on any medications, or under a doctor’s care for any medical condition, St John’s wort should only be taken under the guidance of a health care provider. But keep in mind that there is nothing inherently unsafe about St. John’s wort when taken at normal doses.