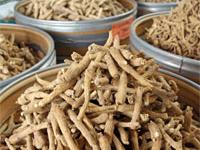 Ginseng has received much attention as an herbal remedy over the years. Maybe previous cultures knew what we are starting to discover since ginseng has been used for over 2,000 years.

Ginseng has received much attention as an herbal remedy over the years. Maybe previous cultures knew what we are starting to discover since ginseng has been used for over 2,000 years. The botanical name Panax means “all-heal” in Greek and for good reason. Ginseng is claimed to help all types of ailments and conditions ranging from stress and poor memory to diabetes and male impotence. Ultimately, though, herbalists identify it as an adaptogen—an herb that decreases cellular sensitivity to stress.

One thing to point out, due to the many different species of ginseng, other plants may be referred to or mistaken as the ginseng root. While they may have the name of ginseng, each plant provides different and varying medicinal benefits. In fact, only plants that belong to the Panax genus are true ginseng plants. Let’s take a look at the more popular plants.

American Ginseng
Panax quinquefolius is native to eastern North America, this ginseng plant was traditionally used by Native Americans. Today it can be used to treat a number of ailments and conditions. It has been used for stress, to boost the immune system, to help fight infections such as the cold and flu and to improve digestion – to name a few.

It may also provide help with diabetes problems. According to the U.S. National Library of Medicines Natural Medicines Comprehensive Database website, “Taking 3 grams of American ginseng by mouth, up to two hours before a meal, can significantly lower blood sugar after a meal in patients with type 2 diabetes.”

In addition, the website above also states that “Some evidence suggests that taking a specific American ginseng extract called CVT-E002 (Cold-FX, Afexa Life Sciences, Canada), 200 mg twice daily over a 3-4 month period during influenza season, might help slightly to prevent cold or flu symptoms in adults between the ages of 18 and 65.”

In Asia, American Ginseng Root is commonly included in health supplements and herbals used for assisting with sexual dysfunction. Recent studies in laboratory animals have shown that both Asian and American forms of ginseng enhance libido and copulatory performance. These effects of ginseng may not be due to changes in hormone secretion, but to direct effects of ginseng, or its ginsenoside components, on the central nervous system and gonadal tissues. Moreover, the effects of ginseng on the corpus cavernosum appear to be mediated by the release and/or modification of release of nitric oxide from endothelial cells and perivascular nerves.

Therapy with American ginseng also affects the central nervous system and has been shown to significantly alter the activity of hypothalamic catecholamines involved in the facilitation of copulatory behavior and hormone secretion. Recent findings that ginseng therapy not only decreased prolactin secretion but also suggested a direct nitric oxide-mediated effect of ginseng at the level of the anterior pituitary. In fact, this research is so profound, it is the reason Jon Barron uses American ginseng in his Men’s Formula.

Siberan Ginseng
As the name implies, Siberian ginseng is native to East Russia. Today it continues to grow in Russian and China. While it carries the name ginseng, this plant is not a true ginseng as it is not from the genus Panax. In fact, true herbalists no longer use the name Siberian Ginseng, but instead refer to the herb as Eleutherococcus, or Eleuthero. The active ingredients in Eleuthero, called eleutherosides, are thought to stimulate the immune system.

It is widely used in Russia to help the body better cope with either mental or physical stress. There have been studies that show it may be effective in diminishing symptoms of colds and flus in a shorter period of time. It is also been used to increase mental alertness, improve athletic performance, and increase muscle strength.

Eleuthero is available as liquid extracts, solid extracts, powders, capsules, and tablets, and as dried or cut root for tea and should not be given to children. You will find Eleuthero in Jon Barron’s Women’s Formula.

Korean Ginseng
This ginseng may be known as Asian, Chinese, or Korean ginseng and refers to the plant native to North Korean and China, Panax schinsen. It has been used for a variety of issues including unclear thinking, diabetes, and male erectile dysfunction. Some studies have shown that Asian ginseng may lower blood glucose. Other studies indicate possible beneficial effects on immune function.

Traditional and folk uses of ginseng include improving the health of people recovering from illness; increasing a sense of well-being and stamina; improving both mental and physical performance; treating erectile dysfunction, hepatitis C, and symptoms related to menopause; and lowering blood glucose and controlling blood pressure.

Ginseng Instructions
You can find ginseng as a tea, capsule, powder, or in a tincture. Dosages depend on how you are using it. Ginseng is very safe, but you may not want to use it if you are pregnant or breast-feeding to stay on the safe side. People with diabetes who are taking medications to lower blood sugar might lower it too much by adding ginseng. Monitor your blood sugar closely if you have diabetes and use ginseng.  Lastly, you may want to proceed with caution if you have a bleeding condition or insomnia. However, note that people who had trouble sleeping on ginseng were only on very high doses.

How can you tell what’s a good food choice? Click here for more information.

Healthcare & HospitalsHerbal Remedies and Their Uses