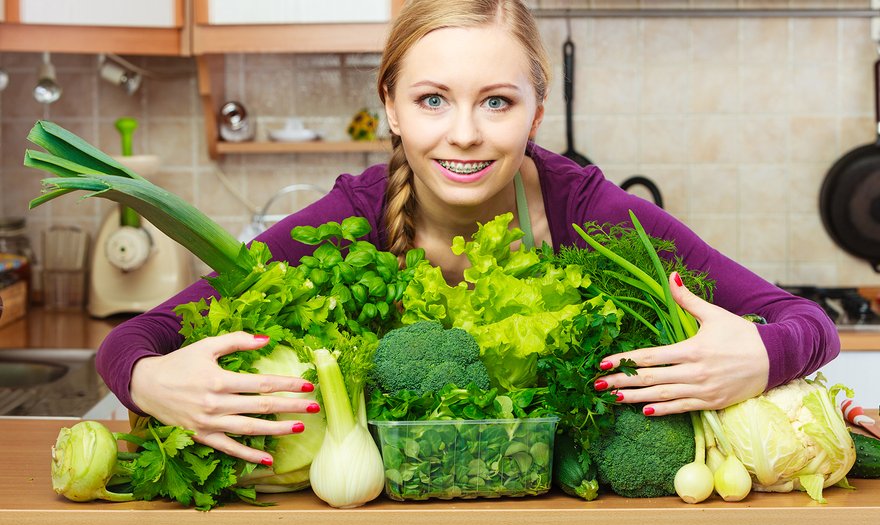 Lots of kids don’t like vegetables. They’ll push them around their plates in an attempt to disguise the fact that barely a bite has been eaten. But leafy green vegetables are a great source of vitamin K, which is essential for your children’s health. In fact, new research suggests that a lack of vitamin K might seriously affect adolescent heart health.

The study, which took place at the Medical College of Georgia at Augusta University, found that teens who do not eat an adequate amount of vitamin K foods such as leafy green vegetables are more likely to have an enlargement of the left ventricle of the heart.1 Douthit, Mary K.; et al. “Phylloquinone Intake is Associated with Cardiac Structure and Function in Adolescents.” Journal of Nutrition. 1 October 2017. Accessed 10 October 2017. http://jn.nutrition.org/content/147/10/1960.full?sid=6a2d7f7a-035f-48b0-a592-9ef5ebe86343. These results were determined from an analysis of 766 male and female youths ranging in age from 14 to 18, all of whom were in good physical health.

Each of the subjects wore an activity monitor for seven days to establish their exercise patterns, and they were asked to keep track of all of the foods consumed during much of this time period. In addition, echocardiography testing was performed, which provided a detailed image of the left ventricle of the heart.

The participants who ate the fewest foods rich in vitamin K were shown to have three times the risk of a left ventricle enlargement in the heart than their counterparts who consumed more of these foods, including collard greens, spinach, kale, broccoli, and blueberries. The teens, in general, were nowhere near reaching sufficient vitamin K intake from their diets, with only 25 percent of them obtaining adequate levels of this vitamin.

Even after controlling for other influential factors, such as race, gender, physical activity levels, and blood pressure rates, the results remained the same. But the study does have some shortcomings. The size of the population sample included was not terribly large and, even more importantly, was based on just a week’s worth of eating or less. That may not represent a fully accurate depiction of the volunteers’ daily dietary habits, and if it does, there may be other nutrition factors at play as well.

Nevertheless, while the investigation does not prove cause and effect, the association it establishes between vitamin K consumption and enlargement of the left ventricle is substantial enough that we should take note. This is not something to ignore, particularly in such young subjects since enlargements of this kind are more commonly diagnosed in older adults who have had hypertension for years and are often overweight. This condition affects the heart’s main pumping chamber and causes the heart to have to work much harder, which can eventually result in less efficient pumping and contribute to irregular heartbeat, stroke, or sudden cardiac arrest.

The finding that teens aren’t getting an adequate amount of vitamin K in their diets is not good news, considering it is supposed to be a relatively rare deficiency, but a serious one that can lead to bone weakness as well as heart problems. And vitamin K is an important nutrient that was shown in a 2015 study at Rush University Medical Center in Chicago, Illinois to help prevent the onset of dementia as we age.2 Morris, Martha Clare. “Eating Green Leafy Vegetables Keeps Mental Abilities Sharp.” Newswise. 30 March 2015. Accessed 11 October 2017. http://www.newswise.com/articles/eating-green-leafy-vegetables-keeps-mental-abilities-sharp.

Since there are many nutritious vitamin K-rich foods, it seems like a no-brainer for all of us—teens, kids, and adults alike—to start incorporating more of them into our daily menus. Shoot for 120 mcg of vitamin K every day if you’re a man and 90 mcg per day if you’re a woman. If you don’t love the leafy greens mentioned earlier, try edamame, okra, pine nuts, and grapes to up your daily quota. Since vitamin K is fat-soluble, it is more readily absorbed by the body when consumed with healthy fats. So, add some avocado slices or olive oil to your leafy greens and enjoy!

Note: the most common form of vitamin K is K1, which is present in leafy green vegetables; however, K1 is tightly bound to plant fibers and not easily absorbable.
In contrast, vitamin K2, which is found in meat, egg yolks, and dairy, is up to 10 times more bioavailable than K1 and remains active in the body for far longer. In any case, if you’re not getting enough vitamin K in your diet, it’s essential to take a K2 supplement.