Stress Risks of Watching the News 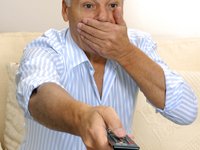 It seems a frighteningly regular occurrence these days to turn on the television and find news coverage of some type of horrible happening somewhere in the world.  Whether it is a shooting in a school, a natural disaster wiping away homes and taking lives, a terrorist bombing, or some other equally disturbing event, there will always be a media presence bringing all of the devastation right into our living rooms.  The coverage can be so compelling that it becomes hard to tear yourself away from the screen–and with a selection of 24-7 news channels, you can literally watch for hours on end with little interruption.  But new research has found that merely viewing these kinds of images for too long can actually produce more stress and anxiety in individuals than if had they been at the scene of the incident themselves.

The study, which was conducted at the University of California, Irvine, found that those people who watched many hours of coverage of a traumatic event were more likely to have elevated stress levels in the subsequent weeks than were the people who had been in the vicinity of the event as it took place.1 Castillo, Michelle. “Watching coverage of traumatic events may cause more stress than being there.” CBS News. 10 December 2013. Accessed 16 December 2013. http://www.cbsnews.com/news/watching-coverage-tramatic-events-boston-marathon-stress   The subjects were 4,675 adults who were interviewed by the researchers between two and four weeks after the bombing at the Boston Marathon in April 2013.  The questions focused on the amount of acute stress they felt as a result of the bombing, their proximity to the bombing, the length of time they spent watching coverage of the bombing on television, and whether they had experienced other traumatic events in their community.

The participants who reported watching a minimum of six hours per day of the bombing coverage had a nine times greater chance of suffering from acute stress than were those who only saw these images for approximately one hour per day.  Acute stress was defined as feeling generally anxious, nervous about particular situations, having an inability to avoid unwanted thoughts, distancing oneself from situations reminiscent of the event, and developing a sense of detachment.  The scientists theorized that it may be the intensely repetitive exposure to images of violence, destruction, and injury that initiates a primordial sort of fear response in people who are more susceptible to certain mental health issues.

This reaction is a form of “vicarious trauma,” which is a term coined in 1995 for those people experiencing stress symptoms from working closely with trauma survivors.  It is defined by a preoccupation with the traumatic events that took place, even though the individual wasn’t there.2 “Vicarious Trauma.” American Counseling Association. October 2011. Accessed 17 December 2013. http://www.counseling.org/docs/trauma-disaster/fact-sheet-9—vicarious-trauma.pdf   However, the current study appears to show that a person doesn’t need to be at the event itself or speaking face-to-face with a trauma survivor to develop this condition–immersion in the event through news watching may bring it on as well.

While viewing the media coverage of an attack such as the Boston Marathon bombing for more than six hours at a time sounds a little excessive for most people, there are instances when it is tough to break away from the constant bombardment of information on a particular event, especially if it hits close to home for some reason.  Maybe you don’t live far from the area in which it took place, have loved ones nearby, or know someone who was planning to be there.  In some cases, like the events of 9/11, the magnitude is just so overwhelming that we feel compelled to keep watching, even if it causes us to experience stress and anxiety.

But it is essential to turn of the television or computer after you’ve seen the essential information, or just change channels, even if you feel the need to check back in from time to time.  The prolonged stress that round-the-clock viewing may bring on can be very harmful to your health, physically as well as mentally.  Stress takes its toll on practically every part of the body and has been linked to heart disease, cancer, suicide, ulcers, headaches, insomnia, weight gain, and more.  Rather than getting a prescription for Xanax when you feel your stress level is starting to soar, consider a more natural approach.  For more on healthy solutions to stress, check out Jon Barron’s article, Stress & Depression.