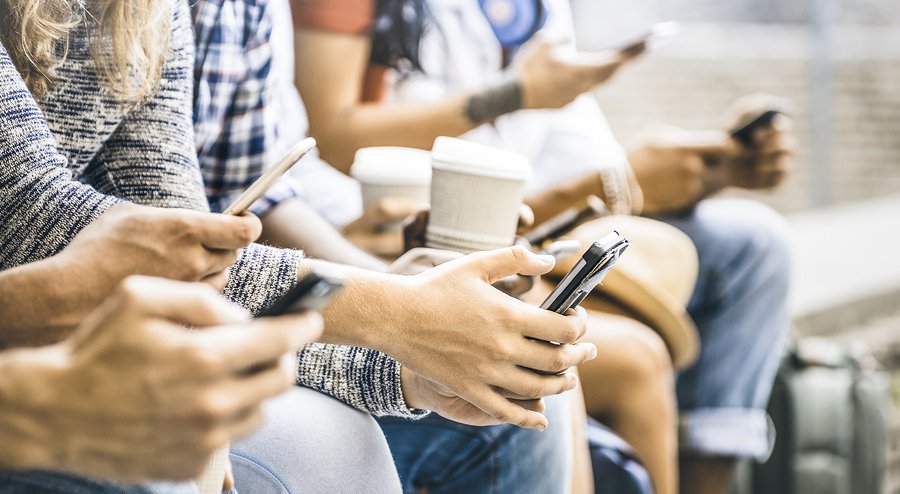 We hear much about technology addiction, and in fact, we’ve written about it several times in the past.  Why bring it up mobile phone addiction again? Because it’s altogether likely that in 10 or 20 years, there won’t be any discussion at all on the subject because all of us will be so connected to our devices that addiction will be the norm. Right now, enough of us old geezers are alive to recall the days when telephones were attached to walls and information had to be dug out of books in the library. The upcoming generation, in contrast, doesn’t remember a time when well-being wasn’t dependent on devices. It makes sense to keep writing about the extent to which technology is taking over our lives while at least some of us still marvel at the changes we’re witnessing and still wonder what physical and psychological effects those changes might provoke.

A survey by Pollfish recently reported that one out of every four adults checks his or her cell phone less than a minute after waking up.1 “Survey: 1 in 4 Adults Checks Phone Less Than a Minute After Waking Up.” Study Finds. 10 January 2019. http://www.studyfinds.org/survey-quarter-checks-phones-less-than-minute-after-waking/  This isn’t to turn off the phone alarm, but to see what’s happened overnight. Another study, this one by IDC Research, found that 80 percent of us do the checking within 15 minutes of waking.  In other words, almost all of us are going straight from the dream state to the phone.2 Pinkham, Ryan. “80% of Smartphone Users Check Their Phones Before Brushing Their Teeth…and Other Hot Topics.”

But why? It certainly seems some addictive pull must be at work to cause us to reach for the phone before doing anything else. It’s almost as if we’re in a panic to know if anyone tried to reach us, if anything new happened with our friends, if there’s pressing world news that can’t wait. Perhaps the motivator, at least in part, is something we’ve written about before—lottery brain. As we’ve described previously, “We watch the inbox hoping some miraculous good news will arrive–that we’ve been chosen for an award, recognized by an old love, forgiven by a foe–and so on. We aren’t necessarily conscious that we’re hoping for such news, but the driver is there in the background, and it causes addictive behavior, much like a gambling addiction does.”

Likewise, cell phones seduce us because they offer intermittent rewards, like slot machines. One minute there’s nothing on offer, but the next, the ding of an incoming message sounds. How seductive is that little chime? The subliminal effect is to wake up a constant hunger for more—more dings, more messages, more possibilities of something great or entertaining arriving—making the phone akin to crack cocaine for hungry brains. It’s no accident that phones have those chimes and affect us as they do. Social media developers intentionally create features designed to hook users and make them crave another hit. They know something about how particular features, such as red rather than blue notifications, affect brain chemistry and excite addictive responses.3 Karnasiewicz, Sarah. 2 February 2018. Because phones and other devices have been engineered to provoke addiction, rumor has it that many developers don’t let their own kids have them. Steve Jobs famously confessed that his children never used an iPad and that he limited access to technology at home.4 Bilton, Nick. “Steve Jobs Was a Low-Tech Parent.” 10 September 2014. The New York Times. 11 January 2019. http://www.nytimes.com/2014/09/11/fashion/steve-jobs-apple-was-a-low-tech-parent.html

Perhaps we’re vulnerable to cell phone addiction because we don’t really want to face the humdrum of the upcoming day, or maybe it’s because our brains have been building a tolerance to overstimulation and we crave ever more of it. When users reach for the phone first thing in the morning, they become immersed in distraction before they can assess what kind of mood they’re in, how their bodies feel, what the dream last night meant. Instead of naturally transitioning to the waking state, their minds go into high gear right away, finding out who sent emails, who answered emails, who posted on Facebook, what’s on the daily to-do list, what Trump tweeted last night.

And then the pattern continues throughout the day. We fill every empty moment during the day with visits to the information Disneyland, so our minds have no time to drift or dream—little opportunity for mental rest. How many times have you been to a restaurant or stood in line at a supermarket while people around you noodled with their phones? What does that do to creativity? To psychological health?

One thing seems certain: cell phone addiction is a real thing, and it’s rampant, to the point where psychologists have coined a term—nomophobia—indicating fear of being without the phone.5 Lamotte, Sandee. “Smartphone addiction could be changing your brain.” 1 December 2017. CNN. 11 January 2019. http://www.cnn.com/2017/11/30/health/smartphone-addiction-study/index.html A British survey by the company SecurEnvy determined that 66 percent of UK citizens have nomophobia. The bulk of us keep our phones with us all the time. We spend an average of 87 minutes on the phone daily Monday through Thursday and 167 minutes daily Friday and over the weekend, although some sources report much heavier use. Little of that time is devoted to talking on the phone: one-third of users spend most of their phone time texting and another third use the phone mostly for social media.  Eleven percent watch streaming media and 10 percent listen to podcasts or music.

Facebook wants to make it easier for us to spend time on our phones, even when at work, so it’s come up with a way to see incoming messages on the home screen at a glance, without having to take the time to open apps. This interface allows users to position their phones on their work desks so they can see everything that gets posted in their inbox or on social media without having to handle the phone or click through apps. Workers can stay plugged in all day without giving away the fact that they aren’t focused on their jobs.

There’s plenty of evidence that too much device time leads to depression and brain changes. A small study last year out of Seoul University in Korea found that teens addicted to their phones had an excess of GABA in their brains. According to Caglar Yildirim, a researcher who created a scale to measure cell-phone addiction, “GABA slows down the neurons. That results in poorer attention and control, which you don’t want to have because you want to stay focused. So that means you are more vulnerable to distractions.”

We’ve reported previously on research out of Loughborough University in Great Britain that determined too much time on email may lead to stress-related conditions such as hypertension, thyroid disease, heart failure, and coronary artery disease. And of course, there are other hazards to overuse of cell phones, including exposure to radiation and possibly heightened risk of resulting cancer, traffic accidents when used when driving, repetitive use injuries, decline in communication skills, sexual dysfunction, sleep deprivation and heightened anxiety.6 Garfield, Leanna. “Checking your phone first thing in the morning could be making you unhappy.”Business Insider. 11 January 2019. https: //www.businessinsider.com/why-you-shouldnt-check-your-phone-first-thing-in-the-morning-2016-57 “15 Recent Discoveries from Phone Addiction Studies.” 26 February 2015. Addiction Tips. http://www.addictiontips.net/phone-addiction/phone-addiction-study/ A recent CDC study correlates heavy teen use of cell phones with increased suicide rates.8 Walton, Alice G. “Phone Addiction is Real—and So Are its Mental Health Risks.” 11 December 2017. Forbes. 11 January 2019. http://www.forbes.com/sites/alicegwalton/2017/12/11/phone-addiction-is-real-and-so-are-its-mental-health-risks/#6da1418d13df

You can assess your own level of addiction by taking the inventory here. If you find that you’re among the majority of folks who overuse your phone, you might want to track your daily use with an app called “Checky.” Yes, it’s sort of contradictory to rely on an app for this purpose, but knowing how many times you consult your phone each day might provide an eye-opening reality check and might help you to back off. Experts also suggest turning off notifications, removing social media apps from the phone, prohibiting the phone from the bathroom and bedroom, getting an actual alarm clock instead of relying on your phone, and if all else fails, going to a therapist who employs cognitive behavioral therapy (CBD), an approach that has a good addiction-busting track record.9 Kylstra, Carolyn. “22 Ways to Break Up with Your Cell Phone.” 22 December 2014. Buzzfeed. 11 January 2019. http://www.buzzfeed.com/carolynkylstra/cell-phone-detox