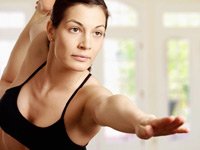 When you need to really focus your mental abilities before a test or an important meeting, consider taking a few minutes to prepare yourself.  But instead of going over your notes one last time, try immersing yourself in some yoga poses.  According to recent research, doing just 20 minutes of hatha yoga (yoga postures) can improve brain function and concentration abilities.

The study, which took place at the University of Illinois at Urbana-Champaign, found that even a brief, 20-minute session of hatha yoga can reap benefits to cognitive function in several important areas.1 “Doing yoga for 20 minutes improves focus and brain function: study.” New York Daily News. 7 June 2013. Accessed 9 June 2013. http://www.nydailynews.com/life-style/health/yoga-20-minutes-boosts-brain-function-study-article-1.1366274   The subjects were 30 adults, who were split into two random groups.  One group was led in a single hatha yoga class for 20 minutes.  The other group had a cardiovascular workout on a treadmill, walking briskly or jogging for 20 minutes.  When their exercise sessions were over, all of the participants were tested on concepts of working memory and inhibitory control.  Working memory is a form of short-term storage and recall of information in the brain.2 Baddeley, A. “Working Memory.” National Institutes of Health. 31 January 1992. Accessed 10 June 2013. http://www.ncbi.nlm.nih.gov/pubmed/1736359   Inhibitory control is an important aspect of placing attention on what is relevant to a task while ignoring the irrelevant.3 Richardson, Thomas Hugh. “Inhibitory Control in Psychiatric Disorders–A Review of Neuropsychological and Neuroimaging Research.” Kon. Accessed 10 June 2013. http://www.kon.org/urc/v7/richardson3.html   Both of these areas focus on concentration and the retention and retrieval of newly learned items.

Those volunteers in the yoga group completed their tests more rapidly and were significantly more accurate than those in the treadmill group.  Their mental focus was better, data was processed at a quicker rate, and a higher level of precision was achieved among the yoga practitioners.  In every area in which they were tested, including learning, preserving data, and adding information to the knowledge that they had already attained, the yoga group performed considerably better when compared to the treadmill group.

This is particularly interesting, since earlier studies have shown that a treadmill workout in which the subject sustains 60 to 70 percent of their maximum heart rate (as was achieved in this research) increases performance in tests of brain function.4 Hillman, Charles H., et al. “The Effect of Acute Treadmill Walking on Cognitive Control and Academic Achievement in Preadolesent Children.” National Institutes of Health. 31 March 2010.  Accessed 10 June 2013. http://www.ncbi.nlm.nih.gov/pmc/articles/PMC2667807   In the current study, the treadmill exercisers did not show any perceptible improvement in cognitive abilities.  While this research only used a very small population sample, it would appear that yoga may provide a bigger brain boost than treadmill exercise.  Another possibility is that the two forms of exercise benefit different areas of the brain, so you might not want skip your cardio workout altogether.

If you would like to add yoga to your fitness and exercise routine, hatha yoga is a terrific physical form of the practice.  In addition to a variety of poses designed to strengthen and stretch different parts of the body, hatha yoga also helps its practitioners develop balance.  Another essential aspect of the practice is breathing control and meditation that teaches mindfulness and promotes greater attention.5 “Hatha Yoga.” Sanatan Society. Accessed 10 June 2013. http://www.sanatansociety.org/yoga_and_meditation/hatha_yoga.htm   It is entirely possible that the mental focus required by practitioners is what improves the individual’s cognitive abilities.  When doing yoga poses, you have to focus on what you’re doing. When working out on a treadmill, people often watch TV or listen to music specifically so they do not have to focus on what they’re doing.

Considering that in this research, the participants only did yoga one time for just 20 minutes, it is amazing that they still managed to gain increases in brain function.  Since these yoga novices were just learning the techniques of mindfulness and meditation, it makes you wonder what would happen if the same tests were given to dedicated yogis who have been performing this practice every day for many years.  It would certainly be interesting to have follow-up research performed that focuses on the mechanics of just how yoga can benefit the brain in a single session.

Yoga has been found to be good for the body in a number of other ways as well.  A 2012 study at Roudebush Veterans Administration Medical Center and Indiana University in Indianapolis, found that yoga improves balance in the elderly and those who have had a stroke.6 “Yoga may help stroke survivors improve balance.” American Heart Association. 26 July 2012. Accessed 10 June 2013. http://newsroom.heart.org/news/yoga-may-help-stroke-survivors-236741   And since yoga increases muscle strength, flexibility, and balance, it can help arthritis sufferers manage the daily pain they often experience.  Yoga is a workout that promotes our health both mentally and physically, so maybe it’s time to give it a try if you are not already a practitioner.