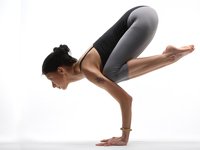 The effects of a stroke can be devastating, both to mental and physical capabilities.  Those who experience a stroke may lose their ability to speak clearly or at all, certain analytical functions, depth and distance perception, and their use of one or more limbs.1  And strokes are now occurring in younger people more frequently than ever before, due to risk factors such as diabetes, high blood pressure, and obesity being on the rise.2  However, there is some good news for stroke victims in the form of yoga therapy that appears to help a stroke victim regain some lost abilities.

According to a recent study that took place at Roudebush Veterans Administration Medical Center and Indiana University in Indianapolis, yoga exercise can improve balance, an essential ability that may be diminished by stroke as well as with age.3  The researchers worked with a pool of 47 stroke victims — 75 percent of whom were male veterans.  Ten of these volunteers were used as a control group and were provided typical medical care with no yoga.  The remaining 37 were placed in one of two yoga groups.  The first group participated in yoga exercise twice a week, and the second group had yoga exercise twice a week along with listening to relaxation recordings three times each week.

During the eight-week course of the research, the subjects were taught a variety of increasingly more complicated poses in floor-based, sitting, and eventually standing positions. Those in both yoga therapy groups had measurable improvements to their balance compared to the control group. Although many of these older men were initially skeptical of any potential benefits of yoga, they began to take more of an interest in this form of therapy as its effects became noticeable.  The difference was quantifiable too: the volunteers doing yoga were tested for balance in standing, standing with their eyes closed, and standing with legs together while turning in a 360 degree circle and they performed significantly better than their peers in the control group. Then again, this would hardly be a surprise to any of you who read Jon Barron’s 2007 report on exercise in which he said, “Many yoga poses are specifically designed as balance poses, utilizing arms, legs, hips — the entire body, in fact.”

As an important note, all of the study participants had their strokes more than six months prior to the start of the experiment.  That was a key element in this research, since it was a long-held medical belief that any progress that would be made toward recovery after a stroke must take place within the first three to six months after the event.  This study confirms other findings that have shown the possibility of making improvements even more than a year after a stroke has occurred.4  It also stands to reason that it will keep patients in better spirits and more positive toward treatment if they feel that there is a potential to continue getting better if they see results from their therapy.

And balance is an important area in which to improve.  Falling is a serious problem among those with stroke-related disabilities.  In fact, the researchers state that close to 75 percent of stroke survivors are prone to falling.  This can cause severe injuries or even death in some cases.  Plus, fear of falling may limit a person in his or her activities, which in turn can lead to isolation and depression.  All of which are already problems for many senior citizens, but are easily and quickly compounded after a life-altering health scare such as a stroke.

Yoga can better your sense of balance by enhancing your self-perception and mindfulness of your own body.5  You become more aware of all muscle movements as they are necessary to achieve and maintain each pose. In addition, it also increases your flexibility and the range of motion of your muscles.  Yoga is a terrific addition to a daily exercise routine for people of any age.  Beginning yoga is a non-competitive, great place to start if you have not been working out for some time.  However, don’t forget that it is just one aspect of exercise that needs to be incorporated into a well-rounded plan.  Cardiovascular workouts, interval training, strength training, and stretching will all work together with yoga to help you achieve not only better balance, but better overall health for the long term. Again, check out Jon Barron’s 2007 newsletter on exercise. And be sure and check out Jon’s simple chair exercise for improving balance in the same report.