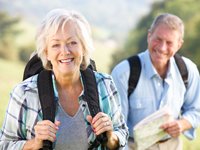 For those unlucky enough to develop kidney stones, the discomfort is quite intense.  Severe waves of pain, vomiting, urine that may turn pink or red from blood–it’s enough to send grown men and women to the Emergency Room in the middle of the night. Some even compare passing a stone unfavorably to natural childbirth.  But now there is potentially good news for people who wish never to deal with kidney stones again.  New research has discovered that simply adding some light exercise to an individual’s weekly routine may help prevent the formation of stones.

The study, which took place at the University of Washington School of Medicine in Seattle, found that walking for approximately three hours per week or jogging for just an hour a week may lower the chance of kidney stones forming by as much as 31 percent.1 Dallas, Mary Elizabeth. “Light Exercise Might Reduce Risk of Kidney Stones.” WebMD. 13 December 2013. Accessed 18 December 2013. http://www.webmd.com/kidney-stones/news/20131213/light-exercise-might-reduce-risk-of-kidney-stones   The subjects were more than 84,000 postmenopausal women who were part of the Women’s Health Initiative, an extensive 15-year study undertaken by the National Institutes of Health.2 “WHI Background and Overview.” National Institutes of Health. Accessed 20 December 2013. http://www.nhlbi.nih.gov/whi/background.htm   The scientists conducting the current research evaluated the women’s medical records from 1993 through 1998, with an average of eight years of follow-up, as well as information each participant provided about their typical diet and exercise levels.

The researchers determined that basically any kind of fitness and exercise performed every week acted as a deterrent to the formation of kidney stones.  They suggested that even something that burns relatively few calories, such as gardening, may help some women lower their risk of developing stones.  According to these findings, the decreased risk had little to do with the intensity of the physical activity; just getting the body moving in some way for a few hours over the course of a week was enough to make a substantial difference.

The fitness and exercise factor may also be important because another finding from this study was that obesity is a risk factor for having kidney stones.  The researchers found that consumption of more than 2,200 calories per day raises the likelihood of developing kidney stones by approximately 42 percent.  Those subjects who had a body-mass index of 30 or more, which is considered obese, had a greater chance of suffering from stones than did the women with a BMI in the normal range.

While the size of the population sample used in the study lends credence to the results, the limited scope of the segment of the population included (postmenopausal women) makes it much harder to prove that it will translate definitively for everyone else.  We don’t know if more physical activity will lower the risk of kidney stones for younger women or men, or whether light exercise is enough to make a difference for other people.  However, what we do know is that physical activity is beneficial to all people of every age, whether they have ever endured a kidney stone or not, and should be incorporated into everyone’s daily routine in any case.

In addition, since obesity was also strongly associated with having kidney stones, it would stand to reason that not only increasing exercise but also improving one’s diet would make sense. Since kidney stones are known to form when calcium, phosphorus, and oxalate are highly concentrated in the urine, there appear to be foods that encourage the development of stones. Dietary changes are part of the present medical regimen for treating kidney stones, and for those with the condition it’s recommended to drink a greater amount of fluids, consume approximately 800 mg of calcium daily (being careful not to overdo it3 John Schieszer. “Calcium and Vitamin D Supplements May Increase Stone Risk.” June 29, 2012. “Calcium and Vitamin D Supplements May Increase Stone Risk.” Renal & Urology News. (Accessed 21 Dec 2013.)  http://www.renalandurologynews.com/calcium-and-vitamin-d-supplements-may-increase-stone-risk/article/248160/ ), reduce sodium and dietary oxalate levels, and eat only moderate portions of protein.

This is all good advice, but it also pays to drink your water in small quantities throughout the day rather than in a couple of sittings, as that can overburden your already troubled kidneys.  And try an herbal kidney cleanse formula on a regular basis to prevent the build up of stones in the first place and help quickly dissolve any that do form.  The one thing you probably will want a second opinion on is whether or not to let your doctor perform surgery to extract the stones. According to a study at the University of Michigan in 2009, such surgeries have increased in popularity tremendously as urologists have opened ambulatory surgery centers. But the primary driving force for the increase seems to be financial, since in many cases the procedure is totally unnecessary…according to the peer reviewed research.4 Hollingsworth, John M.; et al. “Urologist Ownership of Ambulatory Surgery Centers and Urinary Stone Surgery Use.” Health Services Research. August 2009.  Accessed 20 December 2013. http://www.ncbi.nlm.nih.gov/pmc/articles/PMC2739033

Click the link for information on our kidney detox.