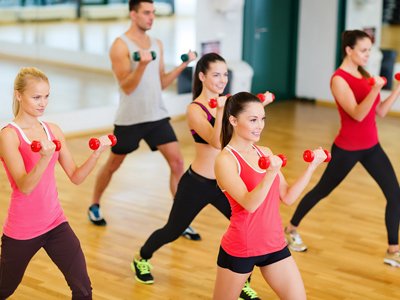 In spite of the stench of sweating bodies and the irritation of thumping music mixed with grunting noises emitted by Neanderthal-looking weightlifters, many of us go to the gym regularly hoping to get healthy. Sure, we could exercise outside instead-we could jog on the streets -but we choose the gym to dodge heat in summer and ice in winter, to avoid inhaling carbon monoxide fumes from passing cars, to elude exposure to ambient industrial pollution. We go to the gym because it appears to be a safe place to exercise.

But safety at the gym, it seems, is just an illusion. Several years ago, the news was filled with stories about germs being spread at gyms by sick individuals who left their bacteria on exercise machines for the next user to acquire, not to mention the germs passed around on team sport equipment. Now, new research tells us that the air inside of the gym might not be any better than the air on the traffic-filled street outside. Gyms, in fact, have very high levels of indoor pollution.1 Reynolds, Gretchen. “The Bad Air in Our Gyms.” 5 November 2014. The New York Times. 7 November 2014. http://well.blogs.nytimes.com/2014/11/05/the-bad-air-in-our-gyms

The research, just published in the journal Building and Environment, comes out of the University of Lisbon in Portugal and the Technical University of Delft in Holland.2 Ramos, C.A., Wolterbeek, H.T., and Almeida, S.M. “Exposure to indoor air pollutants during physical activity in fitness centers.” December 2014, Volume 82. Building and Environment. November 2014. http://www.sciencedirect.com/science/article/pii/S03601323140028567 The scientists placed air quality monitors in weight rooms and exercise areas in 11 gyms and took measurements of pollution levels during the most crowded hours. The machines were set to measure amounts of common contaminants such as carbon monoxide, carbon dioxide, ozone, various chemicals, and dust.

After gathering the initial data, the researchers selected three gyms where they let the monitors run round the clock to collect more in-depth data. The results were shocking, especially because of the high levels of formaldehyde recorded. There were also very high levels of carbon dioxide and dust. In fact, in all cases, the level of these pollutants significantly exceeded the European standards for healthy indoor air.

It’s certainly disturbing to think that while you’re controlling your breathing in a downward dog yoga pose, your nostrils might be filling with noxious formaldehyde. Where does the formaldehyde come from? As it turns out, it’s a common component in both building materials and furniture. The composite wood used in building construction contains formaldehyde. So do many fabrics, cleaners, carpets, and hair products. When stirred up by use or moisture, formaldehyde releases into the air.3 “Formaldehyde in pressed wood products safety data sheet.” 7 November 2014. http://www.nicnas.gov.au/communications/publications/information-sheets/existing-chemical-info-sheets/formaldehyde-in-pressed-wood-products-safety-factsheet Given the level of intensive use gyms get, the sweat generated that keeps moisture in the air, and the high levels of traffic, it makes some sense that formaldehyde fumes would be thick in the fitness center. It doesn’t help that most gyms lack windows that open to the outside so any noxious chemicals continue to circulate through the ventilation system.

Formaldehyde exposure can cause minor health issues such as cough, sore throat, itchy eyes, nausea, or even nosebleeds.4 “What You Should Know About Formaldehyde.” CDC. 7 November 2014. http://www.cdc.gov/nceh/drywall/docs/whatyoushouldknowaboutformaldehyde.pdf Studies show that it also can cause certain cancers, including leukemia, lung cancer, and cancer of the nasal passages.5 “Formaldehyde and Cancer Risk.” National Cancer Institute. 7 November 2014. http://www.cancer.gov/cancertopics/factsheet/Risk/formaldehyde Elderly people and young children are particularly sensitive to the effects. If you have ever emerged from your workout feeling sick, it might be because the levels of formaldehyde in your beloved gym exceed safe standards.

As for dust, it can cause more mischief than mere sneezes because airborne particles of noxious chemicals attach themselves to the dust. Also, dust can provoke asthma attacks. And carbon dioxide is problematic because when inhaled in excess, it can cause general “spaciness” and exhaustion, which basically defeats the purpose of going to the gym.

The worst readings were taken during exercise classes, and particularly aerobics classes, when everyone’s breath adds to the carbon dioxide overload. The researchers blame the fact that there are so many bodies packed into a small space at once, producing moisture and stirring things up. It’s also disturbing to note not only that the levels of pollutants in gyms seem to be so high, but also, that we breathe in more of them while working out than we might under other circumstances.

“When we exercise, we take in more air with each breath and most of that air goes through the mouth, bypassing the natural filtration system in the nostrils,” said chief investigator Carla Ramos. “The pollutants go deeper into the lungs compared to resting situations.”

Does this mean you should stop exercising in gyms and take to the streets? Not necessarily, given that breathing automobile fumes comes with its own set of problems, but it pays to pay attention. Does your gym smell like chemicals? If so, find out what cleaning products are in use and request a switch to all-natural products. Find out if windows can be opened. Choose less crowded classes. If you can’t remedy your current gym situation, try to find another gym with better air circulation. And no matter what gym you select, remember to avoid touching your eyes, nose, and mouth while exercising and wash your hands after working out to avoid bacterial infection. The bottom line, though, is keep working out. The slight risks you face from potential formaldehyde exposure pale next to the risks you’ll incur if you sit on your butt worrying about toxins, forgoing fitness.