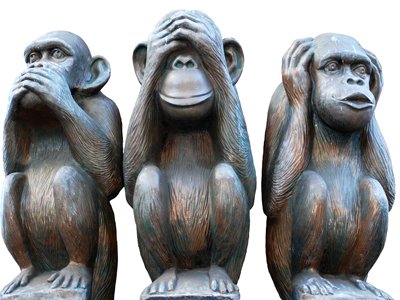 Joseph Heller wrote in Catch-22 that just because you’re paranoid doesn’t mean they’re not out to get you.

This week, a news item appreared declaring that almost half of all Americans believe in medical conspiracies. Among the “wild beliefs” the conspiracy theorists ascribe to, according to the press, are the possibility of a link between vaccines and autism, the repression of access to  natural cures for cancer, and a potential link between cellphones and cancer. The headlines make no bones about their point-of-view: “We’re a nation of medical conspiracy nuts,” says the Chicago Sun-Times as well as Salon.1 Williams, Mary Elizabeth. “We’re a nation of medical conspiracy nuts.” 19 March 2014. Chicago Sun-Times. 20 March 2014. http://www.suntimes.com/news/otherviews/26309414-452/were-a-nation-of-medical-conspiracy-nuts.html And, the study’s author, J Eric Oliver from the University of Chicago, has been widely quoted as saying that people latch onto conspiracy-thinking because “For people who don’t have a lot of education, it’s relatively easy to reject the scientific way of thinking about things.” In other words, we’re too stupid to understand what the doctors know.

Apparently, the medical community is banking on that same public dumbness when it comes to statins. Those who are prone to conspiracy-think might be interested to know that new guidelines proposed by the American Heart Association and the American College of Cardiology would have 87 percent of all men between the ages of 60-75 on statins, and 53 percent of all women in the same age group.2 Knox, Richard. “Cholesterol Guidelines Could Mean Statins for Half of Adults Over 40.” 20 March 2014. Washington Post. 20 March 2014. http://www.washingtonpost.com/national/health-science/cholesterol-guidelines-could-mean-statins-for-half-of-adults-over-40/2014/03/20/ff5c6944-b047-11e3-b8b3-44b1d1cd4c1f_story.html Given the extraordinary profits such enrollment would net for the pharmaceutical industry, one might at least raise an eyebrow. We’re talking about 12.8 million more people on statins than the 43.2 million Americans already on the drugs.

Here’s the confounding factor. The press seems to have forgotten that just a few years ago, the headlines blasted the announcement that studies had found that cholesterol medications do virtually nothing to improve cardiovascular risk for most people–at least among those who have not already had at least one heart attack.

Those former reports about statins were based on several mega-studies on which we reported. The most recent study, reported in the Archives of Internal Medicine, consisted of a meta-study of “11 trials including 65,229 persons with 244,000 person-years of follow-up in healthy (normal cholesterol levels) but high-risk men and women.” The report concluded that there was no reduction in mortality when treated with statins. Those results corroborate an earlier, 2011 study from the Cochrane Review which also found no benefit to high-risk individuals. Ironically, it is just this group–those with normal cholesterol levels and no current heart disease, but other risk factors–that the new guidelines target.

According to the new guidelines, everyone who fits into one of four categories should be on the drugs. The first category includes those who already have heart disease–not necessarily those who have had a heart attack, just those who have a compromised cardiovascular system. Next comes those whose “bad” cholesterol, or LDL, is over 190. Third are people with diabetes. And the final category–and by far the largest group–includes anyone, regardless of cholesterol levels or current health, who has a 7.5 percent or greater risk of developing heart disease within 10 years. The risk factors included in the calculation are smoking and hypertension, as well as a family history of heart disease, age, and being overweight.

There is so much wrong with this idea that it’s hard to know where to begin criticizing it. For instance, it takes it as a given  that if your parents or other relatives had heart disease, you absolutely also will develop heart disease within 10 years, even if you’re completely healthy now, show no evidence of any cardiovascular issues, and you lead an exemplary lifestyle. That’s especially true if you’re over the age of 60. It should be mentioned that a 7.5 percent risk factor is not particularly high–certainly not high enough to warrant going on drugs that have significant side effects. The recommendation also assumes that giving statins for many years to such healthy individuals will exert a prophylactic effect, and as stated above, significant studies show otherwise.  And finally, it assumes that the best way to prevent cardiac events is to force down cholesterol levels, a mistaken notion that we’ve discussed at length before.

Those who favor prescribing statins for all argue that studies, in fact, show the drugs save lives. They project that putting the healthy majority on statins will prevent 475,000 heart events annually. But as the Cochrane Review noted in its report, all of studies showing that statins save lives were funded by the pharmaceutical industry, except for one. As we’ve discussed in the past, those studies stretch the numbers to make it look like statins do far more good than they actually do. In fact, on close analysis, one of the more significant industry-sponsored studies reveals that Lipitor only prevents one heart attack per 100 users.

Advocates of the new guidelines sing about how cheap the drugs are–some brands as little as 50 cents a day for the consumer–so why not put everyone on them? Study director Michael Pencina of Duke University says that in the end, the cost of taking statins for a lifetime is less than the cost of treating heart attacks. But the small outlay of cash on the part of consumers would add up to huge profits for the pharmaceutical companies, bringing in an extra $2 to $6.6 billion in revenue annually. And let’s keep in mind that there are serious side effects associated with statins.

At least not all in the medical community is rallying behind the recommendations. In fact, there’s been a lot of criticism. An article in the Harvard Lancet by cardiologist Dr. Paul M. Ridker and epidemiologist Dr. Nancy Cook stated that the risk calculator could be overstating risk by as much as 150 percent.3 Jaslow, Ryan. “Experts question risk calculator released with new cholesterol guidelines.” 19 March 2014. CBS News. http://www.cbsnews.com/news/experts-question-risk-calculator-released-with-new-cholesterol-guidelines/ “Miscalibration to this extent should be reconciled and addressed before these new prediction models are widely implemented,” they wrote.  “If real, such systematic overestimation of risk will lead to considerable over-prescription.”

That argument still assumes that statins should be a first-line solution for those with certain risk factors, but not everyone agrees even with that stance. At least some point to the significant side effects statins can bring–including cognitive impairment, muscle pain, liver damage, and a significantly increased risk of developing diabetes. Well, at least if the statins gave you diabetes, you’d now qualify under category 3–people with diabetes–for being prescribed the drugs in the first place. How fortunate!

“If our goal is to help people feel better, live longer, and have less heart disease, putting millions more on statins is not going to do that,” says cardiologist Rita Redberg, M.D., of the University of California, San Francisco. She asserts that lifestyle and dietary changes should be the foundation of a heart-healthy prescription–not wanton distribution of potentially harmful drugs of dubious benefit.

In any event, the statin campaign is one the conspiracy theorists can add to their arsenal. And if we don’t want to call it a conspiracy, then perhaps the Chicago Sun-Times and study’s author, J Eric Oliver can at least agree that we can ascribe it to something far more pedestrian: arrogant, unconscionable greed.