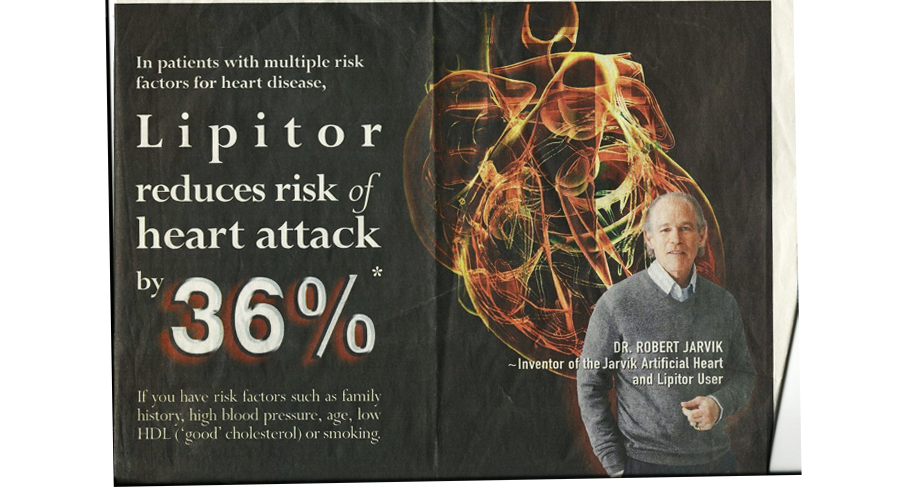 The TV commercials make it look like taking Lipitor almost guarantees a romantic, long, and healthy life — and in America, millions of people have been sold. In fact, over 13 million Americans take cholesterol-lowering meds, otherwise known as “statins,” daily. The story goes that by taking these pills, you’ll reduce bad cholesterol, and thus, reduce your chances of dying from heart failure.

And yes, the drugs do, in fact, lower cholesterol. Unfortunately, though, research shows that lowering cholesterol usually doesn’t necessarily lower heart-attack risk. According to previously unreleased data based on a study sponsored by Merck and Schering-Plough and published by the BMJ, after several years on two types of cholesterol-lowering medications, patients reduced their cholesterol level, but they reaped no significant health benefit at all unless they already had heart disease.1 Lenzer J. “Unreported cholesterol drug data released by company.” BMJ. 2008;336(7637):180-181. https://www.ncbi.nlm.nih.gov/pmc/articles/PMC2213854/

The scariest part is that those tainted figures, as pathetic as they are, are probably rosier than reality, given that they come from an industry-sponsored study with a vested interest in proving that their product works. In fact, a parallel study sponsored by the government found taking statins results in no statistically significant health benefit whatsoever in those without preexisting heart disease. And despite the lack of scientific support, the guidelines keep getting lower and lower for shuttling patients into statin prescriptions, tripling the numbers since 2001.

Ironically, while the drug companies seem to be utter geniuses in the money-making department (cholesterol-lowering meds reaped profits of almost $28 billion in 2006 alone, making them the best-selling drugs in history), they apparently can’t master the basic science of what actually causes heart disease. It ain’t cholesterol! Hearken back to an article I wrote in 2004, in which I explain that cholesterol doesn’t cause plaque to accumulate on the walls of arteries — the main argument among those who insist we lower cholesterol lest we keel over from heart failure. If it did, it would also cause plaque to build up in your veins — but it doesn’t.

In fact, cholesterol’s role is to repair damaged arteries by cementing over damaged or inflamed areas. The damage comes from inflammation, acid build up in the muscle tissue surrounding your arteries, an excessive build up of Omega-6 fatty acids in the blood, high homocystein levels, and free radical damage. In other words, cholesterol doesn’t cause the damage to the arteries; it repairs it. This doesn’t mean that cholesterol is blameless. An excess of cholesterol thickens the blood and indicates other problems, such as liver damage — but it isn’t the culprit it’s been cracked up to be, and reducing cholesterol doesn’t solve the problems it’s supposed to solve.

The drug-makers cry foul at the critics who say they’re overselling medications that don’t work. They claim that a three-to-five year trial run of cholesterol drugs isn’t long enough — that it takes 20 years or so for the real benefits to show up. And they also tout the fact that if the meds save one person per 100, that adds up to a whopping 1000 people per million — which, according to industry logic, justifies the other 999,000 who take it without reaping any benefit.

And they might have a point if it weren’t for the side effects — including nausea, trouble swallowing, muscle aches, vertigo, severe neuromuscular degeneration similar to multiple sclerosis, memory loss, trouble talking, and nerve damage. In fact, there have enough complaints about side effects to bring about a number of lawsuits. Plus, there’s all that money down the drain for those unlucky 99 percent of users who don’t gain protection but pay the hefty bill for the drug anyway (online discount pharmacies list the per-pill price at around $2.33 for a 30 mg. tab; with far higher prices in the store). And even if you don’t pay for the drugs directly, you pay in the form of higher insurance premiums — whether or not you don’t even use the drugs yourself.

Meanwhile, there are lots of ways to increase heart health and even to reduce cholesterol without supporting the pharmaceutical magnates. Change your diet, improve your Omega-3 to Omega-6 fatty acid ratio, optimize your liver function, take antioxidant supplements to heal arterial damage and proteolytic enzymes to reduce inflammation and clear plaque from your arteries, take methylating vitamins to reduce homcystein levels, or try supplementing with niacin and policosanol. And keep in mind that even though a 2006 study found that taking statin medications may add a maximum of 3.5 years of life to those with heart problems, going to church regularly produced pretty much the same results. But it also found that regular physical exercise added up to five years — and for a whole lot less money!