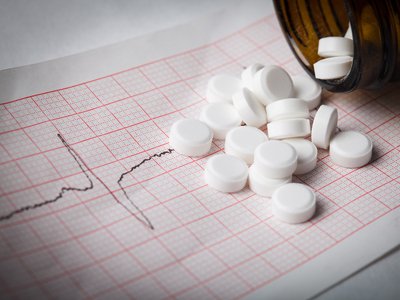 Back in grade school, most of us learned that “a body at rest tends to stay at rest.” The law of inertia, of course, applies to the material world, but it also seems to rule thinking in the medical domain. When it comes to abandoning an accustomed practice, doctors often resist, even if evidence indicates that the practice is useless, or worse, harmful. Take, for example, the practice of prescribing a daily aspirin to patients at risk for cardiovascular problems.

This week, in a miracle turnaround, the Food and Drug Administration withdrew its recommendation that all at-risk patients should take an aspirin a day.1 “Can an Aspirin a Day Help Prevent Heart Attacks?” FDA. 8 May 2014. http://www.fda.gov/ForConsumers/ConsumerUpdates/ucm390539.htm The Agency issued a statement saying, “The FDA has reviewed the available data and does not believe the evidence supports the general use of aspirin for primary prevention of a heart attack or stroke.”  The Agency further noted that, “there are serious risks associated with the use of aspirin, including increased risk of bleeding in the stomach and brain.” Sounds like a good reason to stop the wanton prescribing of the stuff.

Even in the case of those who have already suffered from a coronary event, the FDA showed some restraint. “The bottom line is that in people who have had a heart attack, stroke or cardiovascular problems, daily aspirin therapy is worth considering,” the Update says. “And if you’re thinking of using aspirin therapy, you should first talk to your health care professional to get an informed opinion.”

Now here’s where the law of inertia comes into play. Some in the medical field who have been prescribing aspirin since the 1990’s see no reason to stop. The American Heart Association, for instance, still insists that all people over the age of 50 who have at least two risk factors for heart disease should go on the daily aspirin regimen.2 Blanchard, Vanessa. “FDA creates controversy, says not everyone should take aspirin to prevent heart disease.” 7 May 2014. Daily Digest News. 8 May 2014..http://dailydigestnews.com/2014/05/fda-creates-controversy-says-not-everyone-should-take-asprin-to-prevent-heart-disease/ Major risk factors, according to the AHA, include being male, over 65, having a family history of heart disease, being a smoker, being inactive, having hypertension, diabetes, high cholesterol, obesity, or being African American, Mexican-American, Hawaiian, or Native American.3 “Understand Your Risk of Heart Attack.” The American Heart Association. 8 May 2014. http://www.heart.org/HEARTORG/Conditions/HeartAttack/UnderstandYourRiskofHeartAttack/Understand-Your-Risk-of-Heart-Attack_UCM_002040_Article.jsp That means that according to the AHA guidelines, all African American men over 65 should be on daily dose of aspirin, no matter their health status, providing the doctor concurs. The same would go for all inactive people with high cholesterol, old or young.  The American Diabetes Association agrees with this assessment.

Also on board, to some extent, is the US Preventative Services Task Force, a group comprised of primary care physicians. The Task Force recommends that all men over the age of 45 and all women over the age of 55 go on the aspirin regimen to prevent a first heart attack, as long as their doctor agrees that the benefits will outweigh the risks. It seems that many doctors don’t worry much about the damage aspirin might do unless the patient already has ulcers or bleeding problems, given that all these major medical organizations have endorsed continued use of aspirin. Nor are they particularly concerned that the evidence as to aspirin’s efficacy is somewhat dicey at best. This fact is underlined by a statement made by Dr. JoAnn Manson, head of preventive medicine at Brigham and Women’s Hospital in Boston. “I don’t think the FDA’s views override the guidelines of these professional medical societies,” she says.4 Kotz, Deborah. “Conflicting advice on taking aspirin to prevent heart disease.” 7 May 2014. The Boston Globe. 8 May 2014. http://www.bostonglobe.com/lifestyle/health-wellness/2014/05/07/conflicting-advice-whether-take-aspirin-prevent-heart-disease/EbpYaHBmA8We7WGJ9ZloJN/story.html

What triggered this unusual situation in which the FDA ends up sounding almost like (gasp) an alternative health organization compared to the medical mainstream?  It all started when Bayer Healthcare petitioned the FDA to change labels on their aspirin bottles to include a message indicating that aspirin can be used to prevent heart attacks. First the label change got shot down, and then the FDA decided to revisit the whole topic of aspirin as a heart attack and stroke preventative.

Here’s the thing, though. The entire debate about whether it makes sense to take aspirin as a prophylactic measure is predicated on the “idea” that aspirin can, in fact, prevent fatal heart attacks. The FDA says that the cost is too high for the benefits reaped, although it also says that “it’s worth considering” for those with a history of stroke or heart problems.  But as Jon Barron pointed out in a newsletter a few years ago, “Studies have shown that long-term daily use of low-dose aspirin may indeed lower the risk of having “second” heart attacks and strokes caused by blockages, but it does not appear to reduce the risk of dying from these problems.”

That same article quotes a Dr. James Howenstine who says, “Four early studies using aspirin to prevent heart attacks had shown no benefit (British Medical Journal 1974 vol. 1 p. 436, Lancet Vol. 2 p. 1313, R. Levy JAMA Feb 15, 1980, R. Peto British Medical Journal 1988 vol. 296 pg. 313-6). Then along came a study on U.S. physicians which used Bufferin (aspirin and magnesium). This study showed no reduction in fatal heart attacks and no improvement in survival rate but there was a 40 % decrease in the number of non-fatal heart attacks. The magnesium was ignored and there was a prompt extensive institution of aspirin for prevention of heart attacks.”

The fact is that there are alternatives to aspirin for cardiovascular fitness. The most promising, according to Jon Barron, would be proteolytic enzymes. Garlic has also been shown to be a powerful anti-clotting agent. In fact, a 1997 study comparing garlic and aspirin found that garlic was comparable to aspirin in preventing thrombosis.5 El Sabban, Farouk. “INFLUENCE OF GARLIC COMPARED TO ASPIRIN ON INDUCED PHOTOTHROMBOSIS IN MOUSE PIAL MICROVESSELS, IN VIVO.” 15 October 1997. Thrombosis Research. 9 May 2014. http://www.sciencedirect.com/science/article/pii/S0049384897002302   Turmeric, ginger, and bromelain also can be helpful. And of course, nothing can beat eating well, exercising, and keeping a positive attitude for prevention.