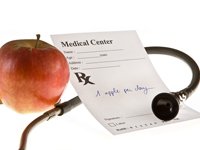 “An apple a day keeps the doctor away” is an old proverb that many a parent has used throughout the past few centuries to promote a healthy immune system and to remind their offspring to eat well.  A team of scientists recently decided to put the saying to the test by literally comparing the risks and benefits of eating an apple a day with taking statin medications daily to lower the risks of stroke and heart attacks.  And guess what?  The apples came out on top.

The study, which was conducted through the British Heart Foundation Health Promotion Research Group at Oxford University in England, found that eating an apple a day is great for natural heart health and may be more effective at balancing the prevention of cardiovascular disease with the deaths that may result from eating them than the pharmaceutical drugs that are most often relied on.1 Castillo, Michelle. “Apple a day may keep heart attacks, stroke at bay.” CBS News. 18 December 2013. Accessed 21 December 2013. http://www.cbsnews.com/news/apple-a-day-may-keep-heart-attacks-stroke-at-bay   The researchers focused on men and women over the age of 50 and living in the United Kingdom.  They devised a mathematical model based on the amount of individuals in this particular segment of the population and the number of them considered at high risk for a heart attack or stroke.

The trial was set up to determine an estimate of how far the mortality rate caused by these cardiovascular events would fall if patients who were not already taking a statin were prescribed this drug to take on a daily basis.  The assumption was that 17.6 million more citizens over 50 across the U.K. would be taking a statin, counting on a 70 percent rate of compliance since not everyone follows through on their doctor’s instructions.  The calculations showed that 9,400 deaths could be prevented.

In contrast, using the same 70 percent compliance rate, the researchers postulated that if those across a broader spectrum of ages began consuming an apple a day, it would cover approximately 22 million people and avoid an additional 8,500 fatalities.  While the number is lower overall, the key here is that the extra benefit arises because there are no risks to eating an apple every day.  The same, however, definitely cannot be said for taking statins.  The research results favorws apples because statins have been linked to a number of potentially dangerous side effects.  Once the scientists took into account the projected thousands of cases of muscle disease and debilitating pain and more than 12,000 new cases of diabetes that their model found likely to occur with statins, the advantages of eating apples instead became quite clear. (Incidentally, although whole apples contain sugar along with their beneficial fiber and malic acid, no study has linked their consumption to diabetes.)

Statin medications work to help prevent cardiovascular disease by acting on the liver, where they block the activity of an enzyme that produces cholesterol.  But these are powerful pharmaceutical drugs that can have a major impact throughout the body.  They frequently cause muscle pain, soreness, and weakness, sometimes to the point where even walking is exhausting.  Other possible side effects include liver damage, nausea, diarrhea, constipation, skin rash, memory loss, and confusion.  And let’s not forget the elevation it can cause in blood sugar, raising the likelihood of diabetes and all of the complications that come with that disease.2 “Statin side effects: Weigh the benefits and risks.” Mayo Clinic. 13 July 2013. Accessed 22 December 2013. http://www.mayoclinic.com/health/statin-side-effects/MY00205   There have been numerous studies through the past decade providing evidence of the dangers of statins, and few without spin that can show true benefits.

While there may be a value for certain patients with serious cardiovascular ailments, particularly those who have already suffered a heart attack, for many it would appear that the possible risks far outweigh the benefits.  Instead, we can all lower our chances of having a heart attack or stroke by making some simple changes toward better living through natural heart health.  This study should serve as a reminder that sometimes it only takes one small move in the right direction to make a pretty big difference in our health.  In addition to adding an apple a day, maybe over time you can try to cut back on your junk food consumption and incorporate a little exercise each day.  You just might find you lose weight and feel better than you have in ages, and in the process gain a healthy immune system, lower your risk of heart attack and stroke, not to mention a range of other conditions along the way.