Restaurants No Better Than Fast Food 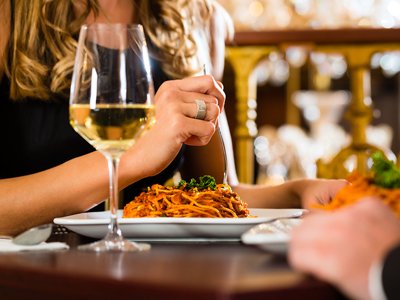 Life can be a whirlwind sometimes. Rushing here and there, working late, running errands, or shuttling the kids to various afternoon and evening activities. All of this can leave you with little time to even think about what to have for dinner, much less actually cook it. So it’s not so bad to stop at a local restaurant a few nights a week to eat in or take out some food for the family. After all, that’s a much better choice than opting for fast food on nights like these. Right? But before you give yourself too hearty a pat on the back, think about this: new research has determined that many meals in full-service restaurants may be just as high in fat, calories, and sodium as fast food offerings.

The study, which was conducted by scientists at the American Cancer Society and the University of Illinois in Chicago, found that meals in restaurants appear to be higher in calories and less healthy than meals typically served at home.1 Gupta, Saarik. “Eating out costs you 200 calories.” CNN. 7 August 2014. Accessed 10 August 2014. http://www.cnn.com/2014/08/07/health/restaurant-fast-food-calories/index.html?hpt=he_c2 The subjects were more than 12,000 adults between the ages of 20 and 64 residing throughout the United States who took part in the National Health and Nutrition Examination Survey. The scientists focused on specific questions that they had answered in detail about what they had consumed on two particular days.

Quite a few of the volunteers had dined out on the days in question. Probably not surprisingly, approximately 30 percent of the subjects ate at a fast food restaurant on both days. About 28 percent went to a full-service restaurant on day one. And about 20% did so on day two. The remainder of the participants ate their meals at home both days.

The subjects reported what they ate on the two days no matter where it was consumed. Those who dined out–whether at a fast food joint or regular restaurant–added an average of 200 extra calories per day compared to those who had dined on homemade fare. That is a difference of approximately 10 percent of total daily calorie intake for an adult man or woman of sedentary to moderate activity levels. This type of overindulgence several times a week can add up very quickly to excess weight if there is not a corresponding increase in exercise.

Dining out was also associated with a higher intake of saturated fat, salt, and sugar versus a home cooked meal. And the news was bad in all of these areas for both restaurant and fast food patrons. In fact, those who reported eating in a full-service restaurant had close to a 20 percent jump in their daily sodium intake, while the fast food diners faced only a 13 percent sodium bump. Neither is good, but fast food was actually the lesser of the evils for once. And this finding was consistent with a recent study by the Center for Science in the Public Interest, which discovered that many chain restaurants–both full service and fast food–have increased the amount of sodium in their meals since 2009.2 “Chain Restaurants Decrease Sodium Slightly but Progress is Slow & Uneven, Report Finds.” Center for Science in the Public Interest. 2 July 2014. Accessed 12 August 2014. http://cspinet.org/new/201407021.html

When the scientists analyzed the data by demographics, they discovered that the effect was worse among individuals who identified as black than it was for those identifying as either white or Hispanic, whether they were eating fast food or a sit-down meal. The black subjects tended to have a higher calorie count when dining out than did their white and Hispanic peers. When broken down instead by socioeconomics, those with higher income levels appeared to add the fewest extra calories when eating in a restaurant. Yes, it’s possible that the more pricey dining establishments they would likely frequent might offer a wider variety of healthy, lower-calorie options. But, since many expensive restaurants also feature items like huge slabs of steak and heavy cheese or cream-based sauces, it is clearly more about the choices we make.

So, because it’s unrealistic to think that most of us will never eat out again, the solution is finding better ways to do it. Try to eat in restaurants less frequently. You can include plenty of interesting flavors and exotic foods in your cooking at home with really minimal effort, and then you are in control of the ingredients. When you do eat out, choose foods that aren’t fried and order lots of vegetables. Unless they are tempura battered or drowning in sauce, veggies can help keep your fat and calorie count down. Plus, be mindful of portion sizes. Most restaurants serve way too much food. If you are worried you will overeat, cut the portion in half before you take your first bite to remind yourself when to stop.

As Jon Barron likes to remind us, “We dig our graves one forkful at a time.” With that in mind, it’s probably worth slowing down how fast we dig.