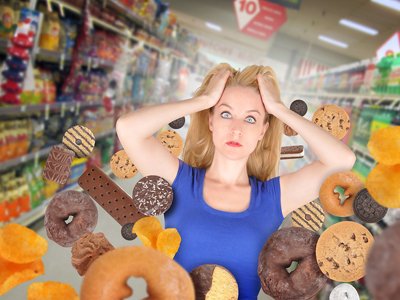 We all know it’s not healthy to eat lots of sugary foods. If you do choose to indulge a little, though, definitely check those ingredient labels whenever you can. Your body does not react the same way to all forms of sugar, and a prime example of this is high-fructose corn syrup, a manufactured form of sugar that–as its name suggests–contains an increased level of fructose. And now, new research has shown that eating foods with fructose may actually leave you feeling hungry.

The study, which was conducted at the Keck School of Medicine of the University of Southern California in Los Angeles, found that consuming sugar in the form of fructose appears to have only a minor impact on the brain center that tells us we are getting full.1 Mozes, Alan. “Does high-fructose corn syrup make you hungrier?” CBS News. 10 December 2014. Accessed 14 December 2014. http://www.cbsnews.com/news/does-high-fructose-corn-syrup-make-you-hungrier This can result in lingering feelings of hunger after eating, decreased appetite control, and overeating. The subjects were 24 males and females between the ages of 16 and 25. They took part in a lab-based test to compare fructose and glucose, two forms of simple sugars.

The volunteers were each provided with a drink to consume that was sweetened either with glucose or fructose. Each was then scanned by a functional magnetic resonance imaging machine to measure in real-time the level of activity in the nucleus accumbens, which is a reward center of the brain that produces the neurotransmitters dopamine and serotonin and registers satiety. During the scanning process, the participants were shown pictures of an assortment of foods, including sugary items such as cake, and asked to rate how hungry they were as they watched.

The levels of hunger reported were higher among the people who drank the fructose-sweetened beverage compared to those who drank the glucose-sweetened beverage. And the brain scans provided evidence that there was more activity occurring in the nucleus accumbens in those who consumed fructose, resulting in a less sated feeling and leading to a craving to consume more food.

These findings build on 2013 research at the Yale University School of Medicine in New Haven, Connecticut that offered evidence of glucose consumption activating more connections in the hypothalamus, signaling a feeling of fullness, than consumption of fructose did.2 Page, Kathleen A.; et al. “Effects of Fructose vs Glucose on Regional Cerebral Blood Flow in Brain Regions Involved With Appetite and Reward Pathways.” Journal of the American Medical Association. 2 January 2013. Accessed 15 December 2014. http://jama.jamanetwork.com/article.aspx?articleid=1555133 In addition, there is another mechanism at work, shown in a 2005 study at the University of Toronto in Canada in which eating or drinking fructose-sweetened foods produces only a limited secretion of insulin (often considered one of its benefits),3 Basciano, Heather; et al. “Fructose, insulin resistance, and metabolic dyslipidemia.” Nutrition and Metabolism. 22 February 2005. Accessed 15 December 2014. http://www.nutritionandmetabolism.com/content/2/1/5 but which means you continue to feel hungry.

Unfortunately, there were certain limitations to the current study. The scientists used an extremely small group of subjects and would have made a stronger case had they recruited a larger population sample. In addition, it is arguable–as those employed by the corn refining corporations are wont to tell us–that fructose and glucose are rarely consumed completely separately since most foods with added sugar contain some combination of these two forms. According to that logic, since even high-fructose corn syrup contains both fructose and glucose, it does not establish whether the body would react differently after eating high-fructose corn syrup versus table sugar.

However, all of that being said, the current study does contribute to the growing body of evidence that fructose is a form of sugar we may be better off avoiding for the most part, at least as a food additive and certainly in the case of high-fructose corn syrup. For much more on how fructose is absorbed differently than other sugars and the health problems linked to high-fructose corn syrup, read Jon Barron’s Blood Sugar Levels & High Fructose Corn Syrup. So read those labels, and if you see high-fructose corn syrup close to the top, put it back on the shelf and find an alternative.