Corn is healthier than you think:

Ears of corn are a staple at lots of summer barbecues and they are a crisp, tasty accompaniment to many of the meats typically served. You may choose to pass up the corn these days, thinking it is just a starchy, carbohydrate-laden side dish nearly devoid of nutrients. But if that’s the case, you are definitely off the mark. We’re here to tell you that you can and should be enjoying those ears of corn and you’ll get health benefits in addition to all that good flavor.

Celebrate National Corn on the Cob Day on June 11, and keep on celebrating it all summer, as long as you can find fresh sweet stalks. Read on to discover five health benefits that you will receive from eating corn.

As with many types of vegetables, corn is high in fiber. And consuming more fiber is associated with a reduced risk of high blood pressure and lower levels of cholesterol in the bloodstream. In fact, a 2013 study at the University of Leeds in England found that the higher a person’s intake of dietary fiber, the less of a chance they would have of experiencing a stroke and increasing fiber intake by seven grams a day contributes to a seven percent drop in stroke risk.

A good source of iron, corn can offer some protection from anemia, a condition that arises due to a lack of healthy red blood cells to carry a sufficient amount of oxygen throughout the body. This tends to be more common in young women and people with chronic health issues or intestinal disorders. But corn not only provides iron; it also contains vitamin A and beta carotene, which have been linked with greater absorption of iron.

Corn is rich in both lutein and zeaxanthin, which are carotenoids that have been shown to help maintain our vision. A 2015 study at the Harvard T.H. Chan School of Public Health in Boston found that eating foods rich in lutein and zeaxanthin may offer considerable protection from age-related macular degeneration, a common cause of vision loss in older people.

Consumption of corn may be very beneficial for those whose diets are limited in some ways. For example, individuals with celiac disease cannot eat many forms of carbohydrates, but corn provides a great gluten-free alternative. What’s more, corn is relatively high in protein for a vegetable, offering around three grams per ear, which can help vegetarians reach an adequate intake for the day.

The fiber in corn, already mentioned above, moves food matter through the digestive system more efficiently, which keeps bowel movements regular and prevents constipation. Corn’s insoluble fiber has been found to promote the growth of good bacteria in the gut as well, and that benefits the digestive process and gives a boost to the immune system.

As for the concern that corn is high in calories and sugar, those are myths worth busting. An ear of corn—not slathered in butter or doused with salt—provides approximately 150 calories, which is considerably less than the 310 found in a bunch of grapes or the 270 in a cup of cherries. In addition, the fiber in corn keeps you feeling satisfied longer, so you might be less likely to indulge in junk food later. And corn is considerably sweeter than many other vegetables, yet an ear only contains roughly six grams of sugar—similar to the amount found in a serving of carrots.

So, don’t hesitate to pick up husks of corn at your local farm stand or supermarket. Cook your ears on the barbecue or steam them to retain most of their nutrients. And your leftovers can be used as a great addition to salad or in a delicious homemade salsa.

Note: Two Issues to be Aware of.

More than 92% of the corn (maize) planted in the United States is genetically modified—most of it to be Roundup (glyphosate) ready. In fact, corn is one of the most common genetically modified crops worldwide.1”ISAAA Brief 46-2013: Executive Summary – Global Status of Commercialized Biotech/GM Crops: 2013.” ISAA. 2013. http://www.isaaa.org/resources/publications/briefs/46/executivesummary/default.asp And despite claims to the contrary, you don’t want glyphosate in your food. It’s worth paying extra for organic corn. 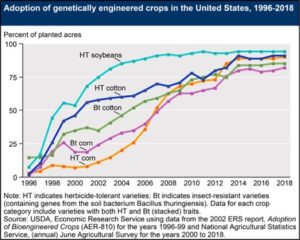 Corn is a known allergen. It contains a protein, zein, which is the suspected culprit in this allergy. A reaction occurs when the body recognizes this protein as foreign and releases immunoglobulin E (IgE), antibodies to attack the protein. IgE then stimulates cells in the immune system to secrete substances such as histamines that are responsible for the symptoms. Only about 1-6% of people seem to suffer from corn allergies, but for them, the symptoms can be severe.