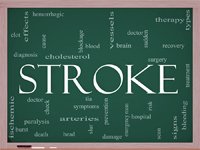 The statistics on fiber consumption in the United States are underwhelming, to say the least.  The average American adult eats only 15 grams per day, whereas the recommended consumption is 25 to 30 grams.1 “Increasing Fiber Intake.” UCSF Medical Center. Accessed 5 April 2013. http://www.ucsfhealth.org/education/increasing_fiber_intake   And that’s a shame, since high fiber food provides a lot of health benefits. In addition to helping protect us from diabetes and heart disease, a new study has found that fiber can even lower a person’s risk factors for stroke.

The research, which took place at the University of Leeds in England, discovered that just by increasing fiber intake by seven grams a day, the chance of becoming a stroke victim drops by seven percent.2 Mozes, Alan. “More Dietary Fiber Might Help Thwart Stroke: Study.” WebMD. 28 March 2013. Accessed 4 April 2013. http://www.webmd.com/stroke/news/20130328/more-dietary-fiber-might-help-thwart-stroke-study   The scientists reached this conclusion after comparing the findings of eight different studies conducted across Europe, America, Japan, and Australia, representing more than two decades worth of data on the topic from 1990 through 2012.

The researchers found that overall, the higher a person’s intake of dietary fiber and high fiber foods, the less of a chance they would have of experiencing an initial stroke.  This is obviously very important, because strokes are a leading cause of both death and disability.  And they are not just a problem for the elderly.  A 2011 study at the Centers for Disease Control in Atlanta, Georgia, found that the rate of strokes in children and younger adults has risen by as much as 51 percent in just over a 10-year period.3 Kuklina, Elena V., et al. “Ischemic stroke hospitalizations decline in middle aged, elderly, increases in young.” American Heart Association. 9 February 2011. Accessed 5 April 2013. http://newsroom.heart.org/news/1250   A stroke develops when a blood clot forms and blocks an artery (ischemic stroke) or a blood vessel ruptures (hemorrhagic stroke), both of which will interrupt blood flow in a portion of the brain–thus killing those brain cells.  It is estimated that 15 million people around the world have a stroke each year and that strokes are responsible for five million deaths and another five million permanent or long-term complications.4 “Stroke Statistics.” The Internet Stroke Center. Accessed 5 April 2013. http://www.strokecenter.org/patients/about-stroke/stroke-statistics

Eating more fiber-rich foods likely helps prevent a stroke by lowering a person’s risk of developing other health issues that are linked as risk factors for stroke.  For example, a high-fiber diet is associated with a reduced risk of having high blood pressure as well as high levels of LDL cholesterol in the bloodstream.  Fiber binds to this “bad” form of cholesterol and does not allow it to enter the bloodstream.  Instead, the fiber helps to eliminate the cholesterol through the digestive system.

Interestingly, the study found that the amount of fiber consumed doesn’t have to increase tremendously to be beneficial.  While the advantages were greater as fiber intake increased, even a relatively small bump–by only seven grams daily (the amount found in one medium size yam5 “Bowel Function, Dietary Fiber.” Continuum Health Partners. (Accessed 5 April 2013.) http://www.wehealny.org/healthinfo/dietaryfiber/fibercontentchart.html )–made a big difference.  Realistically, most of the people who eat diets low in fiber are not going to change overnight and start choosing only fiber-rich options.  This study reminds us that it is perfectly acceptable to start off small, making one change at a time and still reap the benefits of a healthier diet.  For example, the difference in seven grams of fiber a day might simply mean a change from white bread, pasta, and rice to their whole-grain versions.  Maybe it’s overly optimistic, but it would seem that even the most nutritionally-challenged among us could agree to such minor alterations to improve their health and potential longevity.

Good sources of fiber include many natural foods that are chock full of antioxidants as well, such as fruits and vegetables.  But eat them in an unprocessed form and leave the skins on your produce to maximize the fiber it provides.  When eaten skinless, a potato (keeping in mind that potatoes probably shouldn’t be eaten at all because of their high glycemic impact) only offers 2.3 grams of fiber, but with the skin on, the amount nearly doubles to 4.4 grams.6 “Fiber Content of Foods.” University of Mississippi. Accessed 5 April 2013. http://www.library.umc.edu/pe-db/pe-fiber-food.pdf Beans are also a great source of fiber. And pay attention to your grain consumption too (again assuming that you choose to eat most grains despite their high glycemic impact).  All grains are not created equal, and to truly be a good source of fiber, you need to become a savvy label reader to find true whole grains.  By making these small dietary changes, you just might lower your risk of stroke and start developing some long-lasting healthy habits.