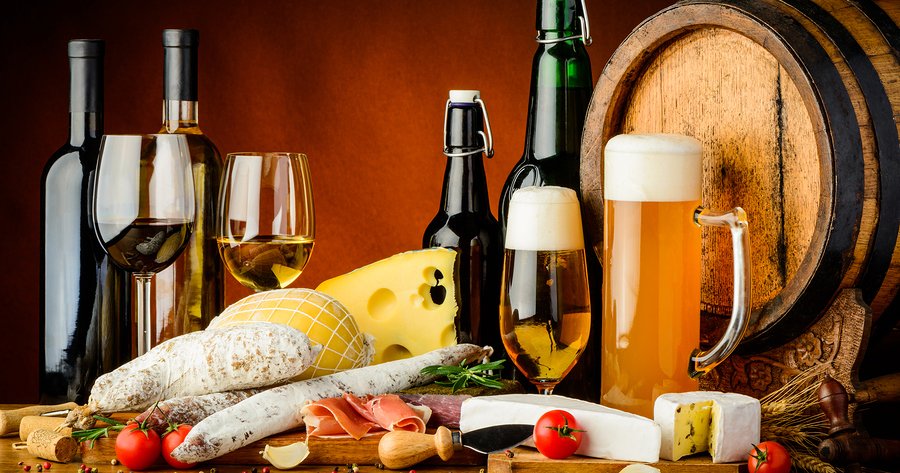 With the holiday season just behind us, you may be dealing with the typical post-New Year’s weight gain. Too many dinners out, too many holiday desserts, and too many parties with flowing alcohol have added extra pounds to many waistlines this time of year. We know drinking serves up plenty of excess calories, but so do the snacks that often come after a few drinks. Now, new research suggests something that we’ve probably always known: people tend to eat more once they’ve had some alcohol because it lowers their inhibitions.

The study, which took place at the University of Liverpool in the United Kingdom, found that consuming alcohol impairs the inhibitory control that we normally would use to stop ourselves from overeating.1 Christiansen, Paul; et al. “Alcohol’s Acute Effect on Food Intake is Mediated by Inhibitory Control Impairments.” Health Psychology. 21 December 2015. Accessed 2 January 2016. http://psycnet.apa.org/index.cfm?fa=search.displayRecord&id=1A569068-E92F-E9BB-0824-4D6AEA52815C&resultID=1&page=1&dbTab=pa&search=true The subjects were 60 female undergraduates who were randomly divided into two groups. One group received mixed drinks containing vodka and diet lemonade. The other group was provided with diet lemonade drinks that had a vodka mist sprayed on top to make it smell and taste the same as an alcoholic beverage, but these actually contained no alcohol.

All of the participants were given a questionnaire about their food cravings and eating habits to fill out. When that was complete, they consumed their drinks. Next, the volunteers performed a task that involved words associated with colors appearing on a screen. The words green, yellow, red, and blue alternately appeared, but they showed up in a color different than what they are. So, for example, blue might pop up in green writing. Each volunteer had to verbalize what color the words appeared in rather than what color the word said. When this testing was done, the women were offered chocolate chip cookies and permitted to eat as few or as many as they desired.

The subjects who had consumed alcohol performed more poorly on the color word task than their counterparts who had not consumed alcohol but believed that they had. The women in the group that drank vodka also ate greater quantities of cookies. The scientists concluded that the difficulty with the color task and increased cookie consumption in the participants drinking alcohol were both a result of a decrease in their inhibitory control. This makes sense since inhibitory control is the part of our executive function that allows us to resist taking certain actions that we know we should avoid.

The research did have some flaws, including the tiny population sample used that lacked diversity in age and possibly background. There was also a small segment of the women who drank but did not increase their intake of cookies. The investigators explained this away due to their responses on the food questionnaire showing that they normally restrict the amount they eat in an effort to either lose or maintain their weight. While that is a plausible influence, it is possible that the outcome would be different had the number of volunteers taking part in the trial been more substantial.

At any rate, we do know that alcohol can reduce our self-control, and a 2011 study at the University of Missouri-Columbia showed that drinking may dull the signal in the brain that warns us when we are making a mistake.2 Bartholow, Bruce. “Alcohol dulls brain ‘alarm’ that monitors mistakes, MU study finds.” EurekAlert. 1 September 2011. Accessed 3 January 2016. http://www.eurekalert.org/pub_releases/2011-09/uom-adb090111.php Therefore, it’s not a great leap to suggest that having a couple of drinks might make people considerably more likely to lower their inhibitions about eating too much, partaking in late night indulgences, and choosing junk food that they typically would not consume. And that’s all on top of the extra, empty calories provided by the alcohol in the first place.

So what are you to do to avoid this, short of total alcoholic abstinence? The key is to be more aware of when you are making bad eating decisions. Therefore, if you’re reading about this study and say, “Hey, that’s me! I always go for pizza (or down a pint of ice cream or order a plate of French fries) after drinking,” then at least you recognize the problem. Now it’s just a matter of not drinking so much that your lowered inhibitions overtake your willpower. If you limit your alcohol consumption to the point at which you maintain better control, you can stop the mindless eating and start making healthier choices.