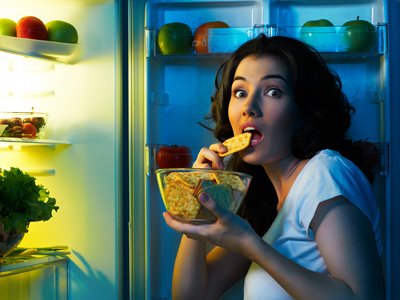 Lots of us are late-night snackers. You may be the type who is careful about what you eat all through the day, then allow yourself some indulgences as you watch TV just before bed. Or maybe you are not a great sleeper so, rather than laying in bed staring at the ceiling, you go make yourself a cup of tea…and end up eating a sleeve of cookies while you wait for the water to heat. In any case, while you obviously don’t want to have a complete pig out, it’s probably not so bad to have a few munchies late at night if you’re eating well the rest of the day, right? As it turns out, not really, at least according to new research that suggests you might be sabotaging all of your healthy eating efforts with nighttime snacking.

The study, which took place at the Salk Institute in La Jolla, California, found that the timing of our intake of calories may be every bit as important in weight control as the number of calories we consume.1 Firger, Jessica. “Don’t sabotage your diet with a midnight snack.” CBS News. 3 December 2014. Accessed 7 December 2014. http://www.cbsnews.com/news/time-restricted-diet-have-a-snack-just-not-in-the-middle-of-the-night/. Instead of human subjects, 400 laboratory mice were used for the experiment. Some of the mice selected were normal weight while others were obese. They were randomly divided into groups that were fed different food, including a high fat diet, a fructose diet, and a fat and fructose combo diet. In addition, some groups were fed across a 15-hour span each day while others were placed on a time-restricted schedule of only nine to 12 hours.

Interestingly, the mice that were fed during a shorter time span gained less weight than did those mice fed over a longer period of time–even though both groups were fed the same quantity of food. Plus, the mice in the high-fat diet group with restricted eating times all remained normal weight or lost weight. In contrast, the mice fed high-fat food for 15 hours did not lose a comparable amount of weight.

What’s more, the benefits obtained by the shortened eating schedule appeared to continue working for the mice even when they were permitted periods of eating for longer durations. The scientists set up a schedule similar to that followed by many people, in which the mice were restricted to a nine-hour feeding day during the week but given longer feeding periods for the weekend. These mice did not exhibit weight gain. And obese mice that had been allowed to eat all day long were switched to a nine-hour eating schedule to measure its effects. After just a few days on the new regimen, those mice lost five percent of their body fat despite the fact that their calorie and fat intake was exactly the same as it had been previously.

While the possibility of losing excess weight just by cutting out all eating after, say, 6:30 pm sounds very exciting, let’s keep in mind that this research was conducted on mice rather than humans. There are many functional differences between the two species, so something that produces a particular result in mice may not have the same result in people. But it does make sense that consuming calories at night might cause us to gain weight, and, in fact, we saw that demonstrated in a 2007 study at Monash University in Melbourne Australia, which found that eating mainly in the evening and night was associated with an elevated BMI.2 Colles, SL; et al. “Night eating syndrome and nocturnal snacking: association with obesity, binge eating and psychological distress.” International Journal of Obesity. November 2007. Accessed 8 December 2014. http://www.ncbi.nlm.nih.gov/pubmed/17579633

It is not clear exactly what it is about limiting food intake to a smaller window of hours a day that might have a positive influence on bodily weight control. The researchers suggested the key may be that eating throughout the day leads the body to continually store more fat and produce greater amounts of glucose since there is never any time to “process” it. By their theory, restricting eating time might give the body the chance it needs to break down fats and cholesterol and promote optimal liver function by using up previously stored quantities of fat, cholesterol, and glucose.

Another possibility could be that the type of foods most people choose to eat shortly before bedtime are more likely to add pounds because of how they affect your sleep patterns. Greasy items like chips or French fries can promote indigestion as you lay in bed, and high-fat foods such as ice cream or a piece of cake may slow down your digestive process and affect the quality of your sleep–not to mention that the sugar can jack you up just before bed. And lack of sleep has been associated with an increased risk of diabetes, obesity, and a range of other problems. So do your body a favor and skip the evening junk food. If you can’t unwind without mindless munching, at least stick with cut up fruits and vegetables or, better yet, take up a hobby like knitting that keeps your hands busy.