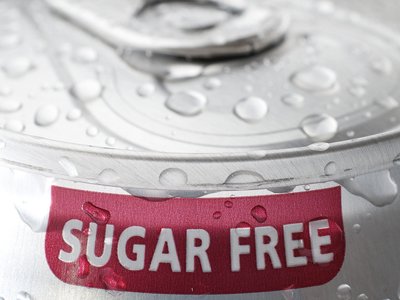 Lots of women looking to cut back on sugar and extra calories drink diet soda several times a day. It contains absolutely no calories, so many people feel they can consume as much as they want without risk of weight gain. However, diet drinks have increasingly been linked with a variety of problems, including new research that shows that women who frequently indulge in diet beverages may face an increased risk of heart disease and potentially death.

The study, which took place at the University of Iowa Hospitals and Clinics in Iowa City, found that those women who consume diet sodas daily have a substantially greater likelihood of experiencing a cardiovascular event and are also more likely to die from the occurrence.1 Fox, Maggie. “Diet Drinks Linked With Heart Disease, Death.” NBC News. 29 March 2014. Accessed 9 April 2014. http://www.nbcnews.com/health/diet-fitness/diet-drinks-linked-heart-disease-death-n66476 The subjects were 59,614 middle-aged American women who were participating in the Women’s Health Initiative Observational Study. All of the volunteers completed surveys about their dietary habits that included beverage preferences with a specific focus on consumption of diet drinks over the course of the previous three months.

Almost nine years after the start of the research, the scientists followed up on how the participants were faring in their cardiovascular health. Of the women who reported drinking two or more diet beverages on a daily basis, 8.5 percent had developed heart disease. In comparison, 6.8 percent of the women who reported drinking less than five diet beverages a week had heart disease, along with 7.2 percent of the women who reported drinking no diet beverages or only having them once or twice a month. That might not seem like a tremendous difference, but when looked at another way it shows that those who consume two or more diet drinks every day have a 30 percent higher risk of having a heart attack or similar cardiovascular issue. And strikingly, those women are also 50 percent more likely to die than are their counterparts who infrequently or never choose diet drinks.

The study was not designed to prove that diet sodas cause these negative health effects, but it does establish an association. However, there remains the possibility that it is not the artificially sweetened drinks themselves that are raising cardiovascular risks for the women, but other bad lifestyle choices they make. Perhaps they are trying to save the calories in their beverages because of unhealthy junk food they are eating or the fact that they forgo exercise. How many people do we know who order the jumbo double burger with a side of biggie fries, but then order the large diet soda to have with it–as if that made everything all right?

At any rate, even if the diet drinks themselves don’t promote heart disease, they have been linked in numerous studies to other ill effects. A 2012 study at Harvard School of Public Health and Brigham and Women’s Hospital in Boston found an elevated incidence of leukemia, non-Hodgkins lymphoma, and other blood cancers among those who regularly drank diet sodas.2 Schernhammer, Eva S.; et al. “Consumption of artificial sweetener- and sugar-containing soda and risk of lymphoma and leukemia in men and women.” The American Journal of Clinical Nutrition. December 2012. Accessed 11 April 2014. http://ajcn.nutrition.org/content/early/2012/10/23/ajcn.111.030833.abstract It may affect mental health as well, as a 2013 study at the National Institutes of Health in Bethesda, Maryland, showed an association between the intake of diet drinks and a greater likelihood of a clinical diagnosis of depression.3 “Hold the Diet Soda? Sweetened Drinks Linked to Depression, Coffee Tied to Lower Risk.” American Academy of Neurology. 8 January 2013. Accessed 11 April 2014. http://www.aan.com/PressRoom/Home/PressRelease/1128 Plus, diet sodas don’t appear to be a very useful way to help control weight since a 2008 study at Purdue University in West Lafayette, Indiana discovered that the consumption of artificial sweeteners can actually make you fatter.4 Swithers SE and Davidson TL. “A role for sweet taste: calorie predictive relations in energy regulation by rats.” Behavioral Neuroscience. February 2008. Accessed 11 April 2014. http://www.ncbi.nlm.nih.gov/pubmed/18298259

On the bright side, at least soda consumption seems to be on the wane these days. According to news from Beverage Digest, an industry information service, Americans drank 51 gallons of soda on average in 1998, whereas the current number is down to 44 gallons.5 Avila, Jim and Marshall, Serena. “Soda Losing Its Grip on America.” ABC News. 2 April 2014. Accessed 11 April 2014. http://abcnews.go.com/Business/soda-losing-grip-america/story?id=23151625 While that’s still quite a bit of soda, it is 20 percent less, which is definitely a trend in the right direction. And when the statistics are broken down further, it seems that artificially sweetened sodas are dropping in popularity even more notably than their sugary cousins. In 2013, overall soda sales dropped by approximately three percent, and sales of diet sodas fell by six percent.

There’s no clear answer why soda is losing some popularity. Maybe people are starting to pay a little more attention to soda’s potential health effects, or at the very least don’t want to keep it in their homes for regular consumption. But it is positive news, whatever the reason. When you want a calorie-free drink, water is always the better choice than diet soda.