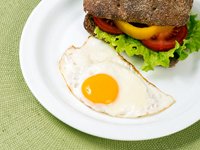 Weight loss is an important step in preventing diabetes in overweight and obese individuals.  However, skipping breakfast to save on calories is not the way to achieve this goal.  In fact, new research has found that not eating breakfast may actually increase an overweight woman’s risk of getting diabetes.

The study, performed at the University of Colorado in Boulder, showed that eating in the morning affects the body in ways that may help confer some protection from the development of diabetes.1 Doheny, Kathleen. “Skipping Breakfast May Raise Diabetes Risk.” WebMD. 16 June 2013. Accessed 26 June 2013. http://diabetes.webmd.com/news/20130616/skipping-breakfast-may-raise-diabetes-risk   The subjects were nine women who were overweight or obese, with an average age of 29.  Their participation was required over the course of two days.  One of the days, the volunteers were told to eat breakfast and the other day they were told to skip their morning meal.

On both days of the experiment, the scientists drew blood from each of the women after they had lunch.  These samples were then analyzed to assess their insulin and blood sugar levels.  Typically, glucose levels in the blood are lowest in the morning, then elevated after we consume a meal as the body breaks down the food and converts it to glucose.2 “How does food turn into glucose?” University of Illinois Extension. Accessed 27 June 2013. http://urbanext.illinois.edu/diabetes2/subsection.cfm?SubSectionID=2 The higher levels of glucose spur the pancreas into action, causing it to secrete insulin so the glucose can be absorbed by the body’s cells to be used as a source of energy.

But in the case of the overweight study participants, both their insulin and glucose levels were significantly higher after lunch when they had passed up breakfast as compared to the day that they had eaten a morning meal.  The insulin response, which is how the body reacts to rising blood sugar levels, was 28 percent greater on average in the women on the day that they had missed breakfast.  The glucose response, or how much the blood sugar level rises, was 12 percent greater. That means that not eating breakfast forced their bodies to have to produce much larger quantities of insulin to properly digest their food.

This research was obviously limited in scope, as it only included a sample of nine subjects over just two days.  The results could potentially be different if it was expanded to a wider population range of women.  It also focused on a very short time period, providing no indication of how long the elevated levels of glucose and insulin might last or whether the body might make some adjustments over the long term if breakfast was skipped consistently.

But keep in mind, this is not the first time we’ve talked about the importance of breakfast…and the bigger the better. Back in 2008, we examined a much larger study that found that women who ate a big breakfast (610 calories, including a whopping 58 grams of carbs, 22 grams of fat, and 47 grams of protein) lost five times as much weight over eight months as women who ate a “sensible” 290 calorie low-carb breakfast (including just seven grams of carbs and and 12 grams of protein). Go figure!

So does this mean that you should stuff your face with pasta or donuts at 7 am? No, no, no! In fact, the diet consumed by the morning big-eaters, while effective for weight loss, leaves something to be desired. Certainly, it’s better balanced than the pastries-with-coffee option, which offers essentially no nutrients, no protein, and plenty of health-destroying bad fats and sugar. But the diet that led to weight loss contained no fruit or vegetables in the morning (although afternoon and evening meals had these elements), and also contain lots of dairy. There are better ways to get a well-balanced morning slam without loading up on mucous-producing, allergy-inducing, immune-destroying, hormone-laden milk, cheese, nitrate-spiked breakfast meats, and buttered toast. Weight loss is important, but so is taking in foods that support your Baseline of Health. Diabetes is only one way to die.

The good news is that diabetes is often preventable, even once it has begun to take effect.  Therefore, anyone who is overweight should begin exercising and eating a more nutritious, healthy balanced diet and exercising daily to shed excess pounds and remove two of the major diabetes risk factors right off the bat.  And based on what we learned from our first study, make sure to start each day with a healthy breakfast–that is a complete balanced meal that combines with the other meals that you eat during the day to provide 100% of your nutritional needs (protein, essential fatty acids, fiber, vitamins/minerals, phytochemicals, etc.). That means you want to consume approximately 33% of your requirements for everything at breakfast. Where diseases such as diabetes are concerned, it is important to not be our own worst enemy.

For a much more detailed look at diabetes and how it affects the body, check out Jon Barron’s Diabetes — The Echo Effect.