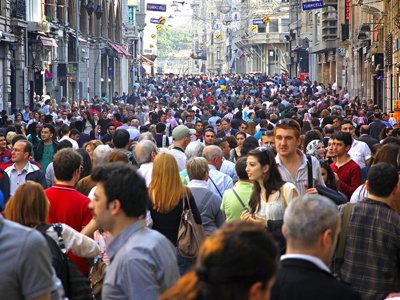 There are lots of potential downsides to life in a big city. It can be crowded and congested, noise and air pollution are often plentiful, and crime rates are typically higher than in less urban settings. However, upsides definitely exist too. And a major one, according to new research, is that residing in a place that is conducive to lots of walking means you may be less likely to become obese or develop diabetes.

The study, which took place at St. Michael’s Hospital in Toronto, Canada, found that neighborhoods deemed “walkable” are a health boon since they reduce the chances that those who live there will gain an excess amount of weight or become diabetic.1 French, Marie. “City Dwellers Who Walk Less Likely to Get Fat or Diabetes.” Bloomberg. 17 June 2014. Accessed 25 June 2014. http://www.bloomberg.com/news/2014-06-17/city-dwellers-who-walk-less-likely-to-get-fat-or-diabetes.html The focus area was several neighborhoods across southern Ontario between the years 2002 and 2012.

During the decade covered by the study, the scientists found that the rates of overweight and obese individuals decreased by nine percent in the neighborhoods considered most walkable. Conversely, those neighborhoods that were not as conducive to walking saw obesity and overweight rates increase by 13 percent. According to information from the Centers for Disease Control and Prevention in Atlanta, the United States obesity rate was 31 percent in 2002 among adults,2 “Obesity Still on the Rise, New Data Show.” Centers for Disease Control and Prevention. 8 October 2002. Accessed 27 June 2014. http://www.cdc.gov/nchs/pressroom/02news/obesityonrise.htm and it rose to 34.9 percent by 2012 in the same population.3 “Adult Obesity Facts.” Centers for Disease Control and Prevention. 28 March 2014. Accessed 27 June 2014. http://www.cdc.gov/obesity/data/adult.html Therefore, any drop that occurred during this time frame is a wonderful move in the right direction.

For the study’s purposes, an area was determined to be walkable if it had numerous locations easy to access within a 10-minute walk. It was based on an index the scientists designed that took into account the density of both people and homes, how connected the streets were, and the number of services and retail stores in the vicinity. The proximity of parks, markets, shops, and various other brick-and-mortar destinations available within approximately a half-mile distance from a neighborhood was the benchmark. This distance was not selected randomly, but because several studies have found it to be the general cutoff of how far most people are willing to walk for their errands.

Locations that are more spread out or have that feeling of suburban sprawl simply do not encourage walking as much. In suburbia, you don’t walk to the store; you drive to the store. Most people are not dedicated enough to take a nice stroll on a warm evening to do a bit of shopping if the store is two miles away. Even if they can comfortably make it there, the return trip while carry groceries may be more than they bargained for. But it is vital that we don’t always jump into the car to get where we’re going. And many of us not only take the car, but scramble to find the closest parking space, then move the car from errand to errand, even if the stores are close by, just out of convenience and haste.

This mentality probably has a lot to do with why so many people are obese and dealing with diseases directly related to their excess weight, including diabetes. Those who don’t make time to exercise are also the individuals who drive everywhere to get things done quickly. But why? To rush home and watch television all evening? Then these same people wonder why they are slowly but surely packing on the pounds.

To maintain a healthy weight and lower your risk of developing diabetes, as well as high blood pressure, cardiovascular disease, and other conditions, it is essential to not only eat a healthy low-calorie diet, but also to get your body moving. If you live in a city, skip the train or the bus for a while and see what a difference it can make. In more suburban neighborhoods, it might be more challenging to leave your car behind entirely, but there are always options. Lots of downtowns have been revitalized and offer blocks of walkable shopping and services. Even if you have to drive to get there, you can still spend quite a bit of time walking and exploring the neighborhood. Or skip the shopping entirely and drive to a park or preserve where you can walk and appreciate the nature that’s all around you. You just might decide to push TV watching back a little bit and make walking a regular part of your schedule.