Not Exercising May Be Just as Deadly as Smoking 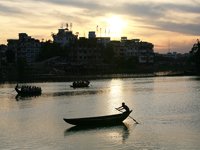 According to research at Federal University of Pelotas in Brazil, lack of exercise may very well be responsible for approximately 10 percent of global annual deaths — roughly the same number that the health scourge of cigarettes causes.

We’ve all got plenty of excuses for not getting our workouts in.  From “I had to work late” to “my gym isn’t really convenient” to “I’m not feeling so well today,” our lists run the gamut of justifications for lack of exercise.  But maybe the next time you are tempted to skip a workout, you should think twice.  New research has found that the failure to exercise may be responsible for as many deaths around the world as smoking.

That’s right, according to research at Federal University of Pelotas in Brazil, our lack of exercise may very well be responsible for approximately 10 percent of global annual deaths — roughly the same number that the health scourge of cigarettes causes.1  In many ways, that shouldn’t be surprising, since a sedentary lifestyle has been linked with a number of the same health problems as smoking, such as heart disease, high blood pressure, and some forms of cancer.2

The scientists compared the numbers of people who exercise or fail to exercise in 122 countries all over the world, which comprise 89 percent of the earth’s total population.  There were no obvious factors such as the region of the world or socioeconomic level of a nation that determined whether it was a more active or inactive society.  However, there were a few generalizations to be made.  The Americas, as a whole, were overall the least physically active area (“We’re number one!”), while portions of Africa and Southeast Asia were typically the most active.

And while poorer nations were found to be overall more exercise-oriented than more affluent ones, that hardly holds true in every case.  Yes, the least active nation in this study was Malta, a relatively wealthy Mediterranean island where more than 70 percent of its adults were found to get an unsatisfactory amount of exercise.  However, some of the countries not following far behind with more than 60 percent of adults inactive were Swaziland3 and the Dominican Republic,4 both developing nations with much lower socioeconomic levels.  Others near the top of the list of least-active countries included Britain, Japan, Serbia, Kuwait, and Argentina.

The countries in which the inhabitants were getting their share of exercise were generally poorer locales in Africa and Asia such as Mongolia and Mozambique.  The most active nation was Bangladesh, with more than a 95 percent adult activity rate.  It is quite possible that much of this is due to employment-related activity such as manual labor, tending fields, gardening, and housework in less affluent nations.  If that’s the case, numbers may shift in coming years as this type of exercise diminishes while exercising for no other reason than to achieve a good workout increases…just not as rapidly.

The researchers quoted statistics that close to three-quarters of the countries affiliated with the World Health Organization have created guidelines intended to get their populations moving.  However, less than half of these actually have financial backing and are being implemented.  So clearly, very few of us can wait for our governments to help us get motivated to exercise.  We all need to take matters into our own hands for our own benefit.

And maybe many of us in industrialized, higher income nations can take a page from our brethren in still developing parts of the world.  Getting in our exercise does not have to be about joining the biggest gym or buying the most expensive piece of exercise equipment.  While most of us aren’t going to ditch everything to move to a farm and start working the land, we can incorporate some simpler methods into our workouts.  Try walking or cycling instead of taking mass transit or driving, take a break from the errands and go for a hike or a long walk this weekend, or get a job done around the house like painting a room or cleaning out your gutters.  Making time for any form of physical activity can keep you fitter and much healthier in the long run.  If you need further reminders of why you want to exercise, read Jon Barron’s chapter in Lessons from the Miracle Doctors entitled “Move or Die.”

Gallery image with caption: Is Pollution Making It Dangerous to Walk?