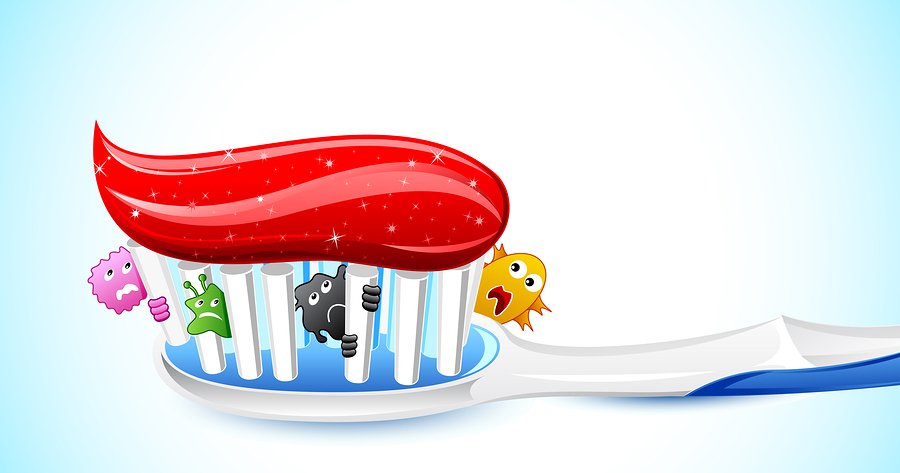 We all know there are plenty of germs floating around in busy places such as a shopping mall or office. And there have been lots of discussions in the media about bacteria lurking in public bathrooms. But what about your own bathroom? Yes, around the toilet, you would reasonably expect some germs, but assuming you clean the bathroom regularly, you probably think an item like your toothbrush would be relatively safe from germs, other than the ones already in your mouth. But according to new research, that belief might not be correct, particularly if you share a bathroom with other people.

The study, which took place at Quinnipiac University in Hamden, Connecticut, found that using a shared bathroom may greatly increase the risk of fecal germs inhabiting your toothbrush.1 Preidt, Robert. “Share a bathroom? You don’t want to know what’s on your toothbrush.” CBS News. 4 June 2015. Accessed 7 June 2015. http://www.cbsnews.com/news/share-a-bathroom-your-toothbrush-probably-has-poop-on-it/ The subjects were all students at Quinnipiac who shared communal bathrooms that averaged more than nine regular users each. (That’s less than half the Duggar family.) The scientists tested the participants’ toothbrushes to determine whether particles of fecal matter were present.

Quite disgustingly, more than 60 percent of the toothbrushes analyzed contained some level of fecal bacteria. And even worse, the likelihood that the fecal matter came from another individual who was sharing the bathroom was a whopping 80 percent. So it is cringe-worthy and unsanitary enough that some of your own feces particles might end up on your toothbrush, but these findings suggest that it is practically guaranteed that someone else’s might be there as well.

Sadly, the investigators found that little could be done to prevent this problem either. No matter how the volunteers stored their toothbrushes, there were approximately 60 percent that tested positive for the presence of fecal matter. In fact, keeping the toothbrush in a covered holder was actually worse than keeping it uncovered. When it is kept uncovered, the bristles dry after use, which is less conducive to bacterial growth. However, when the toothbrush is stored with a cover on, the bristles stay damp for a much longer period of time, resulting in the moist environment that is ideal for bacteria to flourish. Different methods of cleaning the toothbrush also did not prove to affect the germy outcome. Whether hot or cold water was used to clean the toothbrush or even rinsing it with mouthwash all still resulted in the same fecal bacteria statistics.

On the bright side, most of us are not in a situation in which we share a bathroom with nine or 10 other people, as is the case in dorm living. We don’t know whether a bathroom shared by only two or three people would have as high an instance of fecal matter bacteria on toothbrushes (and we can certainly hope that it isn’t since that’s a much more common scenario for most of us). Plus, besides the gross-out factor, the danger in coming into contact with these fecal germs lies in introducing bacteria, viruses, and other organisms that could affect the microbes of your gut and alter its balance. And the more people you are exposed to in this way, the more it could potentially harm you.

So if you can’t have a bathroom all to yourself, what can you do to keep your toothbrush free of fecal particles? Since keeping it covered is definitely not beneficial, the best choice may be to keep it as far from not only the toilet bowl but also the sink area as possible. We don’t know the set-up of the bathrooms used in the study, but the toilets might very well have been close enough to the shelves or vanities on which the toothbrushes were lying for the bacteria to be spewed across to them with a single flush. Another possibility is that the germs are coming by way of contaminated hands prior to washing at the sink near the toothbrushes. Therefore, if the toothbrush is not nearby, it would probably not come into contact with nearly as many germs.

UV toothbrush sanitizers are an option, but in general, they seem to get mixed reviews from consumers both in terms of their durability as well as their effectiveness even when they do work.2 http://www.amazon.com/Pursonic-Ultraviolet-Toothbrush-Sanitizer-Sterilizer/dp/B004XXQTZ0/ref=sr_1_3?ie=UTF8&qid=1433794422&sr=8-3&keywords=Pursonic+S20+UV The bottom line is that if you share a bathroom with many people, you might want to consider keeping your toothbrush in a different room and only take it to the bathroom when you are ready to brush. In a situation involving sharing a bathroom with only a couple of others, the best option might be to close the lid before flushing and encourage your bathroom-mates to do the same.