Dangers In The Bathroom 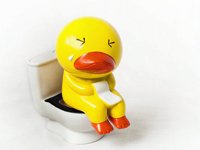 Few things evoke revulsion and complaint the way dirty public restrooms do. Even sparkling clean public restrooms make many of us uncomfortable. That’s why we try to keep things sanitary by helping ourselves to those toilet seat covers dispensed in the stall. But are the seat covers just a ploy by the paper products industry to lull us into thinking we’re safe? What dangers does the toilet seat actually present?

The truth is, toilet seat covers are like cosmetics: completely unnecessary, though they might put a dressed-up gloss on things. Yes, there are germs on toilet seats. Streptococcus, Staphylococcus, and E. coli can be found there, but their ability to harm you is very limited.  Apparently, most disease-causing organisms can survive only seconds on the toilet seat. The little buggers can’t infect you unless they have direct contact with your genital tract, or unless they enter through a cut or sore on your thigh or leg.1 The probability of contracting a disease from the toilet seat, unless you have open sores on your behind, equates to the chance of getting struck by lightning. This fact applies to all forms of transmittable disease, from hepatitis to STDs.

According to authors Krasnick-Warsh and Strong-Boag in their book, Children’s Health Issues in Historical Perspective, the common belief that sitting on the toilet seat puts you at risk for gonorrhea or crabs probably comes from early outbreaks of STDs at schools, when students pointed to the toilet seat as the culprit.2 The reality, of course, was that the disease spread not via the seat, but by the good-old-fashioned vehicle: sex.

What about the possibility of contracting a staph infection from a toilet seat? The fact is, you have a higher risk of catching staph from your cell phone. A 2006 study found staph bacteria on nearly half of all cell phones tested, whereas a 2009 study found the bacteria on only about three percent of all hospital toilets.3 That same study, by the way, concluded that no amount of regular cleaning would eliminate staph bacteria from the toilet seat; the only real preventative measure was to spray the seat with an alcohol solution or to use an alcohol wipe. For seat covers to be effective, they’d probably need to be used in combination with wiping. In any event, contagion is not an issue for most people with normally functioning immune systems.

In spite of the fact that they don’t do much of anything, toilet seat covers have been spreading to restrooms throughout the US. Most people, given the opportunity, use the covers when they’re available, and will probably continue to use them. They provide at least a psychological barrier against other people’s mess.  They also provide a nice stream of income to the people who manufacture, sell, and distribute them, bolstering the economy, though from an ecological point of view, many trees would be spared if we weren’t so needlessly paranoid.

Does this mean that toilet isn’t dangerous at all? Not exactly, but the actual dangers aren’t what you’d think. Toilets can cause broken hips, various injuries, and bruised buttocks if you miss the seat or if the cover slams. This isn’t a joke: in 2000, three physicians from Glasgow won the Nobel Prize for bathroom safety research on preventing bruised buttocks from toilet mishaps.4 Also, kids under the age of four occasionally drown in the toilet. In fact, half of all drowning incidents involving young children occur in toilets and buckets.5 The reality is that toilet accidents pose more of a threat than the possibility of catching something from sitting on an unprotected toilet.

There are other dangers in the bathroom not caused by sitting on the seat. One of these dangers, which isn’t so obvious, does arise in the toilet stall. According to Dr. Philip Tierno, who directs clinical microbiology and diagnostic immunology at New York University Medical Center and Mt. Sinai Medical Center, when you flush, the germs in feces get propelled upward.

“The greatest aerosol dispersal occurs not during the initial moments of the flush, but rather once most of the water has already left the bowl,” he says. If you inhale, you’re at risk. In other words, you’ve got to beat it out of the stall fast to prevent exposure to a mouthful of contamination. Who would have thunk it?

But the biggest risk in bathroom safety has to do with getting germs on your hands when you touch a surface laden with bacteria…after getting up from the toilet seat. Faucet handles, soap dispensers, door handles, towel dispensers, sink surfaces, the flushing handle on the toilet, the floor, the lock on the stall door—all of these may harbor colonies of infectious organisms. Studies at the University of Arizona show that sinks are the worst for breeding germ colonies since the water keeps the germs alive. (It’s ironic that the place you go to wash your hands might be the very place that infects you.)

We’ve written before about the importance of washing your hands after using the toilet. Other advice offered by the experts includes using your foot to flush, using a paper towel to protect your hand when turning off the faucet or opening the door, and trying to use stalls with toilet paper dispensers covered with metal so you don’t touch toilet paper splashed with toilet water. Again, remember to run from the stall after you flush with your foot, and do so carefully to avoid slipping on the floor and hitting your head on the toilet seat, which, apparently, also is a cause of occasional bathroom calamities.

1 “What Can You Catch in Restrooms? Bathroom Paranoia.” WebMD. 19 October 2012< http://www.webmd.com/balance/features/what-can-you-catch-in-restrooms>